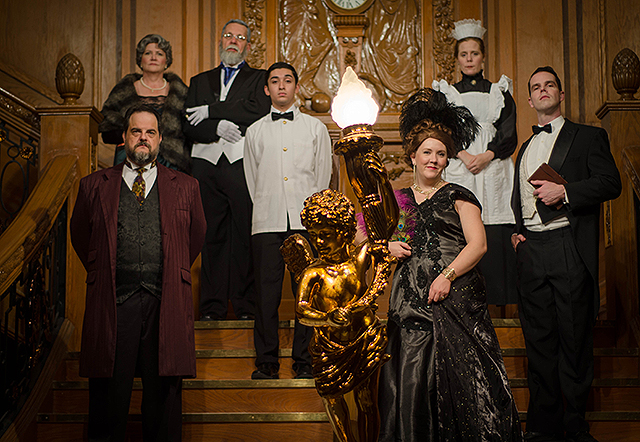 In Orlando and Las Vegas you’ll find sister museums dedicated to the Titanic, the 105-year-old shipwreck disaster made newly famous by the movie. (See our review of the Las Vegas Titanic Museum: 5 stars!). They have exclusive rights to the recovered wreckage, which you can visit during the day. You don’t need to enjoy tragedy to explore the exhibits and reproductions. Instead, acknowledge it while learning about the era, the people, and travel. Notably, they feature the Titanic Gala Dinner, a dinner theater event set on the night of the tragedy!

It’s a unique experience. You arrive to find a “shipboard” cocktail party underway. (The museum itself is a building on dry land.) Most guests dressed up for the show, but a delightful few went all the way and got their hair done like the 1910s. Throughout the event, costumed actors represent the captain, ship management, and some famous passengers. You pretend to be aboard ship on the Titanic, and are given a notecard listing a real passenger from the actual Titanic cruise whom you are to portray. You’re separated into a class system, with first, second, and third class passengers getting opulent or basic accommodations and treatment. Before dinner, you get a guided tour that sets up the Titanic and its period, as the architect of the ship explains its history. You may get your photo taken with a green screen pretending to be “King of the World!”

Then you may wander the museum. You’ll find a signal room with a Morse telegraph, a museum of pottery, and many artifacts, some of which are reproductions and some from the actual wreckage. You’ll also see reproduced the grand staircase and a luxury cabin. It’s quite interesting, though much of the items on display are reproductions, and the display cases aren’t packed with artifacts as you might expect from an art museum. Discounting reproductions, I would guess there are only 50 actually recovered wreckage items in the museum. The items circulate between Las Vegas and Orlando, so they will vary from season to season.

The main event is a sit down three course dinner with dessert. You’ll be seated in tables of 10 guests, and can either meet and speak with them, or keep to yourself, which is what our table mainly did. Everything is included except for a cash bar, while a cast of 5 performs in the room. The dinner was delicious, higher quality than you would normally find at dinner theater, including salad with dressing, steak and chicken, potatoes and carrots, and chocolate mousse. Vegetarian, vegan, and other options are available. Part of the dinner theater was educational. You’ll witness the managing director of the ship line berating the captain to push the ship faster. But the captain is worried about safety, and the passengers are worried about what they’ll do for housing if they arrive a day earlier than they’d planned to. The rest of the show was what you would expect at any dinner theater event. The characters argue comically. They give the captain a retirement party surprise. They sing happy birthday, then Alexander’s Ragtime Band. Actors engaged with us directly, which was fun, but they didn’t sit with us and get our group table of 10 talking amongst ourselves.

Unfortunately, three hiccups got in the way. First, throughout the dinner, I was worried about the comic tone set against the tragedy. Of course, the characters, being “in character”, have no knowledge of the tragedy to come. But as guests, we do. They did not make tasteless jokes about the Titanic disaster, except perhaps in the name of their signature drink, the iceberg cocktail. But the show was crass at times and parodied the rich and powerful passengers, many of whom were about to die. It put me on edge. My suggestion to the cast, after the show, was that they tell everyone in advance that it’s okay to laugh because a respectful drama is coming later, which does happen.

The cast are historians who can answer just about any question about the Titanic, but the second hiccup was that, by staying always in character, they were unable to discuss the tragedy with the guests. In the timeline of the dinner party, the tragedy just hasn’t happened yet. So the most interesting thing we’d like to learn about wasn’t really part of the first 2+ hours of the show. One way around this might be to imagine that the performers are ghosts, cognizant of their deceased status and able to stay in character but also to talk about what ultimately happens. We did learn about the tragedy later, but not in a format where questions could be asked.

The third hiccup was the quality of the comedy. Dinner theater is typically improvised from a loose script, as was the Titanic Gala Dinner, and this tends to drag instead of being sharp and witty. It’s a bit amusing when one performer sings comically badly, but not three times. If there’s going to be a second and third song, they should be performed well. There’s not much of a plot or story arc. Not much is at stake, and the characterizations are shallow. By adding background, we would come to care about the characters. To be fair, most of the guests seemed to be having a great time. So maybe the Titanic Dinner Gala is just playing to the not-too-arty expectations of their audience.

Just when I became quite alarmed that the campy dinner would turn into a campy re-enactment of the Titanic disaster, they did make a complete u-turn into a deadly serious drama, in a way that was practically two different shows. Some in the audience, possibly who had been drinking, couldn’t follow the sharp change, and called out joke lines while the ship went down, a time when passengers were frightened for their lives and many with only moments left to live. The ending was tasteful, high impact, and serves as a memorial. Where was that excellent writing during the comedy? They have a large memorial with the names of the survivors and those who perished. Guests get to look up the actual people from history that our note card said we were playing. My friend’s passenger died and my passenger lived. I wonder if they separate groups that way on purpose, to start a conversation. It’s hard to give a rating to the Titanic Gala Dinner. It’s fascinating to touch an actual piece of the Titanic, but the museum is padded with reproductions. The actors are talented historians, but to stay in character they can’t talk about the disaster itself. The tragedy at the end of the evening held a real power to it, but it’s only a half-hour end cap to a two-hour lackluster comedy show. The food was delicious and had a good variety. It was somewhat interesting to see the grand staircase and learn the history of the ship, but the cast didn’t quite show it’s importance in the history of travel and architecture, or how its influence affects us today.

I’m tempted to give Titanic Gala Dinner 4.5 stars, because it’s an important topic and creative risk taking should be rewarded. The venue and cast have great potential for more. But at a price point of $69, attendees should have high expectations. I’m glad to give the Titanic Dinner Theater a solid, worth seeing 4 stars.

Read all 11 of my Orlando reviews and suggestions, and see the Titanic Museum at www.premierexhibitions.com.