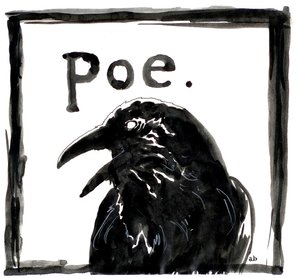 Poe is a free, spooky performance theatre event inspired by the works of horror author Edgar Allan Poe. It takes place on Boston’s North Shore in Newburyport, Massachusetts, in front of a nondenominational cemetery chapel.

The performance begins outdoors, in front of the chapel, which is grey and haunting. Ten people dressed as ravens, in black robes and with beaked masks, most of them children, walk around somberly, greeting visitors with just a look and a line of poetry on a snippet of paper. Among them, one raven swings inside an enormous bird cage, and in front of the chapel stands a haunted bride and her raven companion.

This ominous preshow is interrupted a bit by the director’s welcome, at 6pm when it’s still light outside in the early fall. Then the performance properly begins outside with a dance, and then performers welcome you to sit in the chapel pews inside.

Like the movie The Matrix, Poe cannot be explained. It is a 5-star performance that you must experience. There’s no staging and no overarching plot. Instead, the troupe acts out vignettes, some of Poe’s most popular spooky stories and poems. Musicians make screeching noises on a cello and violin, to offset kids in raven costumes chanting a poem. Then it’s so quiet that you can hear the actors breathing, in complete darkness except for at times a single candle. Performers stand at all corners of the room, seeming to surround you with haunting echoes of the words spoken before you.

Lines are taken from Edgar Allan Poe’s poems, with the bride being difficult to understand with its old timey language, and needing better diction. Then the raven children took up the poem A Dream Within a Dream and the Evening Star as though they were songs in the round, parading in a circle in a seeming cult ceremony. This start was too abstract to me, but I rejoiced that Poe is still well-loved enough to deserve such a treatment. And the performance was about to rachet up to the next level with three works performed in their entirety.

Annabel Lee, another poem, is performed by Annabel Lee’s tortured lover as a one-man piece. To me, it should begin normal and descend into madness, rather than begin deep in madness, but the haunting ambient sounds from violin and cello created a horror that does not come from startling you or grossing you out with gore, but rather from a psychological horror that twists your mind.

Then the Tell-Tale Heart was told by an actor off-stage with the aid of illustrations projected onto the front wall, which scroll to the side as the tale is spoken. This tale is told with gusto, and insane graphics support the story, black and white images that focus on individual elements of the story, or with spiders and abstract shapes.

Finally, the troupe performs The Raven. Performers make the sounds of the wind howling and the doorframe knocking in the old house. It is powerful and a rich tribute to Poe, the madness bubbling up and babbling through the verse. When the Raven speaks, all the raven-dressed children speak, in the darkness and candle light.

The show is free and low budget, but produced with theatrical creativity that makes the most of very little. A music box because the focus of horror at one point. It’s hard to explain, but it’s both a literary tribute and a genuine spook that will make you shudder and smile. Because the intensity builds, I might have asked the audience to hold their applause to the end. The show lasts only an hour and 15 minutes. As I said, it’s hard to explain. Just go see it. It’s almost unheard of for a performance troupe to wring this much emotion and delight working from so little, and hopefully they’ll build on their success to build larger productions and draw ticket sales and a profit. Some of the highest budget shows flop, and some of the smallest hit the stars. I’ll give a full 5 stars to Poe, which deserves to be taken note of, better funded, and toured regionally.

Poe is over for this year, but will hopefully come again next year. Meanwhile, you can catch Maudslay is Haunted, their Halloween event, October 20 and 21, 2018!