Old New-Gate Prison and Copper Mine is Beyond Fascinating, New England’s Only Underground Tour (5 stars) 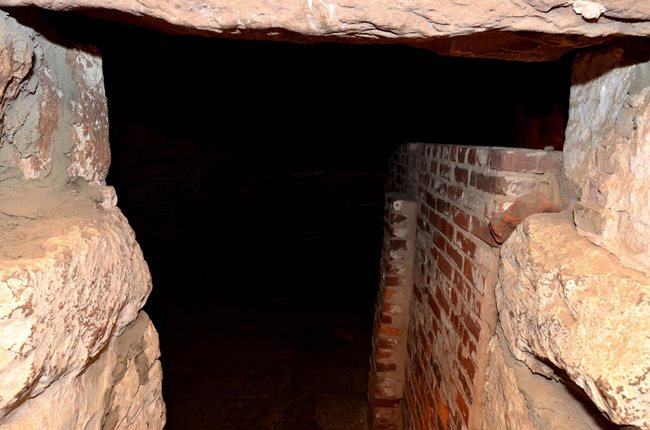 Wow! The Old New-Gate Prison and Copper Mine doesn’t look like much from their website, and I almost didn’t go, but I’m so glad that I did. It is just the kind of strange, hidden gem that I founded Events INSIDER to find.

It’s a historic destination and state-run museum that was first a copper mine in 1705, and then a prison starting in 1773. In 1830 it briefly became a copper mine again. Now it’s the only mine open to the public in New England. That’s important, because there are no natural caves in New England, despite “caves” being claimed that are just jumbles of boulders, such as Lost River Gorge and Boulder Caves and Polar Caves, or depressions that are open to the sky, such as Devil’s Den in Maine. (Okay, and there are some caves in Vermont, but you need to be a pro to go in there.) You have to go to Eastern New York, to sites such as Howe Caverns (5 stars PLUS) and Secret Caverns (5 stars) to find caves you can visit.

So if you want to head underground in New England with comfort and safety, the Old New-Gate Prison and Copper Mine is unique. It’s amazing. It’s located in-between Springfield, Massachusetts and Hartford, Connecticut, not too far from Boston. To protect the bats that home in the mine over the winter, the mine closes for tours then, and don’t worry, you won’t see bats when you go. A park ranger takes you down 33 stairs to where the mine was created using dynamite to blow out an underground space. Much later, miners came with steam-powered mining equipment to expand it more. The space varies from 35 to 75 feet below ground, and it is not a huge space, but it’s big enough, a 100-yard loop, to impress. You’ll want to wear sneakers or boots because the stone paths are uneven. With the ground as a barrier to the weather, it’s always cool in the mine, even during a hot summer day. So bring a coat if you’ll find the 55-degree temperature too chilly. (As for me, we moved enough that I heated myself up.) Grip tight to the railings everywhere to make sure that you keep your footing, and watch your head. Pro tip: wear gloves, because the metal railings are rusty. The space, of course, is not handicapped accessible.

The history of the place is fascinating. You know how copper statues turn green in outdoor weather? Underground, you can see the green steaks of copper in the walls of the mine, although there’s no longer enough copper to justify additional mining. Although on your tour you’ll descend a modern stairway, originally miners would descend straight down a single slim shaft, built in 1707, which was one of two ore shafts, a deep narrow hole where the copper ore would come up from. Going down that hole into darkness must have been like going into hell. Then the place became the first, worst, and for a time the only prison in America. They had 80 prisoners in the mine, and 60 of them weren’t even real criminals, just political prisoners in the American Revolutionary War — the loyalists who supported the British. According to the guides, the food they got served was pretty good, but prisoners had no natural lighting, no supervision, no cells, and no sewage. They were just shoved into the underground space, and yes, they had prison riots, which I’m sure would make a good Lord of the Flies show on Netflix. One space was used for solitary confinement, where a prisoner could be chained in the dark for up to 10 weeks, given just bread and water.

This being America’s first prison, the conditions were beyond awful, but it improved over time to merely inhumane. According to enlightenment beliefs of the 18th century, a prison was meant to be temporary, a place where prisoners would strive to better themselves. Prisoners who were released were reintegrated with society. At some point, they started bringing prisoners above ground during the day to work. They also built prison space above ground, most of which is now gone, but you can see stonework walls. Yes, at different times 63 prisoners escaped, but most were recaptured. Eventually, they made the prisoners wear shackles 24/7 so they couldn’t escape. Above-ground, the grounds aren’t extensive but there’s plenty to see. Old New-Gate Prison and Copper Mine, which is half an acre inside and five acres outside a 12-foot-tall stone wall. (The website says it’s 45 acres with 2 acres inside the walls, hmm.)

Prisoners baked their own bread, beans, peas, potatoes, and were rationed three pints of hard cider a day. As well as a bakery, they had smelters, an infirmary, built wagons, ran a blacksmith shop, made cabinets and baskets, a nail shop, chapel, and I’m sad to report, a whipping post. They had a treadmill to grind grain as a punishment. I never thought about that with the word ‘treadmill’, which of course I associate with gyms. No, prisoners didn’t die except for natural causes, most of the time. Old time scientists did health studies on the prisoners and surprisingly the treadmill was good exercise. There’s also an old-time tavern that is being renovated and will be open soon to the public, and they’re still restoring some of the other buildings. Of course they have a cute gift shop with books and mineral stones.

The site holds creative events, such as Bat Appreciation Day, where you don’t see bats in the mine, but they bring in some live bats from elsewhere to show off. They are very protective of the bats, because of an illness that is killing off bats. They have a Halloween celebration with live music and brews and costumed re-enactors, and even a prison escape re-enactment event! Now that has got to be great. There’s not quite enough to see above ground, and the site doesn’t show big budget infrastructure and curation such as living history guides in costume, mannequins, an audio tour, or lots of explanatory wall text. So I won’t give my rare five stars PLUS rating, but this is absolutely a must-see location if you are in the area and take an interest in history. The tour was interesting and informative, given by a few park staff and volunteers who seem to know everything, and allowed many pauses for questions. They show courage in telling the horrors of the place straight up, without either hiding the facts or becoming preachy and self-righteous. And their creative events go far beyond typical parks.