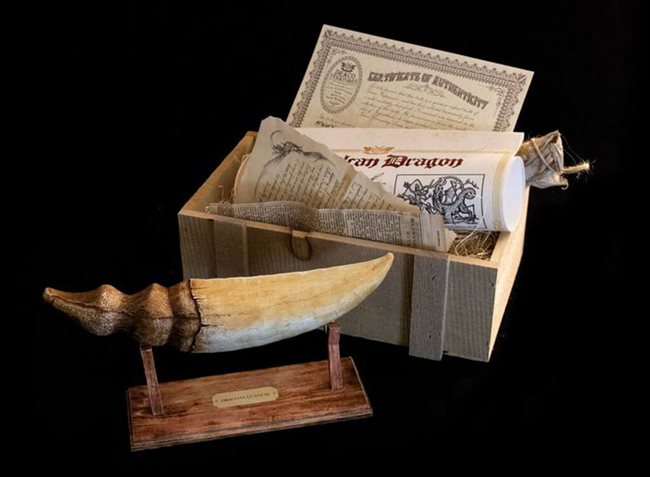 Imagine that in your parents’ attic, you find a strange old crate from the previous residents of the house. Inside you find photos, news clippings, and some keepsakes from 100 years ago, and piece together the life story of the original owner. You are amazed to discover that they were secretly mystic cultists or science fiction adventurers.

That’s what happens when the Mysterious Package Company ships you or your friend one of their experiences. It’s a letter or wooden crate that contains an adventure story, told through its contents.

I purchased a science fiction themed experience for a friend, The Disappearance of Cadet Turner, which is not scary. First a letter comes, and then a crate with futuristic items and clues. You can simply observe and enjoy them as a visual conversation piece, or work through the clues. There’s a simple task that one needs to complete to get the code to unlock a secret message in a virtual tape recorder, and more. The package “The Disappearance of Cadet Turner”

Mysterious Package Company also kindly agreed to send me their experience, The Crate of Cthulhu. It arrives in a cardboard box, which you open to discover a crate, which you must pry loose — that’s part of the experience. Then you discover an old cult statue and a story. It’s surprisingly authentic looking for the cost! (Prices for mysterious packages range between $80 and $300, including shipping.)

It’s intriguing, weird, and a lot of fun to piece together the story. The Crate of Cthulhu is more of a straightforward story, so there were no game-like puzzle challenges, just newspaper clippings on realistic looking browned paper, and a story printed out in a font that looks like old-timey handwriting. Because I had carefully unpacked it, I was able to carefully pack it up again and send it to my friend Wendy as a surprise. On the off chance that she might get freaked out, instead of enjoying the prank, I also told her daughter the surprise and swore her to secrecy. Wendy loved it, again repackaged it, and used it to try to prank her daughter, not knowing that she was already in on the joke! Here is Wendy’s video, shared with you by permission, which only has the mildest of spoilers (showing the box contents).

Jason Kapalka kindly agreed to speak with us.

Events INSIDER: How did this idea come to you and how would you describe it to someone who had never heard about it before?

Jason Kapalka: The Mysterious Package Company, as the name suggests, sends mysterious packages to people as gifts. And sometimes as unexpected gifts… in between a prank and something a little more ominous.

Jason Kapalka: You would receive a strange letter from something like a law firm purporting to represent some long lost relative that you’ve never heard of before. Mentioning that they had left you something in their will. And it would appear to be more or less real, as truthy as we can make it.

Jason Kapalka: And, the law firm might have a website, no one might answer their phone number, but they’ve got a phone number. And then that would be followed up by a series of unusual things in the mail. Sometimes, two or more different packages, things like journals and newspaper clippings, small trinkets and artifacts, usually leading up to the delivery of a large wooden crate they’ve got to pry or break apart. Typically it’s nailed shut.

Jason Kapalka: And inside that is the conclusion of the sort of spooky or science fictional narrative that you’ve been getting, along with some sort of large artifact, sometimes a voodoo doll, or a Cthulhu statue, or other strange ray guns from the future, stuff of that nature. The package “The King in Yellow”

Events INSIDER: It’s a lot more than a gift. It’s really an experience.

Jason Kapalka: We do refer to them as experiences and they are a combination of those things. Sometimes they are a little bit like an escape room in a box. Sometimes they’re more story oriented. So they’ll have lots of things like written narratives or in some cases video or audio narrative almost like a radio play. Often there are puzzles.

Jason Kapalka: Sometimes it’s very elaborate, sometimes simpler. And a lot of cases they will be multimedia and they involve doing research via the internet. You might get, for example, a cassette tape, supposedly from a 1980s Norwegian death metal band, that will lead to an Internet fan page for the band, with lyrics that are a clue towards the mystery that you’re trying to solve.

Events INSIDER: What’s the level of difficulty? Do you have to be a gamer to enjoy it?

Jason Kapalka: We try to make sure that they are accessible to people who have different levels of interest. We have some experiences are a little bit more puzzle oriented and some that are more, again, narrative, or just sort of fun that don’t necessarily have mandatory puzzles. So we range all over the map with it, depending on the nature of the thing. And some are definitely scarier than others. So we try to put warnings on them so that people don’t send something really scary to someone who’s not expecting it.

Events INSIDER: When you say narrative, you mean that it’s not quite as interactive, so that you don’t have to think hard or solve anything, as you open and look through the crate’s contents. Instead, you get an experience that unfolds. And sometimes you get more than one mailing?

Jason Kapalka: Yes, you might receive a letter first, and then a journal that goes into more detail. And then, some artifact with, for example, a USB stick with an audio recording of it, that concludes the story. So yes, you wouldn’t necessarily solving puzzles, but you are putting together a story over the sequence of things received in the mail. Events INSIDER: I’ve read reviews online that have suggested that you do a really good job of making these clearly computer printouts look like they’re ancient and they’re brown and they’re wrinkled. And, somehow, in only a $200 package, including shipping, you can fit some objects that are actually worth keeping on your bookshelf as a memento.

Jason Kapalka: We definitely try. Almost everything is hand crafted in a form. We have a lot of “experienced forger”, who make things look as believable as possible. So we do a lot of aging of documents. We’ve got a whole area set aside for tea dying documents.

Jason Kapalka: We’ve found that’s one of the best ways to make things look old is you have to dunk them in tea and then hang them up to dry. So we have different levels of different kinds of tea and different amounts of soaking and all these things to achieve different levels of oldness. And we’ve done different kinds of dirt and dust to put inside crates to make them look either 10 years old or a hundred years old. So it’s a compliment for us when we occasionally have people who really can’t tell. We’ve occasionally had packages stopped by customs because they thought it was an actual archeological find, such as a statue from some ancient Peruvian dig site.

Events INSIDER: For people who aren’t really gamers, do you have a recommendation of what they might want to start with?

Jason Kapalka: We do have a number of packages that are a little less scary or in depth as far as puzzles go. I think currently we have one called Tempus Fugit, which is a time travel romance story. That has been updated with some new stuff in there. And that’s the one that’s not particularly daunting in terms of puzzles or anything. And is a little more romantic than some of our Lovecrafty inspired things.

Jason Kapalka: There’s also one called a Cadet Turner that was recent, which is a little more family oriented. It’s a bit like in the Stranger Things mold in that it’s 1980s oriented, a “young adult” level of material. So that it’s suitable for teens or families to go through.

Events INSIDER: I’ve reviewed many escape rooms, and some of them are built by people who love the mechanics of it. They know how to make a glowing orb that drops from the ceiling. But often there’s no story. It seems like having a real story is important to your mysterious packages.

Jason Kapalka: There are definitely some escape rooms that are really very lightly themed. It’ll be, “Oh, a mad killer has locked you in a room and now you have to solve Sudoku puzzles to get out.”

Events INSIDER: Which aren’t related at all, killers and Sudoku. There’s no story.

Jason Kapalka: Yeah. Most of the puzzles we do, we do a lot of work to make sure that they are very carefully integrated into an actual storyline with a lot of ambience and color from whatever period or location that they’re supposed to be.

Events INSIDER: And, beyond just the story, there’s the ambiance of the artifacts. It’s like “special effects” for a book. Then once you’ve solved the puzzle, you’ve got a memento to put on your bookshelf.

Jason Kapalka: Right. When you have a giant statue of this guy sitting on your shelf and it’s pretty weighty, it functions as a piece of art in its own right.

Jason Kapalka: And maybe it has some runes on the back, which are a part of the puzzle. But, afterwards it’s just a cool looking thing. Depending on the experience, some have bigger or smaller artifact components. But we do try to make them all quality, handcrafted.

Events INSIDER: And what is the Curious Correspondence Club? Instead of getting a heavy crate of artifacts, you receive a mysterious letter every month?

Jason Kapalka: It’s a little lighter and easier to get into, while still keeping a lot of the same puzzle solving and ambience. They are individual monthly puzzle experiences that will be shipped to you each month, for approximately $20 a month or per experience.

Jason Kapalka: There is an ongoing narrative to it. And it’s involving an ancient conspiracy and secret societies. It’s lighter than our usual stuff in that you can use it just as a standalone puzzle, or you can follow along with the story.

Events INSIDER: If I send a mysterious package to a friend, how spooky is it?

Jason Kapalka: We try to keep it on the side of being a little bit spooky. And the ideal for us is that with some of the products, that when you get them in the mail, you’re pretty sure it’s a gag, or a put on, or a fake, or whatever, but ideally you maybe have a 2% thought of like, “Huh, I wonder. I’m pretty sure this is not real, but, I don’t know. I’m not 100% sure.”

Jason Kapalka: So that’s the ideal level of spookiness, a 2% spookiness factor of what if this really is an evil, haunted Cthulhu statue or whatever.

Events INSIDER: Thank you for speaking with us!