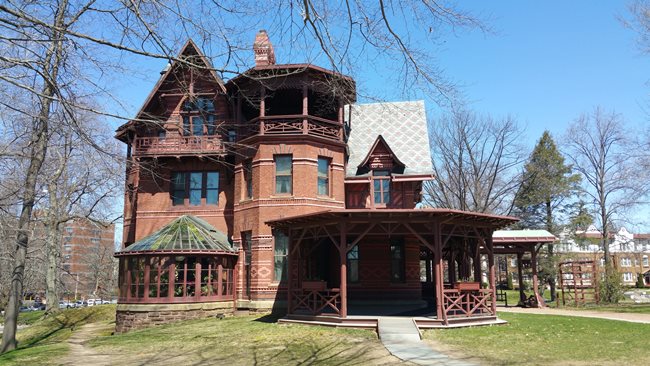 Mark Twain, the 19th century author and humorist, lived in Hartford, Connecticut, and wrote many of his best works there, in a home that you can visit. Next to it, they’ve built museum that’s large enough for rotating exhibits and a diverse calendar of events. Its location, on the same grounds as the Harriet Beecher Stowe House, is my favorite destination in Hartford.

If you go back far enough in time, there’s something wrong with every hero. Benjamin Franklin was a slaveholder. Even John Adams was not a full blown abolitionist and restricted free speech. So it’s refreshing to have Mark Twain. He is perhaps the oldest American celebrity who was modern in every sense. He was against American empire-building and critical of the power of religion. He spoke out for the abolition of slavery, women’s rights, the labor movement, and the fair treatment of animals. It’s delightful that we have a museum dedicated to him and his historic home to experience what his life was like.

Thankfully, instead of carving out part of the old home for museum space, the Mark Twain Museum is a separate building next to Twain’s former home. On the first floor is the Aetna Gallery, a permanent exhibit with a timeline of Mark Twain’s life, including an old printing press, a writing desk, and original books. The room is too crowded, which can make one feel overwhelmed, and too poorly lit for concentration and reading; if the intention is to keep the books fresh, they could be kept in display cases with tinted glass. But you’ll find plenty of well-curated placards to read, with plenty of seating, and even audio recordings including The Monkey’s Paw, a ghost story. The exhibit is small and works well if you just want the 5-minute background on Twain. Or dig deep into history.

Upstairs is a cafe and space for rotating exhibits. This time, it’s about the pets of Mark Twain. Twain was such a powerful force in literature, society, and had such a colorful home life with his human family that the pet exhibit seems self-indulgent, but I get it — people like animals. The museum also features a performance space with a notable and creative variety of events, starting with author talks and writing workshops, but with many other opportunities to get immersed in culture.

Down the hall, you’ll discover an extensive gift shop with far more than the usual books, mugs, jewelry, and clothing. You’ll also find Mark Twain dolls, glass ornaments, tea, “Huckleberry Fizz” soda, and whimsical gifts such as a box of “emergency mustaches”, night lights, and a corn cobb pipe. Thankfully, the lobby has plenty of seating for weary tourists. Access to Mark Twain’s historic home is only through guided tours, of which you’ll find several on any day. For example, you can get a “Ghost Tour” which leads you through the house with tales of hauntings, explaining how Mark Twain took an interest in the supernatural. Tour guides, I learned, are given leeway to add their own flavor to Twain tours. One guide told us that he begins his Ghost Tours definitively categorizing the ghost tour as just-for-fun, with the paranormal not to be taken seriously. Unfortunately, another Ghost Tour guide, the one that we got, first said that she believed the house was spiritual like The Shining, and next, that ghost hunters had taken photos whose flashes and strange shadows were probably spirits. That was just two minutes into the tour, so fearing more of the same, we left. It’s not just that paranormal stuff is anti-intellectural, anti-science, and should have no role in an educational place such as a museum. It’s also that, when people are pressed to believe that their dead relatives are alive, this causes trauma, which palm readers and ghost hunters feed off of to make money, which is illegal in many places.

However there are many other Mark Twain house tours to choose from that will leave you inspired and wanting to write your own Great American Novel. Instead of the standard house tour, we took a Living History Tour, led by Anne, a re-enactor portraying Twain’s favorite daughter, Suzy Clemens, aged 17 in 1889.

Anne showered us with childlike energy and mischief in the tour, telling us many funny anecdotes. She seemed to know everything about the family, being able to answer any question. Her staying in character through every room was fun but unnecessary — suspension of disbelief not being an issue in a house tour — and forbade us from asking questions about Twain’s “future”, but we did get to ask those questions at the end of the tour when Anne broke character. Twain tours are cleverly routed to wind through the house so that more than one visitor group can come through at a time. The living history tour ends in the basement, where guests were allowed to handle some old-timey items and photos. It was fascinating to learn about Mark Twain’s home life, but the tour does not cover the basics about Twain. So this would not be the tour for your first visit to the Mark Twain House. Perhaps some overmuch detail on the many rooms in the three-story house could be put aside to find time for a short overview of Twain and his legacy for newcomers. Our guide offered to get out chairs on request, but visitors were naturally hesitant to interrupt the tour for this. Standing for an hour does undermine one’s concentration, and we appreciated the many chairs at the next door Harriet Beecher Stowe House. Perhaps in the Twain house, one or two chairs could be placed at the top of the third floor stairwell or elsewhere, or some of the genuine old furniture could be swapped for reproductions that guests are allowed to sit on.

Other Mark Twain family members also give Living History Tours, and their events calendar is full of delightful twists such as a tour based on Clue, the board game. It’s the most creatively themed old-time house in New England. (Second, I suggest the Gore House in Waltham, whose estate is large enough for big festivals.)

Despite a few of nitpicks, I cannot more strongly recommend the Mark Twain House and Museum, which deserves an easy 5 stars. It’s the home of perhaps America’s best-loved historic author, lovingly preserved and presented, with a modern and interesting museum next door and the Stowe Center so conveniently nearby. Accessible to those who love reading and those who don’t, and important to history, it is a must-see for everyone who visits Hartford.