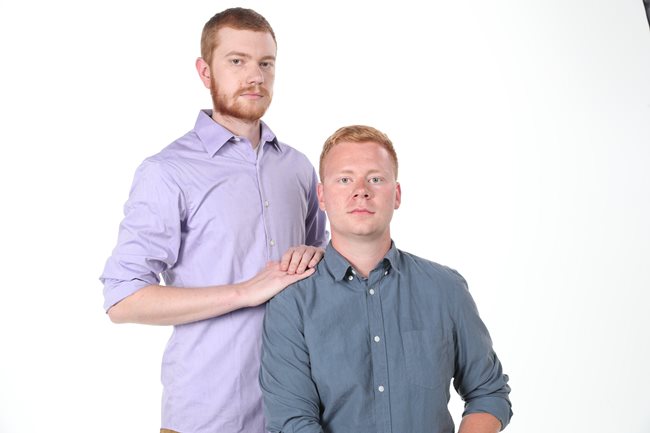 Guys guys guys! (And laaaaaaadies.) I’ve got to tell you about this new comedy duo, Jacob Godbey and Alex Tait, who run the Ginger on Ginger podcast and a comedy show called Gingers on Ice. They are both red-heads.

If you’re like me, the virus is stressing you the fuck out. In the shower, going to bed at night, doing chores… I just can’t get my mind off of it. So I’ve been listening to comedy podcasts. There are some great ones out there, but sooner or later they start complaining, getting edgy about cancer or the Holocaust.

That is NOT what I need after a year of virus, politics, and social isolation. Or, the flow isn’t right. For example, I love the podcast Hollywood Handbook, but they get stuck in conversational dead-ends, which is boring, and my brain goes right back to worrying about personal and national crises. Also, I’m a Bostonian, so comedy doesn’t work on me. Boston is known as one of the toughest towns in America for comedians. We just don’t laugh easily. We’re either smart enough to see a joke coming, or we’re stoic, like the Pilgrims who wore belts on their hats, as though cinching their heads tighter.

Well! Like Ben Franklin with his kite, Ginger on Ginger struck me this month like lightning. I kid you not, I could not stop laughing at their sketch videos. I even found myself laughing at the setups, before the jokes. Their podcast is funny and comforting, too.

Coming from Montana, a place whose postal abbreviation is literally MT because it’s so empty, and features a town that is spelled Butte, Alex and Jacob bring an easygoing style that has Midwest charm but delivered with liberalism, not country music topics like trucks and Jesus. Their sketches are silly but intelligent, perhaps inspired by Monty Python. It’s the perfect antidote to social isolation trauma. Alex and Jacob kindly agreed to a video interview. We talk about cows, getting knifed in an alley, their cooking show, finding a comedic voice, and almost dying on the Grand Tetons, which are mountains named after boobs.