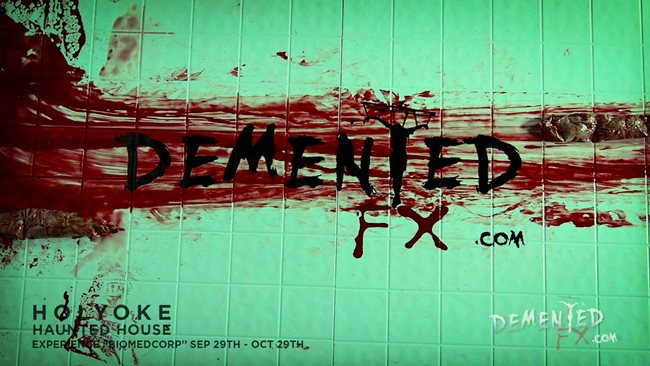 Based near Springfield, DementedFX is an all-indoor attraction, making it all-weather, that has the best production value I’ve seen in New England. Formerly in Easthampton, they’re now in their 5th year, in Holyoke, Massachusetts.

To make waiting in line friendlier, their queuing area is painted black like a nightclub, dominated by an airplane with flame effects hanging from the ceiling, and zombie murals. They play rock music and project music videos (which could use captions), and have two bars with wines, seltzers, malt liquor, soda, and special beers including Angry Orchard, Pumpkinhead, Sam Adams Octoberfest, Sam Adams IPA New England, Be Hoppy, Bud Light, Coors Light, Blue Moon, and Heineken. Outside on the street, a vendor sells cotton candy, fried dough, chips, and corn dogs.

Backstage, you can even buy access to their VIP area. VIP seating must be paid in advance, a private area from which you can hear the music but it’s not too loud for conversation. It’s classy, a far cry from the semi-pro Halloween attractions one finds elsewhere. Following the night-on-the-town theme, visitors tend to be young adults, not teenagers, but kids as young as 13 are allowed to come. They have dioramas you can pose with to take photos.

Once you’ve had your fill of the central area, DementedFX is a single 20-minute attraction, once you’ve passed through a buffer room with a safety video, which is fun and high-energy. Once you’re walking the haunted corridors, they don’t want the surprises to be spoiled by your seeing what happens to the group ahead of you. So more than any other attraction I can think of, they pay remarkable attention to spacing out groups of 5-7 people, and then actors inside will hold groups that are advancing too quickly on the group ahead of them.

Thankfully, DementedFX has a theme, which they stick well to. Through watching a video you see that a mad scientist at the Center for Disease Control (CDC) has discovered a cure for the zombie outbreak. Your job is to fetch it, or something. Then you walk through a building that looks like an office environment or science laboratory.

For Halloween, I’d rather be in a spooky cave, forest, dungeon, or just about anywhere than an office building, but they do the perhaps best job I’ve seen in New England of set design. Even in the ordinary corridors (where you’d normally find filler like hanging cloth strips) they’ve added fake slime or tendrils to the pipes and walls, or vinyl siding and professionally designed office signage. And it’s full of room-sized special effects. You’ll get into an “elevator”, and the whole thing shakes. At one point the ceiling of an entire room caves in towards you. Wow! It’s the first theme park quality attraction that I’ve seen in New England, with possibly one or two exceptions such as the Haunted Graveyard.

As someone who geeks out on Halloween destinations — how to optimize them for the perfect visitor experience — I was blown away by how DementedFX gets the experience right. When there’s a crawl space, they have padding for your knees. Twice live actors with real dialogue re-stated our goals and helped us get in the mood. They have a “laser lake”, a room of fog lit by a plane of laser light, and thought to shape it into a maze, so that you spend more time crossing back and forth through the room. (Such laser lake rooms typically let you walk directly to the exit.) The creators of DementedFX combine the customer genius of Steve Jobs with the monster genius of Stephen King.

The backgrounds don’t depart too much from the ordinary — you’ll go through a haunted locker room and a haunted bathroom — but the place is perhaps the strongest attraction in New England with its animatronics. You’ll find at least a dozen 10-foot-tall moving monsters, plus dozens more of smaller moving creatures. A mannequin pops out of broken window. There’s a giant demon head puppet on a wire. You’ll pass vats where scientists are growing evil creatures. You’ll get sprayed with mist and a blast of air. There’s plenty of laboratory equipment including possibly a real centrifuge. The attraction has no serious flaws, but the zombies have only street clothing and basic makeup. In some places you will find filler such as walls with blood spatter or strips of hanging cloth or plastic. Excepting the two actors who orient you, the acting is not strong — it’s just monsters growling at you. Walkways are even, with no tripping hazards. One corridor is filled by inflatable walls, so that you and your face must squeeze through them; I always wonder whether anyone ever cleans them. Better signage (or a staffer) is needed to help drivers arriving at the street address to find the parking lot out back; street parking is available but limited. I don’t know that having two bars is quite the trick if visitors must actually queue, which keeps them stuck in place. At Fright Kingdom, another all-indoor attraction, they give out numbers, like you’d take a number at a deli, so that visitors are free to roam the common area shopping vendors.

Events INSIDER: DementedFX is a new concept in Halloween. It’s a haunt plus a bar?

Jeremie LaPointe: We wanted to create a whole experience, so while you’re waiting in line, you have the ability to have a drink, watch music videos, and have cool scenery. That way, the wait is not tortuous. We want the wait to be fun.

Jeremie LaPointe: We run groups of six to eight people every 2 minutes 45 seconds on average. That gives a gap between each group, so that it’s not nuts to butts. We don’t want people to see the scares prior to, we want it to be fresh for every group.

Jeremie LaPointe: The idea was, while you wait, I want to entertain you. Because I don’t want you to sit in line for two hours and say, I didn’t have fun. The haunt is a half hour. The wait is two hours, so I want you to come and have an experience that’s amazing. Regular admission is $25 and the VIP is $50. The full VIP experience is by reservation only, you can only do it online, and we only book 20 an hour.

Jeremie LaPointe: I really want them to have fun while the wait. The waiting is as important as the venue.

DementedFX has best-in-class animatronics, best-in-class set design, and a best-in-class understanding of the details of the customer experience. They get Halloween right on every level. While I’m not completely convinced that they’ve made it fun to wait in line, it’s a lot more fun than not trying. (So many attractions are just the line and the haunt, with no midway, campfire, or carnival row to relax.) Indoor Halloween attractions have two inherent limitations — unlike a woods walk there’s no naturally spooky night sky or dark trees, and unlike an outdoor attraction there’s a serious limit on the length of the route. Despite these handicaps, DementedFX is the perfect Halloween destination. If they ever relocate to an indoor/outdoor location, their attraction could be #1 in New England.

I’ll give DementedFX a full 5 stars, making it one of only 11 Halloween destinations at the very top in New England. And they are my #1 pick in New England for animatronics.

For more, see dementedfx.com,  and note that their video is abstracted rather than representative of what you’ll experience in the haunt.