The Attleboro Community Theatre Deserves More Funding and Attention for Shows Like ‘I Hate Hamlet’ (4.5 stars) 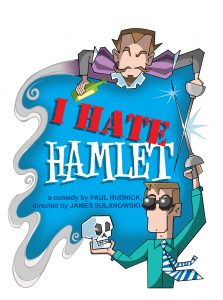 Andrew Rally is an actor just fired from a TV show that was pure drivel. Should he continue making money in unfulfilling TV work, or take an artistic direction by playing Hamlet on stage, earning nothing? The play begins when Andrew and friends gather in the apartment of legendary actor John Barrymore, who has long been dead. But then they begin a seance!

I Hate Hamlet is a comedy from the 1990s produced by the Attleboro Community Theatre, in Attleboro, Massachusetts. It’s hard to make a comedy that works, but it does! On a shoestring budget, with volunteer actors busy with their day lives, they’ve gone beyond the script to create physical and tonal comedy that make audiences laugh (and smaller audiences don’t laugh as easily). I also learned that the production is entirely original, so its flourishes and stage setting are not borrowed from a previous run.

Thus it’s a real achievement that I Hate Hamlet is laugh-out-loud funny. I enjoyed myself so much that I put down my notepad for taking review notes and forgot it for a half hour in the middle of the show.

The play is performed in the basement of a Masonic Lodge, with seating for 150. They have the best snack bar I’ve ever seen at a theater show: all homemade desserts and pay-what-you-can. The stage (by James Sulanowski, David Blessinger, and Paul Nolette) is an apartment with a medieval theme of stone archways, stained glass, and a hearth. The set features interesting gimmicks, such as a balcony, to give the actors variety of location. Notably, as a long empty apartment, its furniture has been draped with dropcloths, allowing the cast to unveil surprises. There is even a fog effect, although a note to the lighting designer: it’s spookier if it’s darker. Also, fade in to a scene slowly, but don’t fade out slowly: going straight to dark puts a ‘button’ on it (a snap).

I once took a girlfriend to Broadway, where we saw seven shows in three days. But I only enjoyed three of them. It was a lesson that expensive tickets and high production value don’t make a show — passion and creativity do. Although it’s tempting not to expect much from community theatre, their cast and crew must have fierce passion to commit to a show despite not being paid and having busy lives. The Attleboro Community Theatre is just as good as some larger shows I’ve seen, plus you love to root for an underdog cast.

Although such rooting is needed at times, the cast exceeded expectations. Andrew, the lead, is played by Benjamin Shane Christie, a natural talent in his first performance! He looks like Christian Slater and has the gift of making every line in the script twice as funny with a put-upon, straight man reaction. Actually, the entire cast went all-in with their humor. In comedy, you need the courage to be totally committed to a role’s eccentricities or the audience can sense weakness.

It works. The script is genuinely funny, which the cast makes even more funny with their delivery. Alicia Harris (Felicia) does nutso voices. Rebecca Cunha Christie (Deirdre) has manic energy that explains her character’s strange choices and passions. Husband and wife in real life, Christie and Christie bring a back-and-forth chemistry to their banter. Stephen L. Hug (Barrymore) has very long fingers, used well for gestures that helped him balance his character’s elite status yet cordiality. Dave Almeida (Gary) had larger-than-life body language and perhaps the biggest laugh of the night when he suddenly encounters a specter from beyond the grave. Instead of screaming, he says nonchalantly, “So who’s this?”

Thankfully, the script is accessible, for example having characters restate their goals often, so that you never get lost as to who is trying to do what. That being said, the character arcs for Barrymore and Lillian don’t seem to go anywhere, and the second half of the play is less engaging, perhaps in an attempt to avoid an easily seen ending. Talking about sex is a major theme of the script, and there’s a moment of vulgarity. The major takeaway of the show, written in 1991, isn’t hugely convincing, in the modern era when actors like Patrick Stewart (Star Trek: The Next Generation) so easily cross between making cash slumming it with TV and movies, and then using his fame to reach artistic heights on stage and in more artistic movies.

There’s a little stage combat (with fight choreography by Chris Cardoni) that is entertaining but not notable. Elizabeth Parent (Lillian) should lean more into her German severity for comedy. Kudos to propmaster Jessa Leavitt for coming up with an old-time globe liquor container and lighting fixtures that look like hands are sticking out of the wall holding the bulbs! I was glad to sense that the cast planned enough rehearsal time that they could go beyond getting the play down verbally, to polishing their physical comedy, which their production is loaded with.

I Hate Hamlet goes well beyond expectations for community theatre, and perhaps it’s time to drop the ‘community’ in their name, following the example of the Stoneham Theatre which rebranded itself as the Greater Boston Stage Company. If all their productions have this much heart and emotional impact, the Attleboro Community Theatre has done a lot with (presumably) so little. They deserve greater funding and press attention. I’m glad to give I Hate Hamlet 4.5 stars.