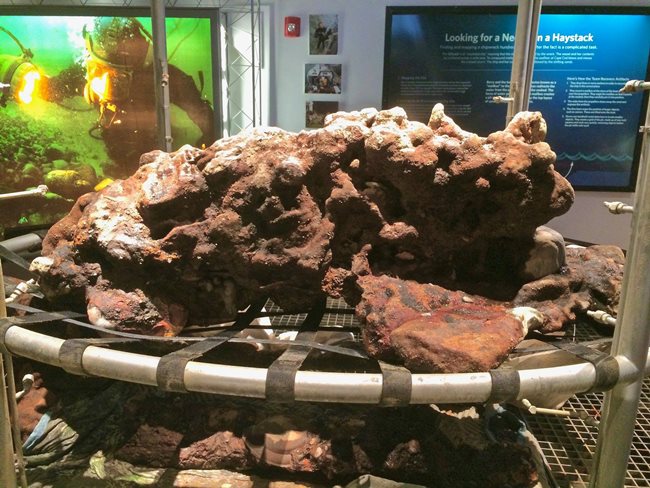 In New England, we don’t know how lucky we are to have such great arts. If we didn’t have New York City so close by, I think we’d feel it more. Other areas of the United States don’t have, for example, our strong regional museums. Who would have thought that you could travel to Yarmouth on Cape Cod and get a world class experience, a museum about pirates?

The Whydah (that’s “WIH-duh”, the name of the ship) draws you in because it’s the world’s only genuine pirate shipwreck that was recovered with a treasure. But the museum is much more than that, telling the history of pirate crews. Pirates weren’t nice people, but they did operate with some democracy and with racially mixed crews. The pirates stole the Whydah, which was originally a slave ship, an issue that the museum bravely highlights instead of skirting.

Unlike the Boston Tea Party Ship and Museum, which I also love but only has one genuine historic artifact that is not a reproduction, the Whydah is a literal treasure trove of real artifacts. You’ll find a cannon, weapons, the original ship’s bell, tools, and even concretions (ocean silt compressed into rock) with bones. Yo ho! You’ll also find extensive reproductions, including a ship you can walk through, dozens of wax figures, with environmental sounds such as sawing wood, taking apart the original Whydah’s slave beds. They’ve got video, example knots, and the highest quality interactive exhibits. You can walk through on your own, or there’s a self-guided audio tour. Plan to spend two hours there. It’s astounding. Take it from me, a supposed intellectual but someone who can often find museums hard to access, they accomplish two things that are hard to get right.

First, the museum is just as accessible to kids as it is to adults. You can take a deep dive into the history, or just wander through the Whydah enjoying the pirate flags, exhibit on female pirates, and videos showing how the salvage of the wreck began and is still ongoing today. Second, unlike the New England Pirate Museum in Salem, which I love, but it is a bit touristy / hokey — How much do pirates pay for corn? A buck an ear! — the Whydah is substantive, intellectually nourishing.  It’s all true stories told by the survivors of the wreck and in the diaries of others.

You’ll learn the story, for example, of a young boy ran away from home to join the pirate crew. You’ll learn how they used scare tactics to take 48 ships without having to fight. The pirates once staged a theatre show that got mistaken for real by shipmates and caused a fight to break out. And yes, you can see a wooden treasure chest with hundreds of pieces of silver. I’m glad to give the Whydah Pirate Museum a rare five stars PLUS, making it a must see. And check out the nearby Edward Gorey House, which is not a must see but will amuse you with its dark humor, macabre cartoons.