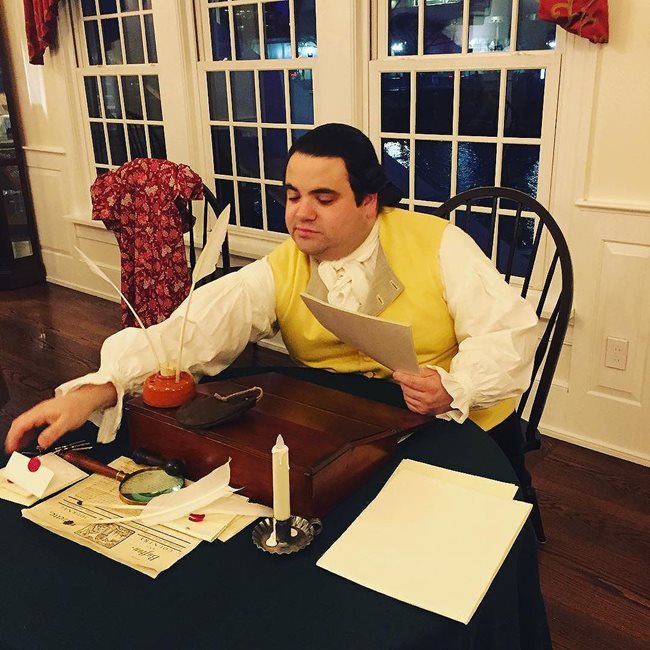 The Boston Tea Party Ships and Museum is a must-see attraction where you can meet colorful characters from colonial times and learn about the Tea Party incident and how it related to the American Revolution. You can even participate in throwing tea overboard!

They also have fantastic celebrations including Huzzah! Tavern Nights, where you can eat dinner on site and meet Samuel Adams, John Hancock, Dorothy Quincy, and other Bostonians from the past.

This Valentine’s Day, they featured Unconditional Love: The Letters of John and Abigail Adams, a nighttime event that takes place after the museum has closed for the day. It’s a reading of love letters from John and Abigail Adams to each other. John Adams took a leading part in the Constitutional Convention and eventually became President of the United States. The old-timey limits of travel and communication often led them to write letters to each other, many of which show humor, joy, love, and wit. Normally, when learning history, we only hear of the dates and facts. This event shows us real people and their strong love. Huzzah! Tavern Nights is a separate. and recommended, event also at the Boston Tea Party Museum.

Though the show, set for Valentine’s Day, is meant for couples, being seated at tables of four (your couple with some other couple) with the lights fully on detracted from intimacy. You can choose a free drink as part of admission, including hot apple cider, hot chocolate, and variety of alcohol. They serve a snack platter including macaroons, small pastries, grapes, cheese, and crackers. The show has an intermission.

The letters are read by actors dressed in old-timey garb, portraying John and Abigail. Thankfully, a narrator gives context for each of the letters read, so that we have a sense of what they’re writing about.

The acting was good, but primarily vocal, since actors spent most of their time seated, pretending to write, looking away from the audience and away from each other. This posed an issue. By analogy, when you see a Shakespeare play, you’ll find the Old English hard to understand — don’t we all — but the staging and actors’ body language help comprehension. At Unconditional Love, we get a vocal interpretation but no scenery or body language to help us with the (less old-timey, but still problematic) language. Unfortunately, accessibility was a problem. The 18th century prose gave us hints of love and humor, but most of the time, we just couldn’t follow the show. It must have been worse for attendees new to this era in history. I was disappointed that the narrator assumed knowledge from the audience and didn’t introduce who John and Abigail Adams were, the future President and First Lady. (Their web page describing the event also fails to tell.) My suggestion would be to cut out or shorten excerpts from the letters, allowing time for more narration, and to add character interaction in the style of how John and Abigail Adams interact in the stage musical, 1776.

I’m a lifelong Bostonian who loves historic re-enactments so much that the word “re-enactment” is found on the Events INSIDER website 557 times, and that doesn’t count social media. Oh, and I’ve woken at 4:30am for the Battle of Lexington and much else. So it’s with love that I am forced to say that this show did not live up to our hopes for an intimate, educational, and moving evening. Their exhibits during the day are first rate, but they’re not part of this show.

We did learn a little, and saw glimpses of love and humor. Read my 5-star review of the Boston Tea Party Ships and Museum itself, but for their show, Unconditional Love: The Letters of John and Abigail Adams, call it 3.5 stars if this would be your first colonial re-enactment, or 4 stars if you’re an enthusiast.

For more, see www.bostonteapartyship.com. It might not be too late to get tickets for Unconditional Love this Valentine’s Day week.