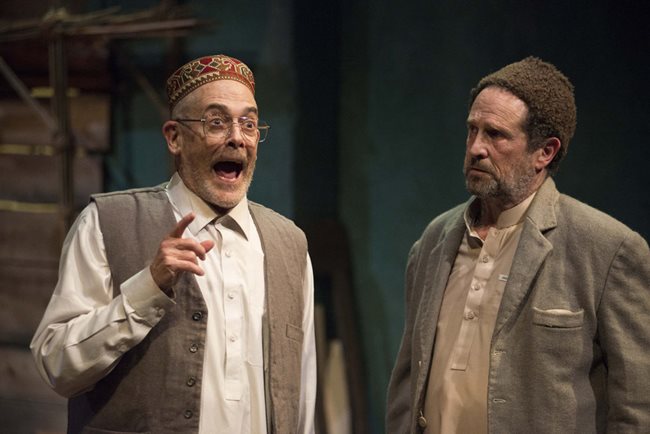 During the Afghanistan war, what happens to the two last Jewish people to stick around in Kabul? They need a new Torah, so they decide that they’ll write their own. Ishaq (Joel Colodner) is a scholar and Zeblyan (Jeremiah Kissel) is full of annoying questions. It’s comedic as they bicker and argue, and one that makes many points about Judaism and faith.

In addition to the cast of two, two musicians on the edge of the stage play music between scenes, on drums, tambourine, and a string instrument like an Afghani sitar. The set, by Jon Savage, is stunning, a synagogue designed with crumbling walls as if bombed. Rewriting the Torah is an excuse for the characters to criticize and defend the stranger writings. Although the play goes from topic to topic without much plot, and some of its insights aren’t stunning, some are.

The New Repertory Theatre is a wonderful venue that’s conveniently close to both Boston and suburbs, and with its location next to the Watertown Mall, you’ve got shopping as another reason to visit. The venue’s halls also serve as a museum.

The play is best understood as a drama that has some comedy, rather than a comedy, and the ending didn’t strike me as hilarious. As someone who is not Jewish, but who has learned about Judaism through books and movies, and married a secular Jew, I did not find it as accessible in explaining Judaism to a lay audience as I would have liked. For example, Hype Man at Company One, which I reviewed earlier this year, explained racial issues and hip hop very well to its mostly white audience. I kept wondering why these two gentlemen did not just get the heck out of there. I know it involves thousands of years of history and a devotion to God so determined that it can drive you crazy, something the show acknowledges and pokes fun at, but with love. Still, there’s no doubting the power of Two Jews Walk Into a War. The acting is compelling, the set design is perhaps the best I’ve seen this year in supporting the mood of a show, and there’s so much angst and confusion of the two devout Jews in their earnestness to understand God. To me, it’s more of a drama than a comedy, but worth seeing, especially if you are Jewish or close to that community. I’ll give Two Jews Walk Into a War 4 stars.