At this time of the year beach bums begin to lament the loss of the summer. For a few months, the sun shines bright and hot while the party moves outside. For summer lovers, there is nothing better than cook outs, swimming pools and cold drinks on hot nights. Late August signals the waning of such days as the seasons turn to fall.

For many though this means it is a time to celebrate as the haunting seasons approaches. The leaves begin to change from the bright green of spring to the tawny shades of autumn. The sun sinks a little sooner in the west as the nights grow colder. It is time for pumpkin spice drinks, long sleeves hoodies and best of all, Halloween. For 2022, New England is blessed with a new harbinger of the spooky season and that is what the Silver Scream Convention intends to be. 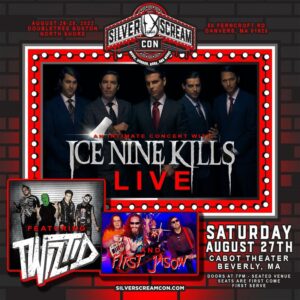 The convention is driven by Boston based Heavy Metal band Ice Nine Kills – affectionately referred to as INK. In previous years, Rock and Shock served up a healthy dose of horror and music for fans to take in. However, it failed to survive the changing times leaving a crater where long term New England horror fans would smolder until Silver Scream filled the hole. Music is a big part of Silver Scream. Along with INK, long time horror fans will recognize Twiztid, the horrorcore rap band that rose with Insane Clown Posse. Rounding out the musical talent is Ari Lehman’s band The First Jason – fronted by Lehman who was the first actor to play Jason Vorhees in Friday the 13th. These bands play a concert Saturday night.

One of the best aspects of the modern convention scene is that you can meet and greet your favorite celebrities. Silver Scream delivers on this front. Among the famous faces you can encounter is Kane Hodder, the man behind the mask of Jason Vorhees for four of the Friday the 13th films as well as numerous other horror movies. Also seen is Bill Mosley who first wowed horror fans as Chop Top in the Texas Chainsaw Massacre franchise and later as Otis in Rob Zombies trilogy of terror. Nick Castle who played Michael Myers in the slasher classic Halloween and Doug Bradley who was the terrifying Pinhead in Hellraiser were also in attendance. Scream Queens Danielle Harris of the Halloween franchise and Felissa Rose of Sleepaway Camp round out the well know folks at the con. Plus many more were there for pictures and autographs.

Shopping is a must at modern cons. Silver Scream has a decent marketplace of various vendors peddling their spooky and scary wares. You can buy the latest horror comics as well as props from movies. Art is abounding everywhere. Horror posters, custom prints and serial killer portraits are among the many macabre items one can take home to adorn your own personal haunted house. Speaking of which, a few haunted attractions also had booths advertising their upcoming season just in time for you to plan your October weekends. From toys to T-shirts, Jewelry to videos the vendors of this con have a little bit of everything for the collector among you.

Cosplaying, or the art of dressing up in a costume to fit the convention’s theme has become an industry unto itself. And horror cons have become a battleground that showcases many talented folks creating an atmosphere where you never know who will be standing next to you. Stranger Things has taken over as we now see Eddie Munson complete with his Hellfire T-shirt and rocking out to Master of Puppets. Plus a witch complete with a traveling cauldron accompanied a stilt walking Jack Skeleton. You might catch Batman and the Predator as they stalked the halls. A very realistic Frankenstein resurrected the Boris Karloff icon as he posed for photos around a menagerie of Universal Studios monsters. Finally, these fans can win trophies in a cosplay contest judged by well known cosplay group Diffusional Cosplay. 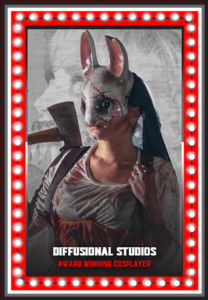 Conventions at their heart (no pun intended) are educational. Doctors attend medical conventions so it’s no wonder those with and even greater taste for blood would want some solid class time to get the latest information and in-depth stories from the world of horror. Silver Scream delivers this in the form of panels. If you are a Friday the 13th fan, then you can listen to Ari Lehman the first Jason with Kane Hodder the most prolific Jason talk about their experiences. Twiztid reflects on their quarter century of performances if you want to delve into the musical side of the scary. And for the ladies, there is a panel for the Heroines of Horror. All this plus many more.

The Silver Scream Convention is a small but highly concentrated horror conventions. Though not super in size, what it lacks in quantity it makes up for in quality. The vendors are top notch. The celebrities garner long lines for meet and greets. With this being the conventions first year, we can expect it to grow if it survives and thrives in the post pandemic world. If the quality remains high yet it expands, we could have a horror con to rival the ages.

Silver Scream is located at the Double Tree in Danvers making it less than hour from Boston by car. Being so close to a population center is crucial to bring in crowds so this is a big plus for this convention. But even more alluring is its proximity to Salem which has become the spooky capital of the world. No place on Earth does Halloween as well as the Witch City (well maybe Dia De Los Muertos in Mexico). The potential to have crossover tourism is massive. Head to Silver Scream to meet your favorite horror stars then go to Salem to meet real witches and take in a haunted attraction.
Silver Scream is a small but high-quality horror convention scheduled at the perfect time to kick off the Halloween season. Put away your beach towel and pull out your scary masks as you sip your pumpkin spice latte. Use this convention to usher in the spooky season!