Swim with Sharks through Snappa Fishing and Diving Charters (4.5 stars) 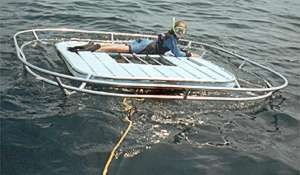 Two sharks swim by me and I’m not even on the protective metal raft yet.

Unless you’re an astronaut or mountain climber, going on a tour with Snappa Charters is the closest you’ll ever get to visiting Mars. The ocean is an alien landscape, with waves in every direction as far as you can see. Humans are not built to survive in the open sea, and even though you’re on a modern boat with a radio and GPS, you get a sense of possibility, like anything might happen. It feels primal, as though you’re boating 500 years ago. You get the thrill of adventure despite monotonous views of the shore, and then the shoreline is gone, with just the water remaining, all around you out to the horizon.

You are alone, and there are sharks so close you could touch them. This out-of-the-world experience is the Shark Cage Diving at Snappa Charters, based out of Narragansett, Rhode Island, the southern tip of the state not far from Newport. With Snappa, up to 21 people can go whale watching, view the offshore wind farm of Block Island, take a sunset cruise, or view tall ships or lighthouses. You can go sport fishing, or dive in the water with sharks. Snappa Charters even has a service to scatter your ashes at sea. Although the movie Jaws was filmed on Cape Cod, and great white sharks do exist around Cape Cod and visit southern Rhode Island, too, the most common sharks you’ll see with Snappa Charters are blue sharks, mako sharks, and basking sharks. Sometimes they’ll see hammerhead sharks, too. As one of the guides told us, they’re like wild dogs. While they are dangerous, as long as you don’t provoke them, they should leave you alone. Shark diving incidents are vanishingly rare, which is perhaps why we weren’t warned from swimming in the open water when there wasn’t enough room on the raft to hold all of us.

Snappa Charters features a 46-foot boat, run by Captain Charlie and two mates. On our day, they had 10 passengers. There’s an indoor cabin that’s fully protected from the elements, featuring seating, a lunch table with cupholders, and a variety of fishing rods hung along the ceiling. But you’ll want to spend most of your time sitting on the deck, because when you’re in the enclosed cabin, despite its windows it feels like the whole world is rocking. That leads to seasickness. Out on the deck, your body is more likely to understand that you’re the one rocking while the world is stable. Pro tip: keep your eyes on the horizon because it’s the only thing that’s not moving.

You meet at 6am, ride out perhaps an hour from shore, in our case to a place that was 12 miles northeast of Block Island, close enough that we could see the windmills off the shore. Don’t expect to retain cell phone service. Seagulls, the occasional flea, and even a butterfly made their way out the boat even though we could see no land. Then the crew dumped chum overboard as the boat moved, leaving a trail of it in the water. Chum is fish oil and fish bits, which sharks find delicious. Any shark that crosses the two-mile trail should follow the trail right up to the boat for guests to see. Then the crew heaved overboard a giant cage with flotation devices attached, and a 8’x8′ metal raft, the “Playpen”, with more floatation material. Although some passengers came geared up for serious SCUBA diving, which is necessary to get inside the cage, most of us just paddled around in the open water or sat on the raft, using snorkeling gear to peer underwater, which is far easier and recommended by Snappa. (And I think we got the same views since the sharks stayed close to the surface.) The crew provides wet suits and snorkeling gear for a small fee.

Taking Dramamine is an absolute must to reduce seasickness. When the boat is moving its forward momentum reduces rocking, but when the boat stops, it rocks. Even though we had a calm day, the small charter boat had little inertia and did rock heavily in the waves. It’s not like being on a rhythmic swing or a soothing rocking chair, because waves and subwaves come from all directions. You can’t predict or sway into the next rocking of the boat.

If you do become nauseous, there’s no pause button for you to catch your breath. There’s no respite or let up from the waves, and the tour is 10 hours. The raft, being its own little ‘boat’ also rocks. About the only thing you can do is to vomit a little — feels great, and it wasn’t just me. Or you can brave the sharks and float in the water, where, because your body and waves move as one unit, it feels smoother.

Also, remember to reapply sunblock after you emerge from the water. You can get shade in the cabin, but as previously explained, you’ll want to spend your time on the deck. We saw more than a dozen sharks, of which 7 were untagged and got tagged by Captain Charlie and his crew. They hook a waterproof vial and paper report onto the shark, so that others who find it someday can report back its migration patterns. Everyone on board will get an email if one of “our” sharks gets seen in the future, Charlie promised. We saw blue sharks ranging from 6 to 8 feet, which range all over the North Atlantic Ocean, even as far as to Europe and Africa. The best time to go shark diving is June to September. In September even larger sharks, up to 12 feet, swim through New England.

I have mixed feelings about going shark diving. On the positive side, it’s a bucket list item that I never knew I had until I heard about it. A chance to go swimming with sharks! We saw plenty of sharks! You really could have touched the sharks, which bumped some of us. Their fins were easy to see cruising just above the waterline, and with our snorkel gear we got great views and good photos. You can sit on the cage or raft, or lie flat on it, sticking your face into the water.

However, I’ve reviewed several boat tours, so I know a bit about tourist norms. The Snappa cruise was a basic, no frills experience. We signed no safety waivers, they didn’t make us wear life jackets, and beyond a simple introduction, we didn’t get extensive explanations about the sharks or equipment. Crew did not get into the water to help guests with their gear, and the guests weren’t encouraged to introduce themselves to each other. The crew didn’t shoot photos or video for us, something everyone would have loved and that they could have charged for. (On my own, I ended up not quite getting perfect shots.) They didn’t provide lunch or beverages, which would have been so easy for them to do. (I must have missed the email explaining to bring our own food?) When boarding, the crew did not do a check with us to make sure we had our own sunblock, food, and Dramamine, and were strong swimmers. The raft needed several times more floatation material, to keep it from turning into a seesaw when guests sat on it funny. I spent most of my raft time struggling with nausea, slipping and grabbing for handholds on the raft as it heaved, and trying to keep my mask on, but taking it off when I needed to breath more heavily. However, I saw that most of the other guests were having a great time. Perhaps this tour is best for people of athletic ability who are very comfortable in the water, have snorkeled before, and are smart enough to take their Dramamine.

Perhaps more importantly, other professional tours — even all-day snorkeling tours — tend to last 6 hours. The Snappa shark diving tour was 10 hours. We saw that 5.5 hours was enough for every guest to go into the water and come back out. Eight hours was enough for everyone to shrug and say, I guess we might as well go back in. Ten hours was enough for just two people to dip in for a third time. That seemed unnecessary to the rest of us, especially those fighting seasickness, sunburned, hungry, or just tired.

Although Snappa Charters lacked basic amenities and personalized attention, and ran too long, shark cage diving was a uniquely memorable and amazing experience that I’ll be talking about for the rest of my life. Snappa Charters is one of only a very few tour companies with shark cage diving services in New England (there are just two, I think), and I believe Snappa is only one that has a raft where you can snorkel, instead of requiring scuba to go into a cage. I’m eager to try shark diving again, and I despite my complaints the experience was so good that I’ll give Snappa Charters Shark Cage Diving 4.5 stars.

See snappacharters.com, and here’s some video from our experience.