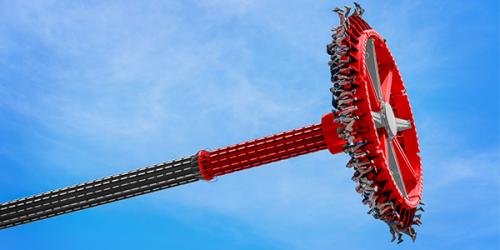 Superheroes are everywhere these days.  Every month a new blockbuster movie hit’s the Hollywood theaters, breaking records at the box office like Superman smashing through a brick wall.  It is no wonder then that Superheroes are now more popular then ever.  It is with that spirit that Six Flags New England has forged a theme park with numerous Superhero themed attractions.

Upon entering Six Flags New England you might be lucky enough to be greeted by The Flash complete in his blazing red super suit, looking like he ran at lighting speed right out of your television screen from his hit TV show.  A few steps further and you might see Wonder Woman posing with kids as if she just finished a major appearance in her last movie.

But today the super hero came out to see the newest attraction – Harley Quinn Spinsanity!  Not only did the Superheroes show up, but so did the super villains!  The Clown Prince of Crime, The Joker came out to pose in front of his crazy 4D coaster.  Meanwhile the Riddler joined him in the shadow of his mind erasing roller coaster The Riddlers Revenge.  The super villains couldn’t cause chaos without Batman himself joining to keep things square.  So out cam the Dark Knight representing his coaster as well.  These and other rides comprise the Gotham City section of Six Flags New England.

However the day belongs not to these storied characters, but to Harley Quinn, the one time lady friend of the Joker.  Now on her own as a super villain in her own right, Harley gets the attention she deserves with her own ride – Spinsanity.  Harley Quinn herself joined the fan fare entering the area with a cartwheel proving she can spin herself.

So what is Spinsanity?  It’s a five story spinning ride that rocks you back in forth like a giant croquet mallet.  40 passengers can ride at once as it swings from side to side, getting higher and higher as it goes.  In what appears like a close call, it comes super close to the nearby Joker coaster, though there is a safe margin of error I assure you.  It is part of the thrill to watch as it seems like two rides might collide even if they never do.  At first it seems like the passengers are on it forever, far too long, but once it’s you in the seat, it seems to go by way too fast since you are having so much fun.

A few facts about the ride.  It is one of the tallest and fastest rides at Six Flags New England.  It hits speeds of 70 miles per hour as it plunges nearly 15 stories!  As the guests fly higher, they experience zero gravity as they hit nearly 147 feet up!  The Harley Quinn ride was intentionally placed adjacent to the Joker coaster so that when they nearly touch, we see a glimpse of their chaotic relationship played out in these rides.

Located near Springfield in Agawam Massachusetts. Six Flag New England offers up the best amusement experience in New England by far.  It has more thrill rides for big kids and plenty to do for the little ones.  It can boast some of the best coasters in the world like The Superman: Man of Steel Ride, The Cyclone Roller Coaster and the classic Thunderbolt.  So come and enjoy the summer as Six Flags is now open everyday until Labor Day and weekends in the fall.