Shin Lim: Limitless Has Stunning, World Champion Illusions But Not Integrated Into a Perfect Show (4 stars) 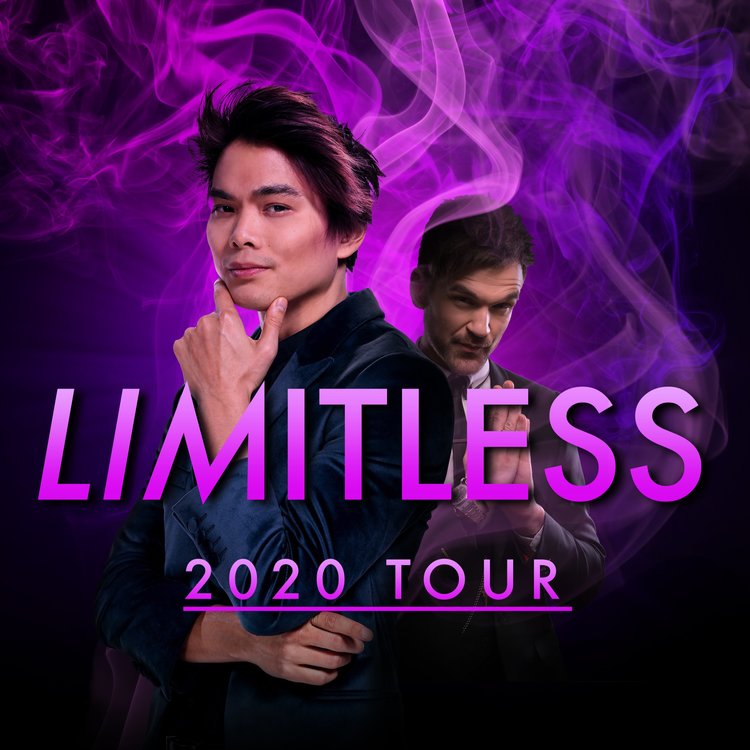 Shin Lim is a magician from Boston who performed this month at the Chevalier Theatre as part of a North American Tour called “Limitless”, a play on his last name, Lim. Lim kindly agreed to an interview a few weeks before the show, where we learned that he has family and many fond memories of Boston. He won the 2015 World FISM Championship for close up card magic, was the winner of America’s Got Talent season 13, and also won America’s Got Talent: The Champions. His performance was 2 hours and 10 minutes including an intermission, and you could buy a “meet and greet” ticket to personally speak with him after the show.

We very much enjoyed the show, which was full of crowd interactivity and technically astounding illusions. We were surprised to learn though that Lim tours with (and has performed for a decade with) Scottish mentalist Colin Cloud, who has appeared on America’s Got Talent and Britain’s Got Talent. Strangely, Cloud’s name is not in the event description for the tour, or anywhere on Lim’s website except that he’s standing behind Lim in one photo.

In one sense, the pair balanced each other like Penn and Teller. Like Penn Jillette, Cloud had more a powerful stage persona. Cloud got most of the laughs and thrilled the audience with his gift of gab. He would, for example, throw a doll into the audience and joke around with people who caught it and could become volunteers to come up on stage. Like Teller, Lim instead was silent through much of his act, and when he did speak to the audience, he was not as polished. Delightfully, he played two excerpts on piano, and we would have enjoyed hearing entire pieces, or seeing him perform a trick while simultaneously playing.

Also like Teller, Lim displayed more technical skill than his counterpart. Generally, card tricks (Lim) are more about dexterity, whereas mentalism (Cloud) is more about build-ups and talking.

Lim’s routines were the main feature of the evening. They were so intense! Even at a distance, you can see why he won a world championship. If you are fan, you will see him perform his hits. He makes cards appear, change, and uses smoke and sleight of hand. It’s truly astounding. Watching him work even at a distance is mesmerizing, and a cameraman on stage caught the action, which was projected on screens above the stage. Thus, you could see him “up close” as well. Because Lim often performs silently, sometimes it was confusing to know what to expect. His routines happen quickly, and if you can’t quite see properly, and don’t know what’s supposed to happen, then you can’t get shocked and surprised when it either magically does or doesn’t happen. Delightfully, one of his routines involved a special effect that reached out into the entire audience.

Lim performed only four routines, I believe, each one with numerous illusions. So you’re getting a “wow” every 30 seconds, but his act didn’t add up to much stage time. Normally, in a show of any type (dance, magic, concert), you have a few fantastic acts and then several mid-level acts. Lim definitely brought the fantastic acts, but didn’t pad them out with a series of mid-level illusions to lengthen his presence on stage. That was disappointing, because Lim was the headliner we came to see, but Cloud actually spent more time on stage. Maybe it’s time to add his name to the show’s title and description.

That being said, Cloud was also a crowd pleaser in a different way, through his gift of gab. Cloud brought out volunteers from the audience and correctly guessed their age and names. Thankfully, Cloud did not take on the “magician as god”, admitting to the audience that he wasn’t really reading minds, though he did suggest that he was using a kind of psychology, which is not how mentalism works behind the scenes. Cloud’s crowd work was creative and clever. (Try saying that out loud five times quickly.)

As is true with all mentalism, Cloud’s performance had a lot of buildup for each trick, a “wow” only every 5-10 minutes. We didn’t know how the mentalism tricks were done, but we knew it was some sort of gimmick. Having nothing to do with Cloud personally, mentalism just doesn’t deliver the rapid speed or technical prowess of other types of magic. Unlike Penn and Teller, Cloud and Lim did not perform anything together, which was surprising, if I heard right that they’ve been working together for more than a decade. Each member of the audience got a few cards before the show in preparation for one of the tricks. In this effect, the audience was led through a procedure that was supposed to culminate with magic happening in their own hands. Unfortunately, the instructions weren’t crystal clear, and I don’t know that teaching the audience a math trick, though crowd pleasing, counts as a magic performance. Another trick with an iPhone was based on something a teenager could learn in 30 seconds, and if it’s not going to be clever, it should have been visually showy, which calculating a number just isn’t.

Unfortunately, there were substantial problems with the lighting and filming of the show. I’m making an assumption that, to save money, Lim and Cloud do not travel with lighting crew and camera operators. Instead they hire local talent. If Lim and Cloud are too tired from traveling for a lighting check, they should hire a stand-in to do it. When Cloud or Lim stepped into the audience, a spotlight did not follow them. Sometimes the cameraman stepped in front of Lim’s cardtable, physically blocking the audience’s view of Lim. At times, the camera did not seem to know where to aim the camera. As a fan of magic, I try to keep an eagle eye on a magician’s hands, or an eagle eye on a resting deck of cards, but this was impossible as the camera’s field of view changed. The hands and cards weren’t always in the shot.

As you know, a computer screen is a grid of tiny LED lights, whereas a projection being cast onto a screen works by reflected light. So if you send a video signal of a certain brightness X to both a computer monitor and a projector, the monitor will look as bright as X but the projector screen will look maybe half X as bright. In the show, the computer monitors were fine, but being set so far above the stage, I kept trying to look at the projected video instead, but it was so dim that I could not watch the trick clearly there. So I ignored the projector screen and kept flicking my eyes up and down from Shin Lim on stage to the monitors overhead. Sometimes, I couldn’t tell if there had been a spectacular magic reveal or whether I had just missed something ordinary, as my attention went back and forth between these two views. (Here’s a hypothetical example. Did the deck of cards magically flip itself over, or did Lim simply flip over the deck in full view of the audience but while I was flicking my gaze in-between views?) What I’m trying to convey is that these technical issues with video weren’t just window dressing; they directly affected the audience’s surprise and enjoyment. There is bottled lighting in Shin Lim’s card tricks. It really is perfection, and especially with Lim’s coming from Boston and his being so generous to grant an interview, I wanted so much to give the show a perfect 5 stars. Unfortunately, with the headliner not spending enough time on stage, the two magicians performing separately instead of jelling, a couple of uninteresting “mathematics” tricks, not enough stage persona from Lim, and serious lighting and video issues, I’ll give Shin Lim: Limitless a solid but not perfect 4 stars.

I hate it, but at a price point of $60-$120 and a nationally touring show, we can reasonably expect more attention to these issues. In his interview with Events INSIDER, Lim told us that he’s working to more effectively connect his intimate close-up magic with an entire audience, and on developing new illusions that take up the whole stage. I’m sure that will be successful and very much expect 5 stars on his next tour through Boston.