Can a story save your life? In 1,001 Arabian Nights, the king’s new bride hopes to forestall her own execution, by spinning a tale so good that the king must hear more and will spare her life. How can a stage show rise to the challenge of having that kind of impact? In our age of science, how can a theatre company thrill us with the magic of a distant place and far past? Just when I thought I’d seen everything, the Double Edge Theatre provides a startling demonstration of how theatre should be.

The show begins at night, outside on the grounds of a farm. In the parking lot you get a powerful smell of hay (and cows) before you’re seated in an open tent, with bleachers for an intimate audience of 80. One-upping Hamlet, Shahrazad tells two plays within the play, the first of a prince and a magic horse, and the second of a king who falls in love with a mermaid. Ultimately, Shahrazad hopes not just to save her own life but to inspire the king to be a better person.

Staging is the centerpiece of the production, and the tale takes place in seven locations — that’s right, seven! — with ever growing surprises. The audience is led to walk between each stage, of which only one is indoors, and be immersed in the scene, in the style of The Donkey Show and Sleep No More. The audience physically moving to new locations mirrors the hero’s journey through strange lands, while giving us short breaks (the show has no intermission). The sets focus on enhancing the actors, not simply framing them. Characters fly, climb through windows, swim in a real stream on the farm, dance with fire, and perform a shadow play. All of this is woven with Arabian music and dance. And I’m not even telling you the big surprises. Let’s just say that a parachute is involved. 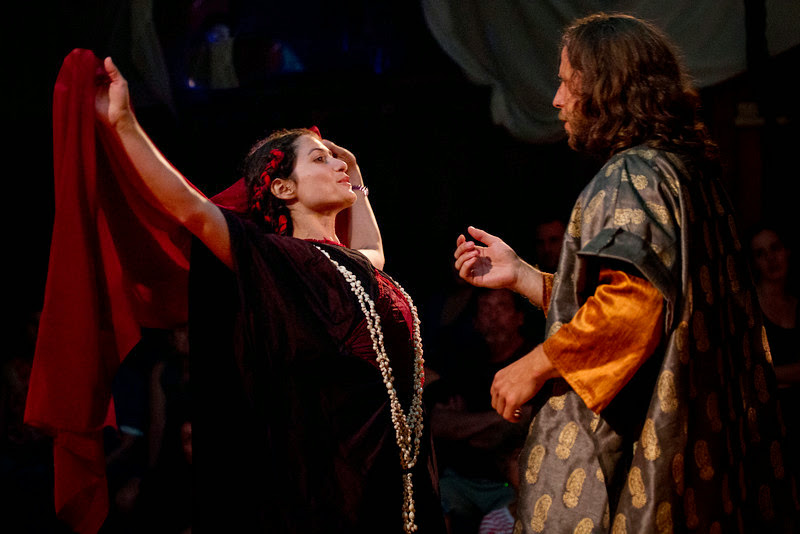 It’s remarkable to find a production that takes so many creative risks, but three elements push the show even higher. First, the story and staging are original: the show is not a copy from elsewhere. Second, the location of the show in rural Ashfield, Massachusetts, just north of Northampton, signals that more elbow grease than financing went into the production. To get this level of staging through sheer determination shows what a labor of love this was for the cast, many of whom actually live on and work at the farm. Third, the staging and antics aren’t just eye candy. Broadway shows are full of stunts that don’t move the story foward, such as puppets having sex in Avenue Q and fake snow coming down at the end of White Christmas. In Shahrazad, there appear to be no stunts. Every piece of choreography and staging drives the story forward and creates the sense of wonder that is far more important than plot points. In one scene, a mermaid swims from above as a mesmerizing counterpoint while the king and queen go through a montage of bedroom scenes, signified by sheets dancing around them, first becoming waves, then revealing maidens, and then showing love. The quick changes between the dream state, the main story, and the two substories are seamless and never confuse the audience. My first reaction was that perhaps the story’s character development was not as clear as it could be, but I was mistaken. It’s simply that the story has many layers and will make you think. That being said, it’s accessible to and encouraged for children. Each show ends with a party with free drinks where you can mingle with cast.

Because the staging (by Stacy Klein and Adam Bright) and story (by Brian Farley) set such a high standard, and with what were surely budget limitations, it would be mean spirited to comment that the lighting (by John Peitso) and costuming (by Tadea Klein and Amanda Miller) were at the level that you would expect from regional theatre. So instead I’ll say that the choreography (by Emma Jaster with Milena Dabova) and music (by Brian Farley and John Peitso) create a dreamlike state where the audience experiences the stories told by Shahrazad from the viewpoint of the king who previously had never left his castle to explore the wider world. Doing the show without ampliciation helped to ground it, and there was never a moment where a line got lost. Kudos especially to the father, played by Carlos Uriona who set two simultaneous tones for the story: epically over the top and yet not taking itself too seriously. There may have been a touch of playing the ending too soon, with too little fear in Shahrazad (Jeremy Louise Eaton) and too much wonder in The King (Matthew Glassman), but their chemistry together and the seductively musical notes of Shahrazad’s storytelling completely sold the (unlikely, when you think about it) premise that an epic story might win over the king’s heart. Layered is an apt description for the scenery as well. Because the show is set outdoors, there is plenty of room to create foreground action, background action, and then further back, even more background action. This circus of energy, this whirlwind of dervishes, aims to show the king that he’s not the center of the world. But will he get the message in time? 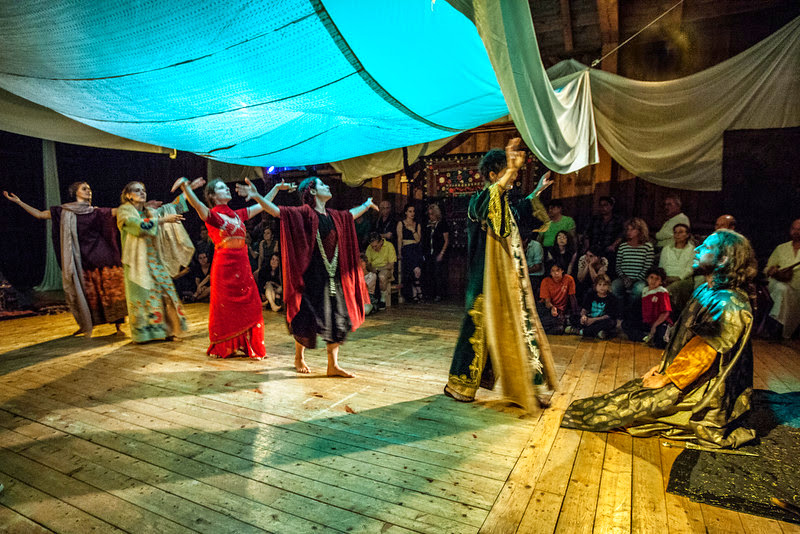 Theatre reviews are full of sloppy phrases like “must see”, but you really must see Shahrazad. It’s without question the most powerful low budget show I’ve ever seen, and out-impacts many Broadway shows I’ve attended. The Double Edge Theatre deserves national attention and funding, so tell your friends. This week’s shows may be sold out, but rush to join the Double Edge Theatre website, because they tell me that Shahrazad, even more polished, will make a return next year. I will see you there.