Segway Tours of Puerto Rico is Unique and Educational (5 stars) 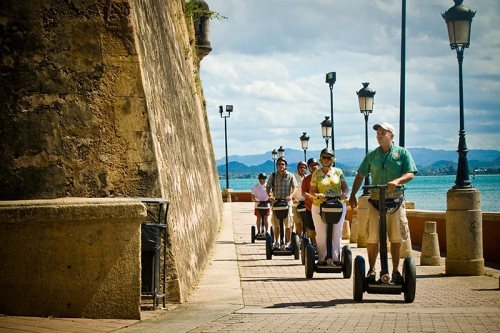 On a bus tour, you visit many places quickly and without effort, but you’re stuck in a vehicle, removed from your environment. A walking tour allows you to feel a city viscerally, but can be exhausting, especially in the heat. Segway Tours of Puerto Rico gives you the best of both worlds. You travel everywhere but can feel it also.

Their office is immediately next to where cruise ships dock. Host Jose Alvarez explained the safety rules and put us at ease learning to use the Segways, which are tricky at first, but you get used to them. It’s safe for kids and older folk, but you must be able to climb stairs, and the Segway has a strict weight range of 100-260 pounds. The safety briefing and training took a surprising 45 minutes, but it was pleasant. It’s a bucket list item just to try a Segway.

Then the tour itself was another 1 hour 45 minutes. The Segways performed remarkably well, as we rode them over cobblestones, up and down ramps, into and out of traffic on the street, onto the sidewalks, and even on grass. They keep you upright and feeling stable. Worst case, you can just step off. The pedestrians we passed seemed a mix of astonished and envious to see us, so I developed a habit of waving to them or offering a high-five, so as to include them in the experience. If you ever see someone pass by on a Segway who ignores you, they’re not being rude — they’re just concentrating on not falling off and keeping both hands on the steering bar! Traveling quickly, Jose was able to take us to many high points in Old San Juan. We wore earpieces so Jose could speak to us remotely, using a microphone. This was important, so that Jose didn’t have to shout to explain the city and its history, which would have been impossible in our long line of single-file Segways. But there were times that we could not understand him because of the low quality (and single ear) of the system. Better enunciation would help. Also, driving the Segways through the streets was distracting in much the same way that driving a car can be distracting. At times we weren’t able to fully pay attention.

While Jose’s stories weren’t woven into a single theme like Hello Tour Guide (formerly Legends of Old Puerto Rico), and we felt at times a bit lost for the big picture context, his explanation of the city was much more grounded and easily understood. He kept it simple and was patient with us, giving us time to ask questions. It was wonderfully interesting and fun, with humor and good insights. He didn’t get annoyed when we had an off-moment with the Segways or got lost in the conversation. Bring water and sunblock, because many of the locations that Jose chose to stop in are in direct sunlight. (Shade please!) Often we were allowed to dismount and walk around on our own. Segway Tours of Puerto Rico was not the perfect education, but we learned a lot, it was easy to do, and the Segways were a joy. We got to rev them full throttle a few times. Woo hoo! I’m glad to give it 5 stars, but to get the most from the history of Old San Juan, take a second tour with another operator, or explore the city on your own. For example, the big finish of the tour was to briefly visit El Morro, an old fort, which we visited a second time on foot for a full exploration that was very much worthwhile.