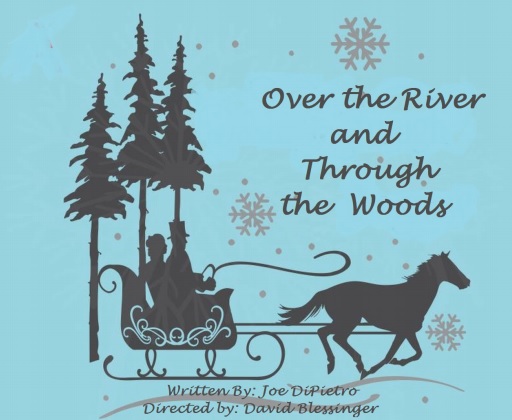 Nick is well-loved by his four nutty Italian grandparents, possibly too loved, because when a promotion tempts him to leave town, they scheme to keep him in their embrace! This comedy-drama, an early work by eventually Tony-winning author Joe DiPietro, was written in 1998 and is set in 1990s in the part of New Jersey that is basically New York City. It wisely avoids the complication of Nick’s parents, who do not appear in the play.

Despite the title, from the kids’ song, the play is not about children or Thanksgiving. It’s also not a coming of age story, since Nick is a full-grown adult when he receives his tempting promotion. But the play deals with similar themes of wanting independence, but wanting to stay close to family, too. The play runs less than two hours with one intermission, in the basement of a masonic lodge, and with the best refreshments I’ve ever seen at a theatre show: all manner of cookies, brownies, cupcakes, and popcorn.

Over The River and Through the Woods was laugh-out-loud funny, many times. That’s a challenge with a small audience, and in the Boston area, which is said by comedians to be a tough region, perhaps because of our Yankee stoicism, and because we’re smart enough not to be as surprised by a joke we can see coming. The cast is solid. The best actors will make you laugh not just at the lines in the script but bring extra laughs with their physical and verbal performance. At one point, the cast just exchanged confused looks, and that got a big laugh. The script is filled with lines such as one character interrupting, “Oh, but I got a new crumb cake!” that are only funny in how they are performed, and the cast rose to that challenge.

Costuming delightfully included track suits for the elderly. The stage decor was convincingly a family home with a sofa and dinner table. Attleboro Community Theatre again showed creativity and sense of space in its props, which included for example coats hung on hooks in one corner of the set. That being said, the elderly tend to get stuck with the fashion and decor of their youth, and the costuming and staging evoked more its correct period of the 1990s than a stuck mindset from the 1950s. The play had perhaps too much sitting rather than dynamic blocking. A comedy must have energy, but the 50-something actors portraying 80-something grandparents might have included some moments of frailty, especially as nearing death is a theme of the play.

Alyce Fitzgerald (Emma) and Alex Aponte (Nunzio) especially shone in this performance. With her grey wig of grandma curls, Fitzgerald played up the New York accent and hand gestures to uproarious laughter. Aponte showed a wide range, both thoughtful in dramatic scenes and making throwaway lines, such as “We’re old; we’re adorable,” a laugh line.

The cast also rose above the challenge of having 5 or more people on stage at the same time, without confusion, with good reactions, and without missing a beat as the dialogue moved from person to person. (Except for one moment — when a scene creates a foreground / background distinction, with one actor being an extreme focus, those in the background should be still and not distract.) Notably, Bob Messier (Frank) turned out what I originally thought was a too low energy performance, but which turned out to be a character choice, to help create differences between the four grandparents, who play such similar roles in comedically antagonizing poor Nick.

At times, the script hits wrong notes. Anne Faiella (Aida), who could be Mike Bloomberg’s younger sister, wasn’t given much to do beyond a running gag that got old. Comedies often have stupid people but when the grandparents hadn’t heard of Seattle, that was off. However, mainly, the play goes beyond comic chaos to deeply thought-provoking themes. You know, with a play like this, you would expect the big reveal to be “well, sonny boy, we were immigrants who left our families, so now it’s okay that you leave your family, too”. It would have been a good point, but unoriginal. Well, Over The River and Through the Woods actually delivers a dozen nuanced and far more interesting, and genuinely charming, reflections on the nature of family.

For example, Matt Gousie (Nick) had a challenge in portraying the straight man, required to spend much of the play simply reacting to the hijinks of the grandparents, being authentic and not repetitive. Although I thought at first that he chafed in an unlikable way, rather than a no-harm-done comedic way, this turned out to be a choice, a theme of the show. What else can poor Nick do, when his grandparents ignore his stated needs, and loom over him with their parental, dominating behavior that showed a disrespect for his independence? When they don’t get or aren’t listening as he tries to set boundaries, how else can he get their attention but to raise his voice — even if that creates dissonance and hurt feelings? It’s something I think all of us having parents with a strong sense of self struggle with. Our only choices are to give up on intimacy (sticking to bland topics), or engage but with some friction (“I’m doing this because I want to, not because you told me to”).

Despite being ground down by them, Nick does love his family and is also uplifted. His decision whether to leave town for his promotion is not an easy one. When Nick doesn’t think his grandparents get his career path, they say, “Tell us anyway… Just because we don’t understand it doesn’t mean we don’t want to hear it.” At another time, they say he “expects too much”, explaining that when they were young, all they wanted was a stable income. Nick wants so much more. To me, the most striking line in the play — and again something a lot of families struggle with — is this. Good parents nurture their kids and yearn for them to go further. But Nick has gone so much further than his grandparents, in the modern definition of “success”, that he’s become alien to them, unrecognizable. He wants to show respect and genuine love, but also needs to make his own choices and not feel stuck. No wonder Nick and his grandparents have differing view on his possibly moving away.

The play continues to deliver insights. Nick is interested in his grandparents’ old stories, but one tells him, “I don’t want to talk about the past. people don’t change. People keep doing the same thing over and over.” It’s the closest the play gets to regret, with grandparents perhaps written too empathetically, with no hint of malice, “having a history”, or racial insensitivity. Also intriguingly, Nick has the best relationship with his grandparents when he visits them without any sense of obligation or ritual, an “in-between” time rather than a ceremonial Sunday dinner.

Unfortunately, two flaws in the script undercut its power. First, a number of the scenes on stage pause for an aside, with one of the actors lit in a spotlight and the others frozen. How shall I explain this: don’t do that. Don’t stop the momentum of the play. Don’t violate the “show, don’t tell” rule, talking about things that could be shown. For example, there’s a heartfelt moment between Nick and his grandfather Frank, who says “When you get to my age, the only thing that matters is family.” All the asides could have been shown in scenes like that instead.

Also, much of the exposition in the asides is unnecessary. There’s another rule in writing that goes, hold all exposition until the point in the story when you need it. In other words, if it doesn’t have emotional resonance in the current scene, it doesn’t need to be said at all. And if it does, put the exposition into the flow of the story. We didn’t need to be given the names and personalities of every character on stage up front… those become clear through the scenes, the dialogue and the acting. One aside is just something like, “And then I was in for another big shock!” You cut away just to say that? Narration is a crutch, and this play does not have expository chasms to bridge like the opening crawl of Star Wars that sets up a whole galaxy. Obviously, flaws in the script are no fault of the Attleboro Community Theatre, but just to say it out loud, it’s okay to adapt a script in a production. I know, some people think that playwrights must be respected by including every word, but a play, when it’s turned into a movie, gets adapted, both for the new medium and for whatever lessons were learned from the original production. A 1998 play turned into a 2020 play can be adapted, too.

There would be no way for a production to adapt a script to remove the second flaw in the script (except by not choosing it, but there were good reasons to choose this authentically funny, deep play). In the second half, after intermission, the tone of the play veers jarringly. Almost all the comedy leaves and the show became a dark drama. There’s a hopefulness and innocence in a light comedy (the play’s first half is not set up as a “dark” comedy) that must be vindicated by its plot. Wile E. Coyote can fall off of a cliff, but he’s unhurt. Shakespeare’s comedies have plenty of conflict, but everyone ends up married at the end. The script’s decision to begin as a light comedy but then move into a dark drama is such a poor choice that it makes me think that the author was yanked off of a clear narrative arc by a personal experience. (The show is fiction and not overtly set on any true story.) Towards the end, while I appreciated the deep and original reflections on family, the play became too earnest, even strident in tone.

While community theatre doesn’t bring a large budget or the deepest experience, there’s a “rooting for the home team” sense that you also get with improv comedy that excuses small flaws. But this production needs no excuse-making. While the script had some flaws, the production was solid, heightening both the humor and the dramatic ideas. Perhaps it’s time for Attleboro Community Theatre to remove the word “Community” from their name, and seeking greater funding and reach, as the Stoneham Theatre did in changing to Greater Boston Stage Company.

While giving respect to any theatre troupe that takes a creative risk, not just choosing commonly-seen or easy scripts to produce, a community theatre that is lacking in resources could be forgiven in the future for making more crowd-pleasing, less challenging show choices, and I hope they do. Exceedingly funny and thoughtful, but with a second half and ending that didn’t work as well, I’ll give Over The River and Through the Woods a solid 4 stars.