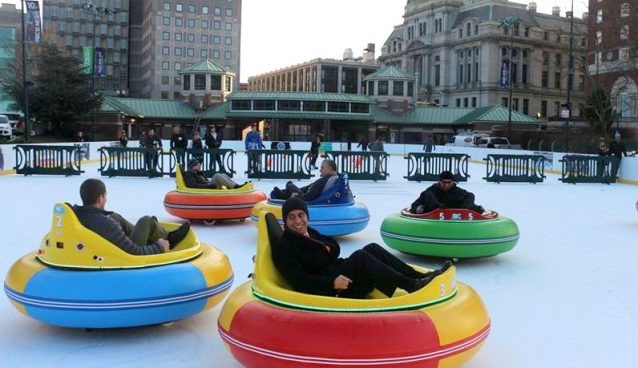 In downtown Providence, as well as ice-skating at the Alex and Ani City Center, you can also ride bumper cars! New England is full of ice-skating rinks but we had to check out the bumper car action, which are popular. Despite their extensive opening hours, daytime and nighttime 7 days a week, you’ll want to reserve in advance, as time slots often fill up. Getting to Providence is easy on the commuter rail and the rink is centrally located, right next to all the other nightlife in Providence.

The bumper cars take place in a sectioned-off area on the ice-skating rink. During some times you’ll have access to drive around the entire rink! But this seems unnecessary. You just don’t need that much space to bump around. The price is a wonderfully low $12 for 20 minutes. You would normally only get 5-8 minutes on a bumper car ride, and this does feel like quite a long time.

The “cars” are inflatable donuts. As a giant person, I found the space slightly too small for comfort, but would fit anyone else. Pro tip: cross your legs rather than bend them, to get your feet inside the car. Bumper cars are an amazing time for old and young alike. You bump around, you hoot and holler, make threats, receive bumps, take vengeance, and laugh.

The space has no ceiling, unlike most bumper cars which are open air but have a roof. So you get some great views. There’s nothing like being outdoors at night, even in the winter. Blessedly the controls are plastic, unlike metal controls which might get so bitterly cold that you couldn’t manipulate them without gloves. The cars have two wheels that are independently driven. The left lever controls the left wheel, forwards or backwards. The right lever controls the right wheel, forwards or backwards. This means that you can turn on a dime, and you can even go crazy spinning in a circle. When you do it right, the cars can go quite fast too! The top speed is perhaps 10mph or even 15mph, which feels like a lot when you’re so low to the ground. (Things rush at you faster the closer your eyeline is to the ground.)

I would love to give Bumper Cars at the Providence Rink a full 5 stars, even my rare 5 stars PLUS. Unfortunately, steering is impossible for a few reasons. First, there is a delay between pushing the levers and the wheels moving. Second, the wheels turn at different speeds, so you will tend to veer left or right. Third, sometimes the levers didn’t seem to work, and you need to try again, which could indicate a contact problem between the lever and the metal plate that it touches to activate the motor. Perhaps the poor traction of the ice played a 4th role in the poor steering. So as a result, we rarely could control where we were going. Also, the levers don’t seem to have a gradation. They are either full on or full off, a 5th issue. Many times the frustration of the lack of control ate into my enjoyment. I’m sure the bumper cars didn’t come this way, but continual use over a few years would affect some of these issues. Other issues seem like more of a design flaw in having separate motors on only two wheels.

Well, we did have a good time, even though it didn’t reach its epic potential. I’ll give Bumper Cars at the Providence Rink an excellent 4.5 stars. It is inexpensive and fun. They have real bathrooms and rent ice skates, giving you a second reason to go there. Try it! And while you’re there, check out the RISD Museum, the museum at the perhaps the world’s top art school (5 stars).