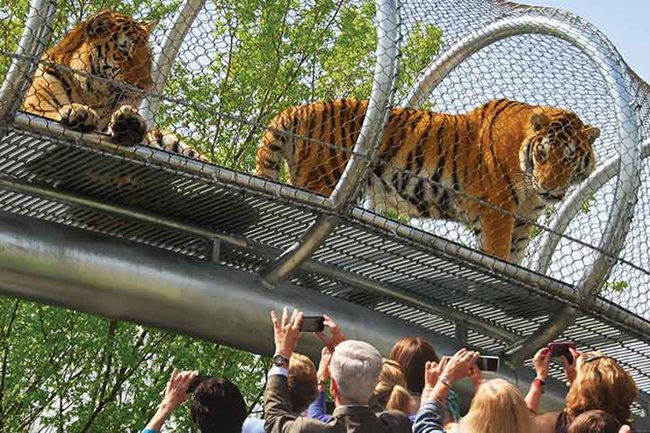 At the Philadelphia Zoo, you’ll spend a lot of time looking up. Every enclosure has both indoor and outdoor components, allowing the animals to have their choice of where they’d prefer to be. And you’ll find overhead trails, long tubes of wire mesh that snake through the entire zoo, so that apes, monkeys, tigers, and other big cats can leave their cages and move freely. So in a sense the animals have the run of the place! Of course they have separate trails, so that the tigers and apes don’t fight.

It’s a remarkable sight, even in the wintertime when I did not see overhead animals, and an example of why the Philadelphia Zoo says they’re the most creative zoo in America. It’s also the oldest zoo in America, opening in 1874. The zoo is host to a variety of endangered animals including orangutans, gorillas, spider monkeys, and a Chinese alligator. We also saw endangered fruit bats using the claws on their extended bat wing arms to climb up the metal mesh of their enclosure. I’ve never seen anything like it. They have a variety of interactive displays and animal demonstrations — for example I saw handlers teaching rats to navigate a maze. Animals are given “enrichment”, toys and experiences to make their stay less cagey and keep them mentally active. For example, handlers will hide their food so they have to hunt for it. This keeps their brains stimulated.

The zoo is extensive, with more than 1,300 animals, including what you would expect to see — giraffes, lions, a polar bear — but also what you don’t expect to see. They have a pig-nosed turtle, and a dwarf crocodile. You can pet goats and horses. And you can look a king cobra in the eyes — through glass, of course. The zoo is family friendly, with two nursing areas and plenty of places to stop and eat. You can even see red panda cubs. Volunteers give tours with great energy. It’s clear that the Philadelphia Zoo has a community that cherish bringing animals and people together.

I’m glad to give the Philadelphia Zoo a full 5 stars, and it was easily the best attraction I saw on my visit to Philly.