Passengers is the Circus Show With Stories about Journeys in Life (4.5 stars) 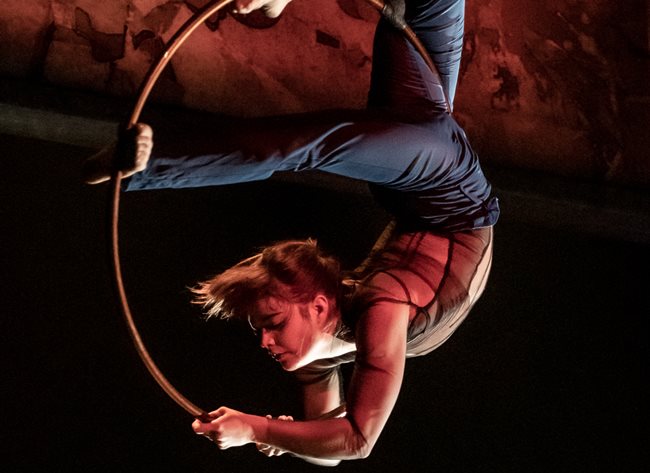 Passengers is the latest touring show of 7 Fingers, that other circus from Montreal. They’re unlike Cirque du Soleil, which goes big but can be inaccessible, larger than life instead of life, like an action movie where you don’t relate to the characters and can’t follow the story. Their circus performers come out, but then they leave the story permanently. And Americans don’t get dark mime humor. (It’s just so weird, the opposite of relatable.)

Instead, 7 Fingers uses their acrobatics and circus stunts as a way to tell stories. They maximize the humanity of their shows and let you connect with the performers as people.  The cast don’t come and go, but appear all throughout.

The performers, eight of them, even dress in everyday clothing in Passengers, perhaps so that we can see them as us, not circus gods. The show begins with the cast sitting in chairs as though on a train, and perhaps the rest of the show takes place in the imagination of those travelers, daydreaming or dreaming. Above the stage, a video projection shows scenery moving past with Americana themes, even tumbleweeds that set the cast acrobatically tumbling. From the hats and music that evokes Gershwin, the show is timeless but perhaps influenced by the 1930s, when trains and not planes were the big way to travel.

What follows is a series of vignettes, each related to travel or trains in some way. Sometimes the cast, in bare feet, perform all together, throwing each other, doing handstands, being playful and making it look effortless and made up on the spot. However, the show is beautifully choreographed, and when the cast synchronizes their actions you can tell how much talent and precision there is in their motions. Some of it is breathtakingly beautiful, such as a time lapse scene where one performer’s actions are mirrored in the rest of the cast with a quarter second delay, like an optical illusion. Sometimes they perform individually, and each cast member gets a chance to do a “solo” of whatever circus skill they are trained in. Most have multiple circus talents.

While not a comedy, the show is laugh-out-loud funny at times. A performer opens a suitcase to find it empty, and then clothing drops from high above. Using luggage carts, chairs, and eventually quite a bit of circus scaffolding to pack onto a tour bus, the cast leaps, climbs on each other, and sometimes perform melancholy songs of traveling through life. Freyja Wild is especially talented with hoops, and one can see why she is the first soloist. Conor Wild is breathtaking on the “Chinese pole”, which means climbing and doing acrobatics around a thick vertical pole, like a flagpole.

While we’ve seen aerial silk, hoops, and juggling before, the cast add their own tricks. I’ve never seen someone climb a flagpole while it’s being raised up from horizontal to vertical. I’ve never seen a hoops gal (are there hoops men?) get thrown around like a hoop while she is hooping! I’ve never seen an aerial silk performer descend while “standing up” all the way, balanced on silk strands slipping around her feet. Not all the people thrown around in the show are women, and not all the throwers men. There’s even a trapeze act without any trapeze, just two performers swinging from a height. At times, they turn off the stage lighting and use portable lights. The rhythms of breathing are part of the show. There’s tightrope walking.

It’s fascinating, mesmerizing, while at the same time wholesome, and uplifting. They don’t speak much but do you start to get to know the performers over the course of the show. The show is fast paced. Even during scene transitions when they are setting up equipment, someone performs to keep the flow going.

Four years later, the 7 Fingers show Cuisine and Confessions (5 stars PLUS) is still the best circus show I’ve ever seen, with its humanity and audience connection. Passengers does not quite rise to that level. Traveling on a train can be boring, but don’t put boredom and yawning into a show. Traveling on a train at light speed can make you think of Einstein, but has nothing to do with the human condition, and its scene wasn’t funny enough for its length. Some of the humor made us laugh out loud, but some didn’t. It took me a while to catch on that the scene with time stopping was comedy. (I think it’s a mime thing, not to introduce what is happening, but to make us figure it out. Feeling confused must play better in Canada and France.)

The sweet, sad music with violin and piano, while powerful and affecting, was too heavy. Using music too much in a film or show can indicate that you don’t belief in the performance to move people on its own merit.

The intention of Passengers is not to tell a story, but to give a flavor of human stories of traveling, but we don’t get much story in the show. Lines such as “I’m waiting to see where I settle” set a mood, but — in an analogy to poetry, not prose — don’t create an arc that gets us somewhere. What I’m saying is that the show was perhaps too abstract. You hear thoughts such as, “We are raised on stories, introductions and endings… but then there are stories that are never told, that just stop. No destination, no arrival, no resolution.” It sounds deep, but is it? And if our show is based on a train analogy… then all those journeys do have an arrival. We get glimpses of the personalities traveling but no more.

Passengers is moving both figuratively and emotionally. I’m glad to give Passengers by the 7 Fingers 4.5 stars.