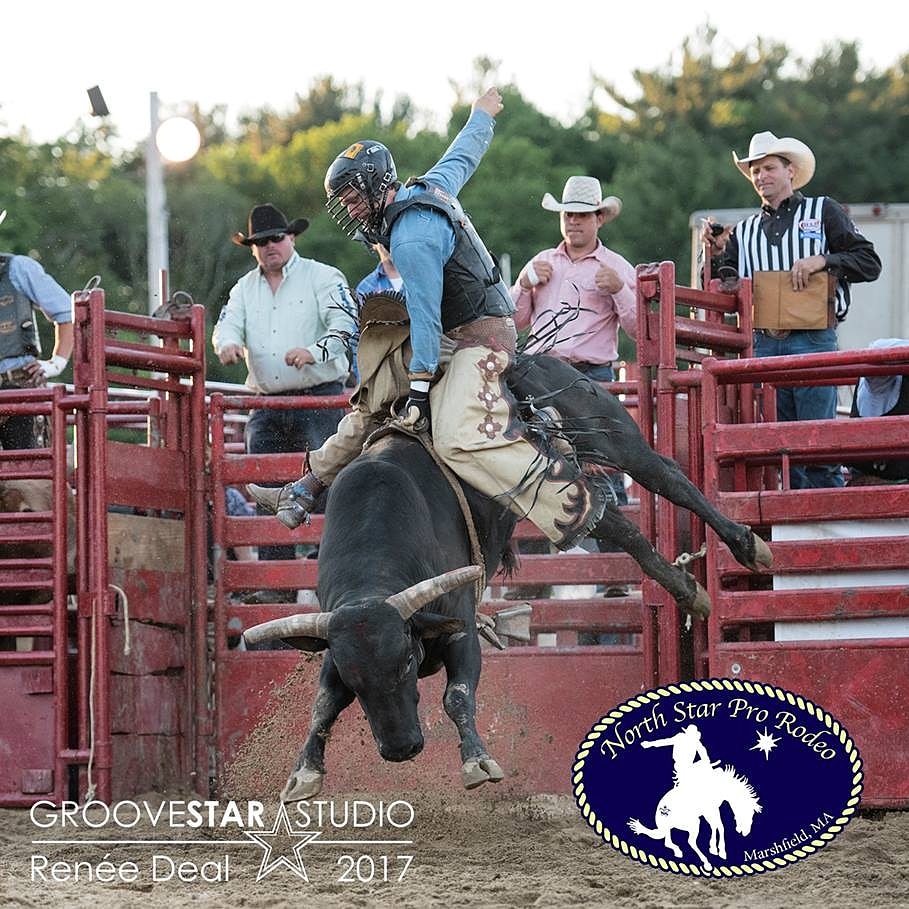 There are very few rodeos in New England that I’ve learned of in my extensive research. North Star Pro Rodeo is a great one! You’ll see rodeo clowns, a kids’ program, riders atop bucking broncos, stunt riders who do acrobats from horseback, lasso spinning, steer roping, and so much more. The event is competitive, not just a performance, drawing talent nationally. Someone told me that rodeos were first created in New England, though I don’t see that online.

The North Star Pro Rodeo takes place on the Marshfield Fairgrounds in Marshfield, Massachusetts, where you’ll find some 20 vendors selling cowboy hats and food. We were grateful to find a healthy option, although carnival food generally is not like that. You’ll find fried dough, pad thai, pizza, and of course a lot of beef: hamburgers, barbecue, and even a steak vendor promoting their meats.

The action takes place in a medium-sized dirt arena, with stadium seating, some of which is covered from the rain, which is good because the event is rain or shine. I often write about whether a festival is “accessible”, meaning, do they work hard to help outsiders connect to the culture and understand what’s happening? For example, a Greek Festival, held at a local church, is typically meant only for the local Greek community, and can be fun but won’t be very accessible to outsiders. Museums vary depending on whether they have interact exhibits and well-written placards.

As a lazy, urban, sushi-eating foreign car driver who uses words like jingoism, it’s easier for me to relate to the exotic, Canadian Cirque du Soleil than a sport competition that comes out of farm work. So I was pleasantly surprised to find the North Star Pro Rodeo mainly accessible. The announcer included women by saying “cowboys and cowgirls”. Smoking was banned in the common spaces or bleachers, which the audience respected, and the country music wasn’t religious — something that is more inclusive to people who are Jewish, Muslim, lapsed Christians, atheists, or just generally not very religious. (Perhaps it’s time to stop having the announcer hold a public prayer before the event, though.) A lot of people wore cowboy hats, seemingly not as a costume but as a working hat.

There were a lot of families with cute kids. They held a parade. New England has numerous agricultural fairs, but the North Star Pro Rodeo is so much more. Many of the stunts and competitions will make you gasp! I have no idea how they stay on top of the bucking broncos for so long, and I was worried for the safety of the cowboy and cowgirls, but they seem to handle that professionally, with the rodeo clowns guiding away the crazed horses after the rider inevitably fell off.

We saw so many beautiful horses. Although meeting the cowboys and cowgirls was not a specific part of the event, and keep in mind that as competitors, they are trying to get their head in the game, with a bit of moxie you could probably get permission to pet a horse and speak with someone. We were grateful to speak with Cooper Nastri, a 17-year-old trick roper who tours nationally, twirling the lasso with acrobatics. He said, “Back in 2011 at the First Frontier Circuit Finals, my dad was team roping and calf roping there. So we went there, and me and my mother were in the stands watching, and they had Austin Stewart, who came there and trick roped, and did a show with flames. He really impressed me with that, so I really wanted to learn it. So I just worked hard enough at it until I got it.”

We were in awe of the North Star Pro Rodeo, which was reasonably accessible. Though the venue and fairgrounds were small, it featured stunning feats! 4.5 stars.