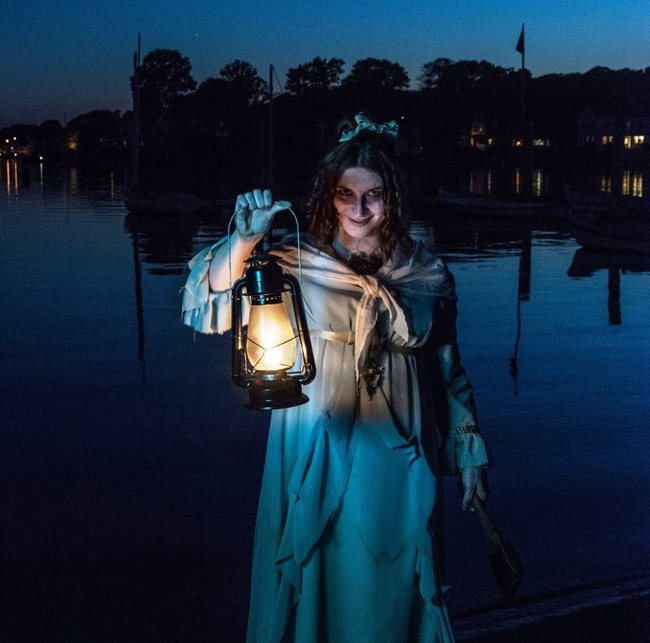 Mystic Seaport is one of New England’s re-enactment museums, like Plimoth Plantation and Old Sturbridge Village. It’s set next to the ocean in Mystic, Connecticut, where in the daytime you can see a 19th-century seafaring village re-enacted, including a general store, coopers, shipsmiths, and real old-time sailing ships, with demonstrations and performances. Every Halloween, their old-timey setting becomes the backdrop for a spooky interactive show, Nautical Nightmares. Nautical Nightmares is based on the works of H. P. Lovecraft, the New England author who comes in a line of American horror authors starting with Edgar Allan Poe, then Lovecraft, then Robert Bloch, who wrote the book behind the movie Psycho, and finally Stephen King. Stephen King called Lovecraft the “twentieth century’s greatest practitioner of the classic horror tale.”

Like Edgar Allan Poe, Lovecraft’s tales spook you psychologically, instead of with gimmicks or gore, having an important influence on horror stories today. Like many in the 1920s, Lovecraft was racist and anti-Semitic, so doesn’t deserve the stature of Poe, but his works have been modernized by or influenced many, including John Carpenter’s The Thing, and Stephen King’s IT. Lovecraft pioneered horror writing that draws upon ancient, well-known superstitions to help readers suspend disbelief, and created a Universe of characters known as the Cthulhu Mythos. I became a fan of Lovecraft before understanding his prejudices — just as I idolized Benjamin Franklin before I learned that he was a slaveholder, god damn it. I’ve read Lovecraft’s tales out loud at parties as ghost stories, seen film adaptations, and visited Lovecraft’s gravesite in Rhode Island for the annual ceremony of his fans. So I was excited to attend Mystic Seaport’s Nautical Nightmares. The performance, an indoor / outdoor interactive play, takes a little more than an hour.

You arrive first at the Visitor’s Center, which is modern. Even though Mystic Seaport is closed, it’s clear that a lot is happening there when it’s open. We wished that we’d arrived in the late afternoon to see it, taken a break for dinner, and returned for Nautical Nightmares after sunset. (The six o’clock show was not dark enough.)

The show begins with your being  greeted by a tour guide dressed in old-time clothing, who takes you walking to indoor and outdoor spaces on the 19th-century village grounds. You go into an old print shop, walk among old buildings, and even board a ship! (It’s the Charles W. Morgan, the last wooden whaling ship in the world, built and launched in New Bedford in 1841.) In each setting you spend 10 minutes with one or two actors, who tell you and show you the horrors of an ancient and mystical force that is drowning this old sea town in a cult of murder. It’s driving everyone mad. Acting was strong from all cast members, but Mrs. Ainsley stole the show. She’s given a difficult role to play, one that could easily seem cheesy and cause laughter. Instead she had us shrieking and unnerved with her sinister cackling. The setting could not have been better. They make even better use of space in Mystic Village than Sleepy Hollow, the Halloween show at Old Sturbridge Village, does there. Being in the old-time environment at night really cements you in the past! Costuming was excellent as well, all period pieces. There’s nothing like an outdoor theatre show at night, themed for Halloween with an innovative spookiness! If it’s not cloudy you’ll see stars in the sky. Even though this show wasn’t a high budget production, it deserves recognition for its creativity and impact. Characters fought each other, murder was in the air, and the show left us delighted. This is the Lovecraft show that I have wanted to see my entire adult life. The show is wonderfully interactive, with characters — especially the tour guide — engaging visitors directly. Guests do need to walk and stand during the show, but thankfully there are also places to sit. If the tour were pipelined, with Audience A going first to Setting 1, then 10 minutes’ later Audience B going to Setting 1 while Audience A proceeding to Setting 2, then Audience A going to Setting 3 with Audiences B and C following 10- and 20-minutes behind, etc., they could fit in more shows.

Unfortunately, some rough edges undercut the production. Stories for the performance are taken from several Lovecraft works, including The Shadow over Innsmouth, Nyarlathotep, Dagon, Dorian Grey, The Picture in the House, The King in Yellow, and The Hound. This made it too confusing for anyone unfamiliar with Lovecraft’s works. Even I, who caught the references, couldn’t follow the story’s loose ends. The performance should focus on a single plotline, The Shadow Over Innsmouth being perhaps the best fit since it incorporates an entire village into the narrative. Perhaps visitors waiting could be given a pamphlet giving Lovecraft’s biography, acknowledging his ugly personal beliefs, with his New England background, his influence on the modern horror genre, and the New England setting for his stories. Additionally, the performances suffers from lack of a budget for lighting and props. The regular lighting of Mystic Seaport, an educational living history museum, is too bright for Halloween scares, and the actors needed more theatricality in their makeup and props as well. Mrs. Ainsley should have a leg bone or hard candy white “treats” to give guests. When one character throws a cup of something in the face of another character, the cup is empty. In the print shop, towards the end of the scene, something happens out of view, but the sound effects don’t match it. In one scene, a character wearing gloves could have gotten them bloody, and put on fresh gloves for the next show. The show needs a big ending, like how Jaws ended with the shark exploding. Perhaps they could throw a mannequin off of a rooftop or get someone on stilts to play Nyarlathotep, an evil god. Monologues and acting were powerful, drawing the audience into the crazy spiral of insanity, but the stage combat needs polish.

It’s hard to give a rating to a play with such highs and lows. The concept of the show is astounding and the setting and costuming could not be more remarkable. The actors triumphed in making what might seem silly shocking instead. Yet in the end, the play’s impact was in its individual flourishes; the plot didn’t work. Still, there is no more suited location in modern New England to portray Lovecraft than Mystic Seaport. There is something brilliant in this show, if not fully realized. This is a show that deserves funding for better production quality, and a simplifying revision. I read that last year’s theme was Frankenstein, so perhaps they’ll move on from Lovecraft next year. I will miss it!

For now I’ll give Nautical Nightmares at Mystic Seaport 4.5 stars, but see their potential at a rare 5 stars PLUS, the rating I gave to Sleepy Hollow, the outdoor Halloween show at Old Sturbridge Village.