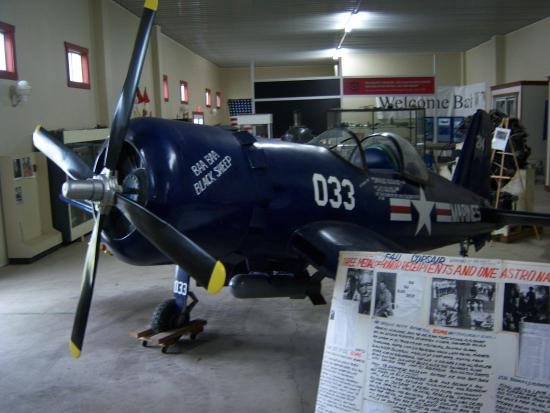 The National Warplane Museum, in Western New York, is a volunteer-driven museum of World War II and Korean War era airplanes, military vehicles, and much else besides.

It is wonderfully interactive. You can climb into some of the planes, and even take rides in their B-17, C-47, and other aircraft! You’ll also see military uniforms, a recreated World War II kitchen (including an ice-powered refrigerator and ice tongs!), and they have events such as a 1940s-style swing dance in an airplane hangar, and a Living History Weekend coming September 28-29, 2018 with WWII re-enactors. The museum is not overly curated, so on a self-guided tour you might get confused by a few things. But that also makes it seem visceral, like your crazy uncle has a garage filled with original equipment from WWII that you can get right up close to! You’ll see displays for nursing, for women’s military service, for African-Americans in military service, and a display on the Red Cross. You’ll find a duck boat, a military jeep, and a fascinating mechanical airplane simulator used to train pilots. It’s all right out there for you to explore, live and in person.

Get a guided tour if you can, such as ours from donor and curator Jamieson Steele. The volunteers are enthusiastic and their passion for World War II era memorabilia is infectious! The volume of the planes and items on display is extensive, including many unique items. For example, they have a B-17 plane that was made up by a movie crew to resemble the original Memphis Belle for a 1990 movie of that name. You get to crawl into the planes, sit in some of the cockpits, touch the old machine guns. Just the main hangar has a dozen aircraft and more aircraft await you outside. Admission is just $8 and of course you can hold your event or even a wedding on site. It’s just east of Niagara Falls and Buffalo, New York, and neighbors the Genesee Country Village & Museum, a living history museum where costumed re-enactors teach you about history.

Here’s a short video of what you may see!

The National Warplane Museum is full of delights and enthusiastic staff, though not the best curated or funded airplane museum I’ve been to. I’m glad to give 4.5 stars.