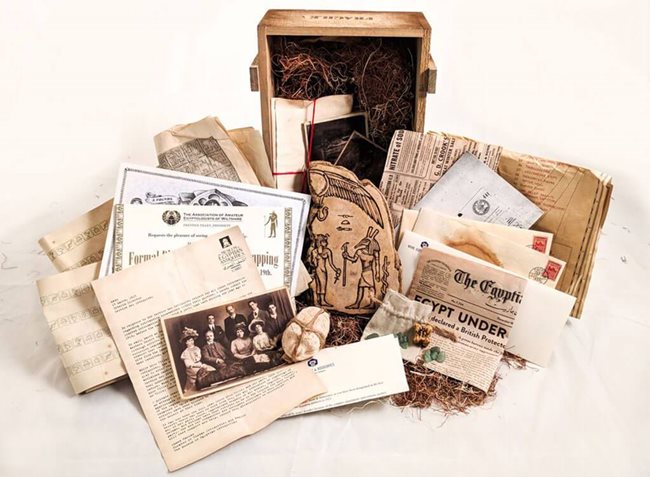 [Editors note: Without my telling our journalist Matt Martino that it was coming, Mysterious Package Company kindly agreed to ground mail him their experience called “The King in Yellow”, first a letter and then a package.]

A letter from Canada arrives with your address and name.  You didn’t order anything recently and certainly not from Canada.  Upon opening you see it has a receipt for a theatre production for a play called The King in Yellow.  You think someone made a mistake and sent you tickets you didn’t order.  Maybe they were complimentary tickets you were signed up for and forgot?  You even Google the theatre’s name trying to find it but nothing comes up.  You quickly forget about.

A few days later there’s a knock at the door.  A delivery man has a large package for you that you know you didn’t order.  It clearly has your name and address on it so you accept and sign for it.  You clearly wonder if this is a mistake.  You open it up in hopes of getting some answers and to your utter surprise; you see something strange and creepy.  A bloody handprint is stretched across a sealed manila envelope.  A wooden crate, nailed shut, sports an evidence sticker making you think this must be some long lost relic from the era of Indiana Jones.

Okay, your curiosity is peeked.  It’s really creepy.  You wonder if it was sent to you wrongly but you have no way to really know.  So you explore.  You open up the packets and the crate to find some very bizarre artifacts.  There is an empty glass vial, mummy wrapped cylinders and an earthen bowl.  The prize piece within all this is statue of some sinister cloaked figure reminiscent of a Lovecraftian God complete with tentacles and horns. The sense that is most associated with memory is smell.  And this experience has not left that aspect out.  The earthen bowl packed up in the crate has a distinct clay smell to it.  This is a major hint as to what its purpose may be, something about ancient Sumerian gods.  The newspapers genuinely smell earthy, like old newspapers tend to do.  That level of realism is amazing.

If you are a fan of horror and spooky decorations, then you have some really cool stuff to check out.  If nothing more, you have some great new items to bolster you Halloween party with a unique atmosphere.  But dig a little deeper and there is quite a bit more to explore and see.

Everything is adorned with runes and just what they mean is a puzzle.  You get the impression there is a hidden language you will need to decipher to solve the mystery.  In the packet you find new articles, pictures and other information telling you about various tragedies most of which seem to involve performances.  You get a massive star chart seemingly of constellations that do not exist, at least not on Earth! You see that the items before you tell a story but also hint at a mystery.  There are hours of clues to go over, should you wish to, or the box and its contents stand alone as a visual spectacle.  News articles, pictures, charts, weird runes on statues all add to the enigma.  At the heart is the singular theme of the Hastur mysterious package is The King in Yellow.  The name may seem familiar to fans of H.P. Lovecraft since he included this character in his universe of cosmic horror.  But if you dig deeper, it goes way back.

As a story, The King in Yellow predates even Lovecraft.  It alludes to a play of the same name that is so deranged that it drives its audience to madness.  From the articles you read, you get the chance that some group puts on this play in some attempt to summon an ancient god, perhaps the one you see depicted in your ominous statue.

H.P. Lovecraft is best known for his works of horror such as The Call of Cthulhu.  He was known to adapt the stories of other writers into his works.  The King in Yellow is one such conscripted story.  Fans of his works will know his stories revolved around mysterious cults, ancient cosmic gods and rituals to summon sleeping evils. So what happens when you solve all the puzzles and decipher the ancient runes?  Well, you may just have to find out for yourself.  Perhaps you learn how to summon demons or maybe you solve a mystery of crimes dating back decades.  There is hours of fun to be had by going over all material presented.

For folks stuck in quarantine and who really want something unique to do that is no more risky then ordering from Amazon, gives this experience a try.  The Mysterious Package Company offers a unique experience for horror lovers, puzzle enthusiasts and folks who love interactive experiences.  Should you want to truly creep out someone, think about sending them one such gift and see how they react to getting an anonymous package out of the blue.

Is horror not to your liking?  There are numerous themes to accommodate anyone’s taste.  There are sci-fi, murder mystery and adventured themed packages as well.