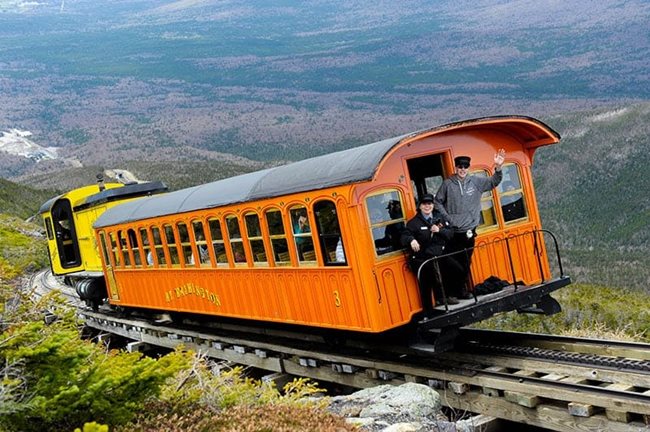 The Mount Washington Cog Railway is a unique experience in two ways. First, you’re riding up a mountain in a train. It’s such a steep incline that the instead of being run on wheels, there’s a gear (the “cog”) that steps you up the slope. The Cog Railway at Mount Washington was the first such system and they’ve updated some trains now to run on biodiesel.

Then, the ride itself takes you to the top of Mount Washington, the tallest mountain in the Northeastern United States at 6,289 feet. You’d have to go to Tennessee or North Carolina to find just slightly higher peaks east of the Rocky Mountains. Although this doesn’t put it in the Top 200 peaks in America (they are mostly in Colorado, California, and Alaska), it’s tall enough that you experience a big climate change and should consider bringing a coat even on hot days at the base. The world’s highest wind velocity ever recorded, 231 mph, was measured at the top of the mountain.

Trains depart from Marshfield Base Station, which has a gift shop and a cafe where you can find ice cream, pizza, water, bagged candies, prewrapped sandwiches, salads, breakfast foods, and snacks. Hiking up Mount Washington takes 5 hours, so fill up on food! You can also drive to the top, but the Cog Railway is more fun. Don’t just show up; buy your tickets and plan your time slot in advance. Some people bring their dogs.

On the train, your brakeman will tell you the history of the railway and point out the important features. On the steepest slope, if you stand “upright”, it will look like you’re standing on an angle in the train as it ascends! Sit on the left for the best views. The train is fully enclosed, so you can see out the side windows, or look ahead to find two windows and an open doorway. Our brakeman gave his tour from in the doorway, blocking our view, but we passed a brakeman who chose a different place to stand. 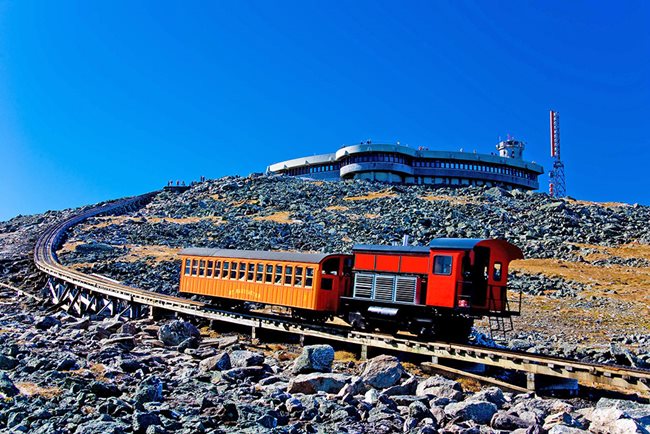 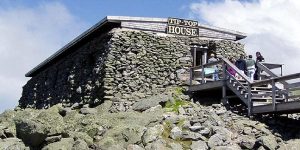 The views are beautiful, and you can see for what must be 100 miles. You can see peaks in Canada, we were told! Even if the summit has low visibility due to clouds — this happens more often than not, I am told — the views you get coming up and down the mountain are worth the trip. As you get higher, you pass the tree line and stop seeing trees entirely. It’s too high for them to grow.

Then it gets colder at the top, because the atmosphere is less dense and you get less of a warming greenhouse effect, we were told. The ride up and back is 45 minutes, but it passes quickly. 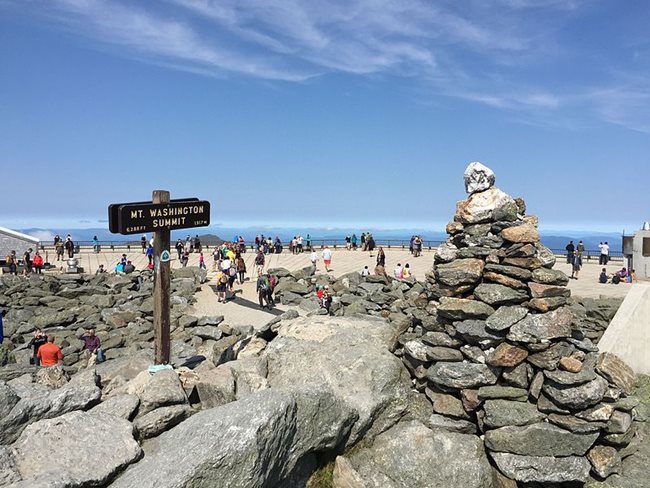 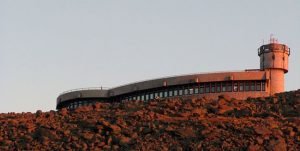 Visit the “Extreme Mount Washington” museum, for just another $2, where you can learn how ice forms and pilot a snowcat, a kind of snowplow. Elsewhere on the summit, The Tip Top House is free. It’s a former hotel turned into an exhibit. Visibility was not good from the summer on the day that we visited, with clouds all around and slightly below the peak, but on a clear day you can see mountain ranges all around, with undulations that look just like waves in the ocean. Their majestic enormity speaks to the power of the Earth.

It’s a great experience, although an hour is plenty of time on the summit if the visibility is not good. I’m glad to give a full 5 stars to the Mount Washington Cog Railway, but do call ahead and choose a day with clear visibility.