MindTrek VR Brings You Right Into The Battle (5 stars PLUS) 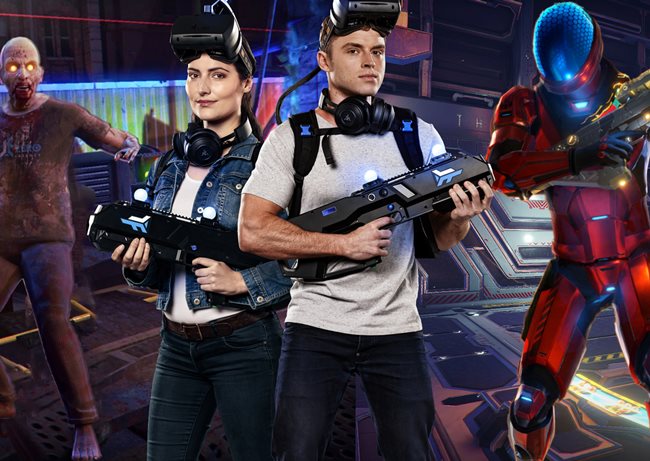 Let me go back a few years to my college days in the 90s when I first tried virtual reality. I put a giant helmet on, one which required cables to be connected to an overhead support to keep it from causing your neck to drop due to the weight. I then awkwardly aimed at my opponent from across a near barren digital landscape to try and hit him with a crude bullet type weapon. I left with a headache and a stiff neck and never once wondered why virtual reality never caught on.

That was then, this is now. Virtual reality has truly come into its own. You strap on your backpack, put on your helmet and ear phones and you are now immersed completely into a 3D environment that I thought I would only see on Star Trek’s holodeck.

You pick up your rifles and choose your teammates. We had three games in which we blast away at each other, trying to score objectives like moving a giant power core to the winning side. Later we have doors to open and data canisters to capture. But don’t try too hard on these objectives or you’ll get blasted, unless you blast away first. The rifles you are given have two modes, single shot and charged shot gun that fires a spread of bullets for close up damage like a shot gun. Some of the stages see you in close quarter combat in which you almost trip over your opponents as you try and blast away. On another stage, you take an elevator up to a different location to try and retrieve a core, but beware, the other team might be trying to snipe you from a distance.

I must say the level of realism is incredibly immersive. You never once feel like you are out of the game. You dodge and hide behind walls. You fire at your opponents. You open doors. You ride elevators. And it’s pretty safe. At one point, I bumped into one of my opposing teammates. The game master paused the games then made sure we were OK and then the game went on. We were only startled and nothing more.

So how did I do? I was pretty much smoked by my teenage teammates. I was expecting that. They are half my age and play video games all day. But I think I held my own in this game. And if I had a group closer to my age, I might have a few more wins. The important thing is we had a blast. I would like to see another scenario which would be more like a team working on a common goal. Like escaping an alien invasion or killing a zombie horde. It was all PvP or player versus player. That way I could bring my less gamer friends or better yet, a date who isn’t into gaming as much. One other annoying thing was at one point, there was a ramp in the VR world which I kept trying to step up on. It made me almost trip and is a potential hazard, but I got used to it. Maybe that is a sign the game is a little too real. Mindtrek VR is a great experience. I left feeling exuberant from it all. I had no headache from choppy graphics or a massive helmet jerking my neck around. It was a fun exhaustive process that left me sweaty and tired from running for 40 minutes straight battling teenage boys. After we had our games guide Carl show us our scores and our performance report. The nice thing, they email you these as a souvenir.

If you are into battling your friends, shooting up the place and running around until tired, Mindtrek VR is a fun experience you should not miss. They have two locations, Woburn and Marlborough.