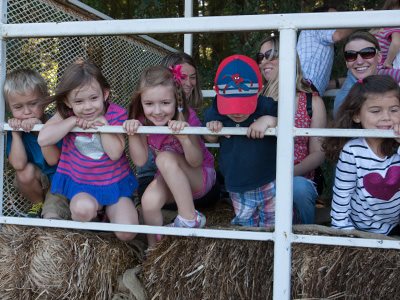 Ward’s Berry Farm is a 200-acre family farm in Sharon, Massachusetts that grows a lot of farm-to-table produce for local restaurants. They also have the greatest variety of products I’ve ever seen in a farm store. Note the signs to see what’s “Ward’s Own”, which various by season, now including carrots, beets, and kale. They have their own branded Ward’s Berry Farm salsa, red pepper jelly, grape jelly, apricot jam, peach chutney, peaches, canned cranberry preserve, and more. Outside the farm store, their grounds open to the public are extensive. There’s a tented outdoor seating area to eat, where in October they sell pre-picked pumpkins and gourds, including cute tiny ones, and some with faces painted on them. There’s a sandbox and a kids’ playground. Beyond that are animals you can visit and feed, including sheep, goats, cows, pigs, rabbits, and chickens, which are maintained by kids from the local 4H club. At different times of the year, you can pick your own pumpkins, raspberries, cherry tomatoes, potatoes, blueberries, strawberries, cut flowers, sugar snap peas, snow peas, shell peas, and peaches. Just pay for a container ahead of time, and go out to the field. Just keep in mind that you have to carry those heavy pumpkins back to the parking lot! Ward’s also has a 3.5-acre corn field that is actually planted sorghum. It’s interesting, but not decorated with signage or dioramas like the more active field mazes in New England. Thankfully, the walkways in the corn field are wide enough that you can easily pass by someone coming the other way. It’s a great way to spend an hour or two outdoors. They also have a hayride.

Their picking season ends by Halloween, but later this year, order your Thanksgiving and Holiday feasts with turkey, pies, and so much more. Of course they host private events such as birthdays and school trips including private hayrides. It’s far more extensive that you would think by driving past, but not at the level of some of the heavily “open to the public” farms whose emphasis is on visitors. I’ll give Ward’s Berry Farm 4 stars.