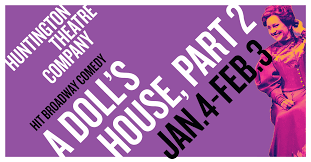 “Men leave their families all the time, but when a woman leaves she’s a monster!” Exclaims Nora, the structural character from the play A Doll’s House Part 2, written by playwright and Tony Award Nominee Lucas Hnath and directed by Obie Award winner Les Waters; now playing at the Huntington Avenue Theatre from Jan. 4th through Feb. 3rd.

A Doll’s House Part 2 is a re-imaging by Hnath of the original play A Doll’s House– which was considered to be subversive when it was originally written back in 1879 by celebrated Norwegian modernist poet, playwright and Pulitzer Prize Nominee Henrik Johan Ibsen. It takes off where the Ibsen play left off, with Nora returning home after a fifteen year absence to face the fractured family she left behind.

“The set-up is there’s a woman who left her family 15 years ago. That’s kind of the only information you need. The play doesn’t get into the specifics of the plot that motivated her to leave,” said Hnath in interview with Berkeley Repertory Theatre Literary Manager Sarah Rose Leonard. The play offers a platform putting forth the double standard of what’s expected of women versus what’s expected of men within the confines and binding “contact”, as Nora put it, of matrimony; that men are afforded far more freedom to come and go as they please, in stark contrast to women, who are expected to stay regardless of any rancid circumstances that may be woe them.

“It was shocking to Nora to leave her family at the end of [the original play, not this Part 2 play] “A Doll’s House…” Hnath said, and when he inquired of today’s feminist scholars of what would be considered a “shocking ending today?” They unequivocally replied that it would still be a “shocking” thing to do even in the new millennium, “that’s still something that is unthinkable”; which brings to mind the axiom “The more things change, the more they stay the same.”

Among the many interesting aspects of the play, one I thought was particularly effective was Hnath’s use of all four characters in the play to present alternating and contradicting arguments on the issue of marriage.   The point of views of Nora’s husband Torvold, daughter Emmy as well as longtime family nanny Anne Marie all served the plot in balancing out multiple opinions in search for some truth about the institution of marriage and its inter-correlated effects on all the parties directly or indirectly involved. The counter arguments served to create interest and dramatic tension to the viewing audience and between the characters which abetted in propelling the plot forward to an almost Shakespearian crescendo leading to an unpredictable ending.

The staging, by Chicago-based designer Andrew Boyce, was deliberately sparse; thus allowing the audience to be fully engrossed in the world of Nora and those whom she had apparently wounded and from whom she now seeks clemency. The ultra-bright lighting illuminated every nuanced facial expression leaving little room for the characters to conceal their often agonizing emotions. Nora’s understanding of the mess she left behind prima facie manifested as farouche rather than fastidious; that is until her ill sense of perception is remedied by her preemptive “victims” determined to set her straight. Nora’s nomothetic beliefs vis-à-vis marriage and the opposing perspectives of the family she left bereft of her presence, forms the foundation for the play’s entire premise. The audience gets to hear the many sides for and against marriage tethered with their respective arguments which are equally valid in their own rights. The comedic elements of the play made the often tense subject matter and resulting emotions more palatable. Nora is back bearing what was considered a startling (and is considered so even today) syllogism—or a method of proof based on stated premises—about marriage in late 19th century Norway and the audience is left to decide which member of Nora’s family best synthesizes with their own attitudes about the subject matter.

Mary Beth Fisher, from the Chicago stage and who appeared in How Shakespeare Won the West, gave a compelling and nuanced performance as Nora, invoking empathy for the plight of her tormented character. We can be mad at her but we can also laugh with her. While Nora never really offers a verbal mea culpa to the people she had conceivably hurt, she does unequivocally and seemingly seeks to be exculpated when she requests more favors from them.

John Judd, a Chicago actor for many years, rendered a typically stoic yet emotionally responsive manifestation as Nora’s husband Torvald. He manages to be both the anchor and the catalyst for Nora’s farouche behavior as he considers the hitherto unheard of requests from a wife of her husband. He has acted in many regional theatres including Berkeley Repertory Theater and Town Hall in Galway, Ireland. Some of his television credits include “Chicago Fire” (NBC), “Empire” (Fox) and “SouthSide” (Comedy Central).

NiKKi Massoud, who has appeared on the New York stage alongside Daniel Craig in Orthello, delivered a deliberately candid and coincidentally witty performance as Nora’s daughter Emmy. She is a semi-seminal character who puts Nora in her place, so to speak. She received her MFA from Brown University and trained at the British American Drama Academy.

Nancy E. Carroll, who has appeared on Broadway in Present Laughter for which she won an Elliot Norton Award, gave a grating, at times expletive filled, comedic and dramatic performance as Nora’s family nanny Anne Marie; having stayed behind to help the shattered household Nora abandoned. Her film and television credits include Spotlight, Irrational Man and Olive Kitteridge.

Tony Award Nominated playwright Lucas Hnath utilized a surfeit of available resources when constructing this groundbreaking and still timely play. He consulted with eminent feminist scholars in an attempt to attain contrasting points of views regarding the institution of marriage for his character’s rapid-fire dialogue and resolute arguments. Hnath also read feminist 19th century writers the likes of Charlotte Perkins Gilman who penned the related story “The Yellow Wallpaper” about a woman oppressed by her domineering husband. A story which I analyzed myself as part of my classic American Literature class in college. All of Hnath’s efforts came to fruition in producing a well thought out, evocative and galvanizing play.

The #MeToo movement has blasted the door right open on the plight of women in a male dominated world. Women are coming forward with their stories of feeling the weight of oppression, whether it be in the form of workplace inequality or marital woes, they are ensuring that their voices are heard LOUD and clear! Because according to Nora–who considers marriage to be a great big lie– “When you lie to yourself long enough, you lose your voice.” A Doll’s House, Part 2 reminds us that all of us are responsible to ourselves to speak out against subordination and social injustice and given the current political climate, there’s no better time like the present. I give this production 5 out of 5 stars.

See A Doll’s House, Part 2 on the Huntington Theatre website.

Jacques Fleury’s books Sparks in the Dark: A Lighter Shade of Blue, A Poetic Memoir about life in Haiti & America was featured in the Boston Globe. It’s Always Sunrise Somewhere and Other Stories is a collection of short fictional stories spanning the pervasive human condition. Their topics range from politics to romantics, from sex to sexuality, from religion to oppression. His CD “A Lighter Shade of Blue” as a lyrics writer with neo-folk group Sweet Wednesday” is available on ITunes. See www.authorjacques.com.