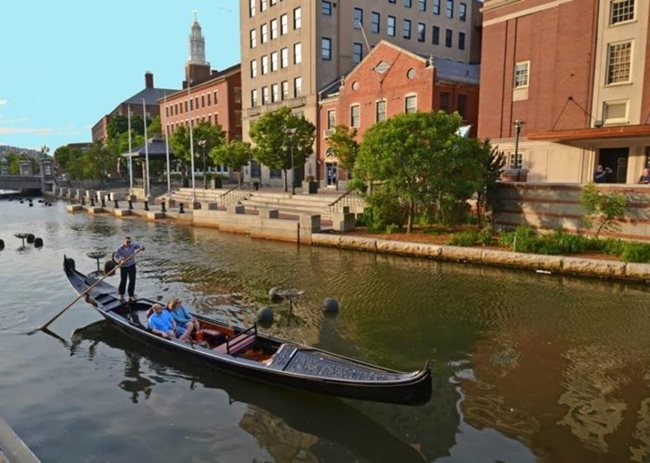 It’s no secret that Rhode Island has a lot of Italians. In fact North Providence, is 35% Italian making it the 9th most Italian city in the USA, excluding small towns. (Johnston, Rhode Island is #1, with a 47% Italian population, and towns elsewhere in Rhode Island, New York, New Jersey, and Pennsylvania also top the list.)

So when you come to Providence, expect to go to Federal Hill for their Italian shops and restaurants, and then come downtown for gondola rides in the style of Venice, Italy, for a romantic (or platonic) trip up and down the Providence River.

The Providence River runs right through the heart of downtown Providence, by the state capitol building, the Providence Mall, and Rhode Island Convention Center. You may have heard that it’s the setting for Waterfire, the Providence celebration where metal baskets dotting the river are filled with wood and burned at night, causing a pleasant glow for visitors who come to walk by the water. 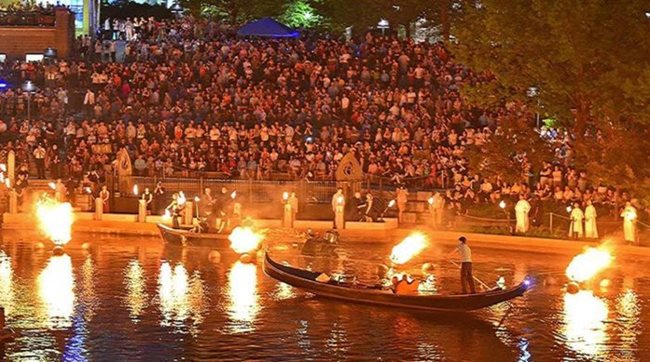 You’ll see gondolas and other boats on the river during Waterfire, but that’s not the best time for a gondola trip. It’s more expensive at that time, the river is crowded with other boats, avoiding the fires is tricky, and being witnessed by thousands of people is distracting, making it less intimate. So come to La Gondola any other day, from morning to evening. We happened to come at sunset on a warm day in August.

When you get to One Citizens Plaza, if you don’t see the gondolas by the river, you’re on the wrong side. The river actually forks there, so head southwest around the building to see them. If you type “La Gondola” into Google Maps, it shows the exact location.

We reviewed the most popular package, the Viaggio dei Sogni (pronounced “sony”),which is a 40-minute gondola trip, with a gondolier who will sing or point out tour spots, as you wish. Our gondolier explained that she is one of only 10 women gondoliers in the world. In Venice, only the men row and the trade is passed down from father to son. 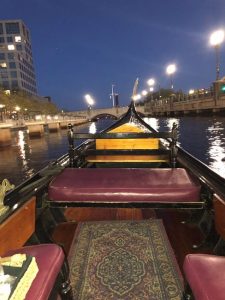 We were expecting the trip to be slightly touristy, a bit Disneyfied, but were pleasantly surprised to find that La Gondola takes culture seriously! We set out in the “Cynthia Julia”, the first authentic Venetian gondola built in America. It’s 36 feet long with padded seats, a red rug, brass trim, and exceptional carvings with old Italian gods. The seats were comfortable and the water completely still, so there was no rocking except when we got in. (Some kind of bolted down metal grip at the dockside would facilitate embarking and disembarking.)

La Gondola doesn’t have a liquor license, but you can bring your own alcohol and food. They include cold water bottles in an ice bucket, and ‘wine biscuits’ that taste dense and dry, like scones. The basic trip is $89, and you can add a musician for $50, or include wine glasses, framed photo, truffles, and sparkling cider for $50.

La Gondola is a magic trick, making you feel alone and at peace, even though you’re in the middle of a bustling city. And there’s plenty to see. Other cruises, for example Boston Harbor Cruises, pass by many landmarks, but they’re far in the distance and you seem to pass by slowly. On the Providence River, you pass under low stone bridges, see numerous sculptures including the Irish Famine Memorial and turning around at the Textured Gear. You’ll see modern buildings and old buildings. While you can’t see the sun setting directly, you’ll get long views of the colored and dimming sky. The most amazing thing I saw was actually high water marks from past Providence floods. They are marks on the riverside wall showing how high the water rose during hurricanes of 1938, 1954, and 1815.

The illusion of Venice is very good considering that you’re at the heart of a major US capitol, despite occasional loud automobile noise from the street. Perhaps someday, they will move the city roads farther from the river, creating more quiet and more walkable parkland.

On the water, you’ll pass kayakers and tour boats. The walkways on each side of the river are low, giving you clear views of the pedestrians and skateboarders there, and them clear views of you. We did not quite feel comfortable having a romantic moment, ignoring the gondolier behind us and the people around us, but if you have a more free-spirited temperament, perhaps you could.

The gondoliers are not given any core information that they are supposed to relate, doing whatever they like with the trips. So you’ll get a different experience if you returned for a second trip. Ours gondolier told us that she sets the trip to what her guests seem to want, whether it’s mostly singing, mostly talking about landmarks, or just to stay silent, giving her guests some space. We got a bit of all three on our trip that day. 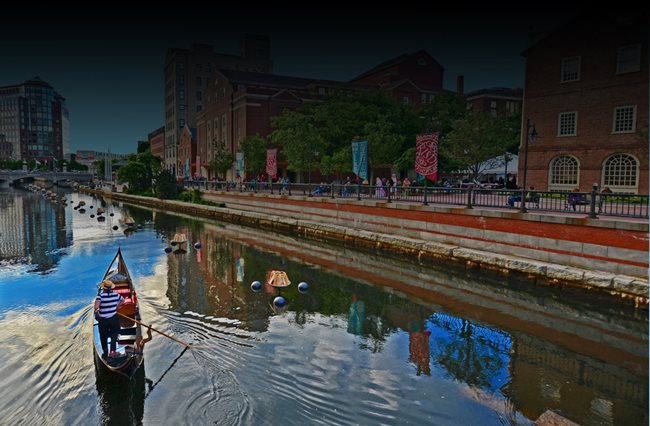 The songs your guide sings will also vary. Our guide had love songs, wedding songs, travel songs for out-of-town tourists, or can sing Happy Birthday in Italian. All the songs are in Italian, and if you are not Catholic, well, you’re going to get religious songs as well. It’s all part of the cultural experience.

One song was a traditional Venetian sailor’s prayer to Santa Lucia, the patron saint of gondoliers. In another song, a gondolier sees a beautiful woman on shore, and tries to convince her to take a ride. Another was a Christian song about the sacrifices of the Virgin Mary. We had fewer songs than we expected, perhaps because we asked so many tour questions, and perhaps because our gondolier held them to stopping under a bridge, for a bit of additional privacy and echo.

La Gondola is a unique experience that you can’t get anywhere else in New England. However, with a price of $108 ($89 plus an expected tip), you might expect more of a ‘show’. The trip was comfortable, but not an extraordinary level of comfort with flourishes and grand gestures (for example, water in a glass bottle rather than plastic disposables, an elaborate bon voyage, or incorporating one guest’s name into a song and making it a dedication from the other guest). We got tour information and a nice cruise, but not a big personality whisking us on an adventure to remember for a lifetime. Surprisingly, an ability to sing is not part of the La Gondola interview process, and they rely on gondoliers to train themselves on the songs and make up most of their own patter on the trips. We got lucky with a college voice major with a choral background, but your luck may vary.

Perhaps La Gondola is especially for people with an interest in Italian culture, or looking for a romantic gesture, more than it is for those seeking a generic river tour at the best price. My recommendation is that you decide in advance what kind of tour you want, whether it’s all silence, all singing, or all tour guiding, rather than a mix that gives only part of each. Then ask for that kind of gondolier, something which is easier of course if you schedule in advance.

There is nothing like La Gondola for hundreds of miles, and its set in a beautiful, artistic city area. My father grew up in Providence and talks fondly of how the downtown area has been renovated, filled with the arts, and is now a social center. It is worth the visit and easily accessed by car or commuter rail. Take in the Roger Williams Park Zoo, the RISD Museum, ride with La Gondola, and then have dinner on Federal Hill. I’ll give La Gondola 4.5 stars.