In Medieval Europe, the black death wiped out nearly seventy percent of the population only to give way to what could be categorized as the largest rebirth of art and commerce the world had ever seen up to that point in history.  This flourishing of the human spirit became known as the Renaissance.  In modern times we too have lived through our own plague only to emerge into a greater world.  Luckily, we didn’t lose so many.  So came and live the Renaissance at King Richards Faire in Carver Massachusetts.

For 41 years King Richard Faire has opened its gates to transport people back in time.  Located less than an hour from Boston, it is an excellent place to attend as fall rolls in.  The Faire grounds are nestled into a lively forest that offers shade in nearly all corners (except the Joust field but more on that later).  At every turn there is a new shop ready to sell you numerous wares.  At select intervals you will find stages both large and small that offer entertainment of various types.  Both food and drink are plenty.

You break down the major aspects of the Faire into four major portions.  These are shopping, food and drink, entertainment and games and rides.  Among these you are certain to find something for everyone.

The first aspect you will notice is that the entire place is laid out like a giant mall.  On every wall there is a unique shop that looks like it was built back in jolly olde England.   For those that love leather, you are in for a treat.  Many shops deal exclusively in tanned cow and emanate a thick leather scent.  Belts, boots and pouches are everywhere.  Clothes from the renaissance days are available to rent, try on or even pose for a photo wearing.  Need a cloak?  They have it.  Want to finish off your period garb with an accessory?  Hit up the jewelry shops or buy a hair garland.  Even chain mail becomes casual wear when artisans turn what is usually armor into bracelets and head bands. 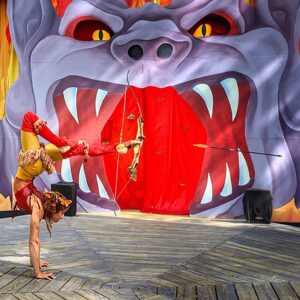 For the ladies, you can lace up into a bodice or corset before you buy your long flowing dress.  For the gentlemen or more likely the barbarian, there are plenty of sharp pointy objects to catch your eye.  Swords, axes and war hammers are readily available for you to plan your pillaging and plundering in the spirit of the truest pirate.  Though no tattoo parlors were present, you can get a temporary version in the form of henna.  Artist paint dramatic designs upon your skin that last only a few weeks before fading away.

What’s left to buy?  A goblet to imbibe your many libations of course.  Renaissance Festivals are known for one having one drink in particular – mead.  Mead is a wine made with honey.  And king Richards had three flavors to try – original honey, raspberry and pomegranate. If sweet wines are not for you, the taps have plenty of beer and pumpkin ale to satiate a king-sized thirst on a hot day.

And what about the royal feast?  The food is plenty as well.  bread bowls, bloomin’ onions and chicken wings are among the foods you can sup upon.  Many fan favorites are available like pizza, burgers and mac and cheese.  Of course, the holy grail of the Ren Faire food is the Turkey leg – a huge haunch of meat fit for a king.  There is plenty of food choices but none of it is gourmet.  The quality leaves much to be desired.  Adequate is the best way to describe it.

Here is where there is a distinct negative.  All food and drink must be purchased with food tickets, which are sold at a separate booth.  They only sell the tickets in blocks of five dollars and there are no refunds.  This means you are guaranteed to spend money you won’t use.  You are certain to have a few tickets left over that are worthless unless you buy more.  This is so very annoying and seems designed to nickel and dime the patrons into overpaying for what is already pricey but ultimately mediocre food.

Another aspect of King Richards Faire are the games and rides.  Forget the carnival games you know, here the games center around the arts of war.  Pick up a weapon and attack.  Axes and knives can be thrown at targets.  Bows and arrows are fired down range.  For kids there are darts, a jousting ride and mini toy cross bows.  And for the drinkers, there is the mug slide – a drinking version of shuffleboard using beer steins.  And for the thrill seekers, there are human powered swings and rides.  And of course, there is the good old test of strength in which you can wield a massive hammer and show off your best Thor impersonation. 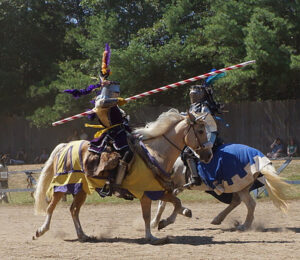 The true draw for many at the Faire is the entertainment.  Danny Drake juggles knives and mousetraps while strolling on a rola bola.  The Accidental Acrobats perform great feats such as upside-down archery with feet only! Thunder cracks at Jacques za Whippeur show as he cuts a cord in his mouth with a flaming whip.  The Sturdy Beggars gross out the crowd with the bawdy but interactive Mud show.  Many more entertainers filled out the schedule.

One of the truly interesting places at the Faire was the Dragonwick Dungeon.  Looking like an authentic castle from afar, enter it and you take a walk through a maze-like dungeon that showcases scenes of real medieval torture.  It is as grotesque as it is educational since the scenes and implements are all taken from history.  For a fun yet macabre tour that also teaches history head here.

The piece de resistance is truly the Joust.  Knights in armor ride out on horseback and perform feats of daring.  At first, they showcase their horsemanship as they collect rings on their lances.  Eventually this becomes a full-on joust as the knights tilt full speed at one another striking each other lance to shield.  Once the knights are knocked to the ground, they continue to fight armed with swords, spikes, shields and axes.  The whole thing is hokey and has a pro wrestling vibe, but that is part of the charm since the premise of the Faire is to suspend disbelief.

One final note is that the bathrooms – known as the privies, closed too early.  The final revels ended, and the privies immediately closed.  A very rude person shooed us away leaving us a long drive to the next available bathroom.  Had this been a costumed character informing everyone the place was closing that would make it slightly more tolerable, but this was more like the janitor kicking you out.  Many people had to drive over an hour to get to the Faire so this was a major inconvenience that could have been resolved with a few port-a-johns in the parking lot.

King Richards is a fun day of shopping, eating and drinking.  Add in the games and rides plus a dungeon walk for unique activities to do as well.  Finally, be entertained with jesters, jugglers and beggars before watching mortal combat between the knights of the joust.  So let’s give a hearty Huzzah to 41 years of cheers and beers at King Richards Faire.

Check out our video review https://youtu.be/m1M45tM0Bqw