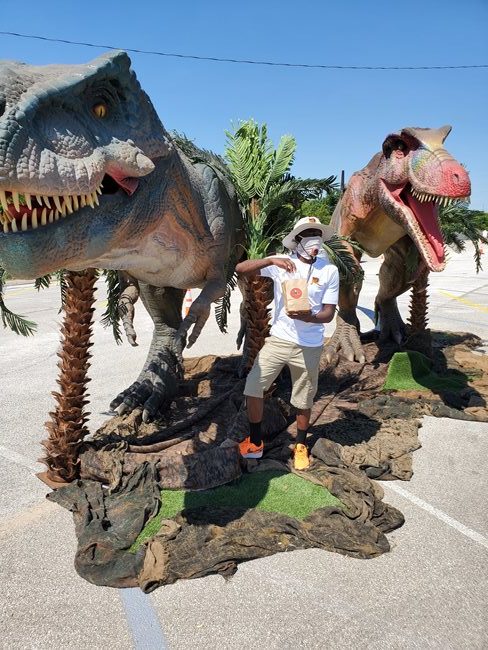 These days tiny viruses seem to rule the world. But once, the kings of the planet were dinosaurs. When schools, theatres, and stadiums are closed to the public, what can you do to shake off cabin fever? Go to see the largest creatures of all time!

Jurassic Quest lets you and your family explore the world of dinosaurs from the safety of your own car. Rather than go inside a museum, you completely avoid interactions with crowds by staying in your vehicle, viewing life-size animatronic dinosaurs. So put on your safari hat and get ready to meet an Iguanodon! This is fun for the whole family.

New England has other dinosaur destinations, including Dino Land at Edaville Railroad on the South Shore. In Connecticut, there’s Jurassic Giants at Mystic Aquarium, Dinosaur State Park and The Dinosaur Place. In Western Massachusetts, there’s also the Nash Dinosaur Track Site and Rock Shop and museums with bones including Beneski Museum of Natural History, which has the most extensive collection of dinosaur footprints in the world.

But Jurassic Quest is delightfully close to Boston, and features beautifully constructed, animated dinosaurs. It is a visual feast and a real thrill, and wonderful that they’ve adapted to the virus by allowing cars to drive through.

To prepare for your quest, download the audio tour from the Jurassic Quest website, which tells you about the dinosaurs you will see. At various places on your drive, you will be prompted to either start or pause your audio as you go. It is best to play the audio through your car speakers, if you can, so that everyone in the car can hear the tour clearly. Then you get to see many dinosaurs! The actual exhibits are very well made. The long extinct dinosaurs came to life, many of them moving and even roaring as you drive by. All of them approximate the size of the real dinosaurs, both large and small. At times the dinosaurs will be the size of dogs. At others, they will tower over not just the individual but the vehicle they are riding.

You will see creatures from the land, sea and air. Among the seaborn monsters you see are the Plesiosaur which many think inspired the legendary Loch Ness Monster. But the biggest of the bunch is the Megalodon – the largest shark to ever swim the seas. It is easily one of the largest exhibits and truly makes one feel small, and perhaps just a little scared to swim at the beach!

We see a Pterodactyl like Quetzalcoaltus – named for the ancient plumed snake god of the Aztecs. This is a great example of death from above. It is one of the only airborne dinosaurs you’ll see, but it is impressive, being even bigger than an average car. It is hard to believe it ever flew at that size, but science says otherwise. The vast majority of our dinos are of the land roving type. We see the diminutive raptors that are familiar to movie buffs as the hunters that stalk humans. In this incarnation, they seem much friendlier. Among them are the Allosaurus, the bull-like Carnotaurus and the aptly name Giganotosaurus. All are favorites due to their monstrous appearances. The mighty brontosaurus and the spiky stegosaurus are there too, to represent the more peaceful herbivore dinosaurs. And of course, we have the mighty tyrant king Tyrannosaurus Rex. The audio tour does quite a bit to add facts and context to the exhibits you see. You’ll miss much if you simply drove through a parking lot and just looked at the dinos without the added ambiance. There is a bit of story in the audio as well, which, though a bit corny, is something for kids to get into. Without spoiling the story, some smaller children might find the thought of dinosaurs running amok a bit scary.

Consulting an expert on dinosaurs, you discover what you learn is highly accurate. On the audio tour, Trevor Schwartz, who has been studying dinosaurs for more than a decade confirmed the authenticity of the lessons we gain as we go. If you think that your kids are missing out on the educational experiences of in person schooling as well as trips to the museums, rest assured that Jurassic Quest is informative and fact-based. It makes it a true learning adventure not just a fun experience.

Jurassic Quest is a touring exhibit that takes place at Gillette Stadium in Foxboro, and of course you do not drive onto the football field. Instead, the tour leads you through the parking lot. This deflates the experience a bit. You expect to encounter dinosaurs in a jungle, not next to a mall. However, that’s the world we live in. We must stay safe in our cars and not just from oversized lizards.

This inconvenience is easily overlooked when you see the incredible detail of each individual dinosaur. The texture of the skin and the lifelike teeth are all carefully placed in each exhibit. The accurate size and realism of the animatronics is a testament to the craftsmanship put into this show. It is truly impressive.

Although this would be a 5-star experience if you could walk around, take photos, and take your time, the parking lot diminishes the experience. You never get really close and, with a line of cars behind you, you can’t stay for too long. I might suggest a painted plywood jungle background behind the dinosaurs to give them ambiance and disguise the parking lot environment. Or allow cars to pull out of line, to pull over to the right (allowing the cars behind them to continue)  so that if you want to get a good long look, you can do that.

Still, a solid 4 stars for Jurassic Quest, where their tour in Boston was extended by a week due to demand.

So gather the family and start up the caravan for a dinosaur safari. There is no excuse to stay home when you can stay safe as well. Head to Foxboro, now through September 20, and check out Jurassic Quest for an educational and interesting excursion.