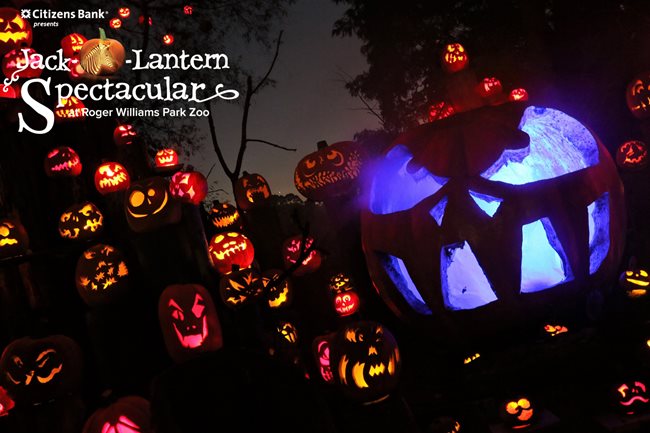 Every October, Roger Williams Park hosts three Halloween-themed events. You can walk along a nighttime trail with thousands of carved pumpkins, take a short zipline ride, or, under separate management, paddle a swan boat around the pond seeing nighttime displays.

It all centers around the zoo, although don’t expect to see animals, as they are sleeping or snuggled away from the cold. (Last year we saw elephants and flamingos, but I don’t know that they’re part of this year’s route.) Then you walk through the forest, along the shore of a lake, passing pumpkins on your left and right. The event takes place at night, and it’s beautiful to admire the nighttime sky, the lake, and the pumpkins lit from within. Dozens of pumpkins hang above you in tree branches, too! They’ve got 5,000 background pumpkins, which are carved into cartoon grimaces, 120 “intricates”, oversized pumpkins that have a detailed black illustrations and white engravings. You’ll even see giant pumpkins weighing a ton or more. All around are ambient sounds, mainly music.

It’s not scary and there are no actors to jump out, but you’ll see a few skeleton dioramas, including a cemetery with a coffin and gravestones, and Komodo dragons. On some nights this season, the Zoo hosts themed nights. We happened to see Harry Potter night, which added six actors in costume, and next week they’ll have comic Superhero nights.

Thankfully, the paths are wide, so you can stop and admire the pumpkins and take photos without feeling that you’re being herded from behind. That being said, your best bet is to attend on a Monday, to avoid crowds. The event really is open every day of the week, unlike most Halloween attractions. The path is divided into sections, with the ‘intricate’ pumpkins showing scenes from that theme. The images are taken mostly from popular culture, with some for kids and others for adults. There’s a Weird Section including Big Foot and UFOs pumpkins. Another section honors Stranger Things, there’s a videogames section with Silent Hill and Minecraft pumpkins. The Stephen King represents Carrie, Christine, The Green Mile, It, and others, and there are sections called Tales of Love, Harry Potter, Comic Books, Children’s Books, and more. The lake has fountains with green lighting. It’s a wonderful night out and about, with cute kids all over. Eventually you’ll come to the “laughing tree”, where an enormous carved pumpkin seems to be leading a party of hundreds of followers, all squeezed into a single diorama, with laser light coming out of another pumpkin making green spots all over. The displays just go on and on. It’s remarkable! We got a chance to speak with John from Passion for Pumpkins, which carves the pumpkins for the event. Because the pumpkins spoil, they must make 4 versions of each pumpkin, and they begin only a few days before the Jack-O-Lantern Spectacular, employing dozens of artists, with a studio open 24 hours a day. The ‘intricate’ pumpkins take 4 hours to draw, which they do freehand — I’d always assumed they used a slide projector. Then it’s another hour to carve out the engraved areas, shaving off parts of the pumpkin so that the light from within shines through, making white lines, and then a half hour to hollow out the pumpkin. The guts get put into compost. You’ll see that each pumpkin is stuffed with tissue paper, to diffuse the light. Passion for Pumpkins also works in Kentucky and Minnesota.

At the end of the trail, near the vendors, you’ll see signs for the zipline, a nice ride for two people that only looks scary from below. Also, under separate management, you can rent a swan boat from La Gondola. They have reserved parking, so you can stop right next to the pond with the lights. The swan boats are beautiful, glowing with LEDs, and are paddleboats that you can paddle around, admiring the fountains with lighting, the blue LED giant “spider webs”, the orange holiday lights, and there are six archways to aim for and paddle through. Or go underneath the bridge to discover the haunted ship with a skeleton pirate! It’s only $5 for kids and $10 for adults.

La Gondola runs paddleboats all season during the daytime, but October is the only time when they have nighttime paddles. At other times, they have a Venetian water taxi you can tour in, and while I can’t find it on their website, presumably they still give gondola tours on the Providence River. The Roger Williams Park Zoo is open all year with a new Rainforest exhibit opening in November or December, a 10,000 square foot building in the zoo with animals indigenous to the rainforest. The Jack O’Lantern Spectacular and the swan paddleboats run this year through November 4, if you prefer to come after the Halloween season. Not scary, but definitely not just for kids, the Jack-O-Lantern Spectacular at Roger Williams Park Zoo is a relaxing excuse to enjoy a fall night before it gets too cold. The pop culture references of the pumpkins are a lowest common denominator, but the pumpkins hanging from the trees, and the lighting of the lake, are more creative. With the addition of the zipline, the vendors, and the swan paddleboats, you get an entire evening of activities. I’ll give it 4.5 stars.