Intramersive: Daemonologie Goes Beyond Living History To Putting You on Stage in 1849 (4.5 stars) 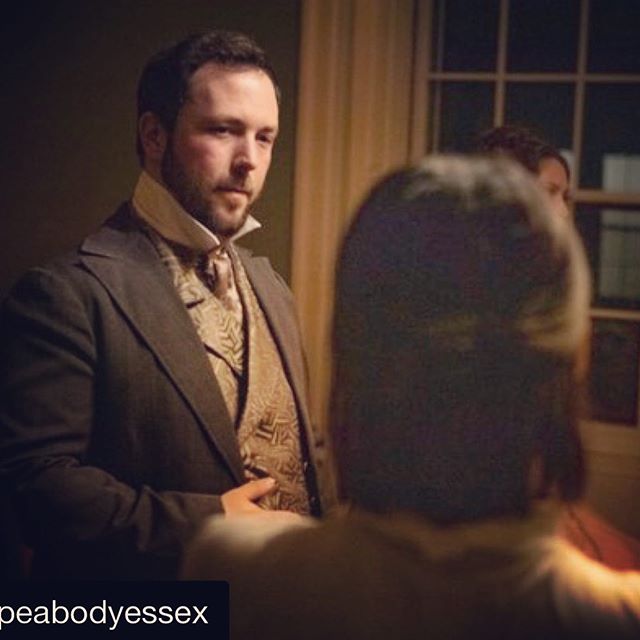 Intramersive is a theatre troupe in Salem that hosts interactive, immersive games. It’s like a murder mystery dinner, because you interact with the actors. But instead of sitting down and eating — there is no meal — you are free to wander around an entire house, observing or speaking with actors and other audience members in each room. Instead of a murder mystery to solve, in the case of their show Daemonologie the story is a Halloween-themed spooky seance. What will happen during the seance? Do you believe it to be true, or could it all be a hoax?

You are free to walk around the theatre space, speaking directly to the actors and to other players. You literally become part of the story, even more than the audience at an improv comedy show shouting out words to hang a scene on. Such interactivity is inspired by a Boston invention, Live Action Roleplaying Games, or LARP-ing, which was invented around 1983, after the invention of Dungeons & Dragons, the roleplaying game. It’s interactive like an escape room, but toying with the props is not part of the experience. Everything is done through your interactions with the actors. 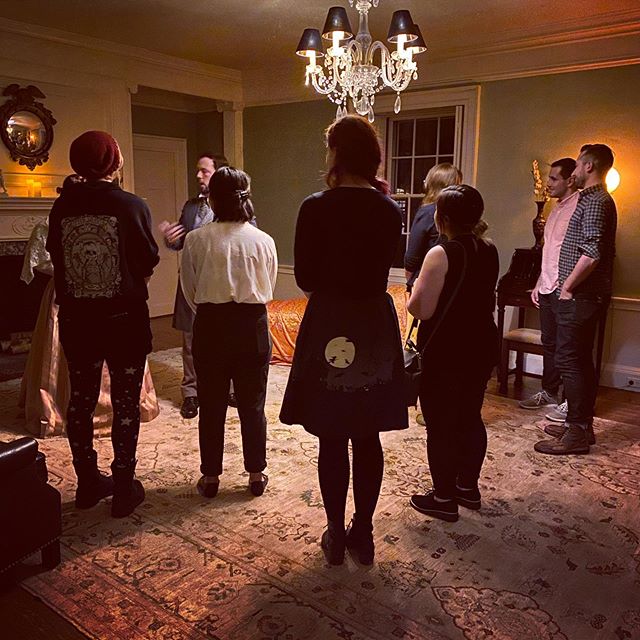 The action takes place in 1849, at the Cotting Smith Assembly House in Salem, Massachusetts, a real historic building built in 1782 as a clubhouse for balls and concerts, which George Washington once attended. I’ve been to dozens of historic homes in New England, with their roped off dioramas of lace and wooden chairs gathering dust. With Intramersive, they bring in props including tables and chairs. So you can not only explore, but sit and truly inhabit the historic assembly house for a time. (A few more chairs would be a good addition, so that over the two-hour experience guests who need to sit may always find a spot.)

They certainly know their history! Intramersive was founded by historians to tell tales of the Salem Witch Trials, and I sense that their troupe was inspired not so much to tell a story, with a dramatic arc and character development, as to recreate an authentic past that you can visit. The figures in the show, whom you meet immediately, so this is not a spoiler, include writer Nathaniel Hawthorne of House of the Seven Gables, a free black woman and land owner, immigrants fleeing the Irish Potato Famine, and a senator’s wife.

The costumes, props you can touch, chairs you can sit in, and the acting combine to create a powerful effect. The actors are glad to talk about their everyday life, which to me brings history alive more than reading lists of dates and military conflicts. Surprisingly, it seemed like there was no question they could not answer. For example, I asked, with the potato famine, couldn’t the Irish have eaten, you know… other food? Non-potato foods? It had nothing to do with the story or American setting for Daemonologie, but I was just curious, and they had the answers. (Their wheat and barley crops also failed, apparently.)

The acting is excellent, without a weak link in the cast, and kudos especially to Dev Blair and Rene Levesque who made their roles so colorful. Amelia Smith was completely convincing as an innocent waif lost in a stream of events. The acting is especially notable because an interactive theatre show cannot be completely scripted. There was a lot of fast thinking, and it worked, with the show remaining seamless despite the audience interruptions and questions. 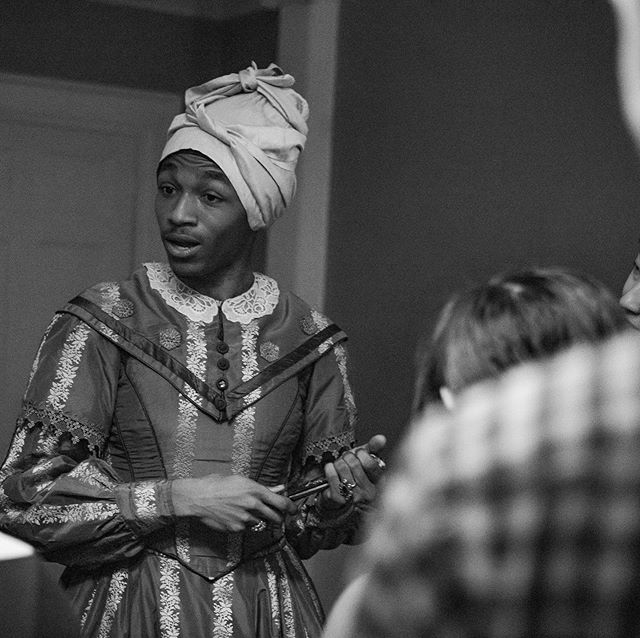 Coming in, of course I was hoping that the seance would be true (in the world of the show) and that Satan would personally show up with a fog machine or something nuts like that. The show didn’t rise to that level of spectacular stage effects, and it was more interesting and spooky-fun than scary like a Halloween attraction. However, a few magic tricks by the actors created some marvelous, though smaller scale illusions. The big finale at the end should in my opinion have been bigger.

Events INSIDER was founded to support the arts, and I respect the creative courage of Intramersive. I’m about to give Daemonologie a very high rating of 4.5 stars, but a few aspects held it back. We learned why after the show, when the producers and cast held a “talk back” for the audience to ask questions and give feedback.

They told us that modern people look down on the old-time people of the Salem Witch Hysteria, like we are better than they were. Part of the show was to demonstrate that a modern audience can still be gullible, giving way to superstition and a mob mentality, acting hysterically. This experimental premise seems wrong to me. Humans as early as four-years-old understand the separation of fantasy and reality. Although I slipped into a normal suspension of disbelief that allows you to follow and be carried along by a story, there was never a time when I thought that the choices we were making — the supposed hysteria — was about real people and events.

When a magician calls you on stage and tells you to sit, you don’t ruin the show by grabbing his hat and looking for the rabbit. You sit. For the purpose of Daemonologie, I gladly took part in some hysteria, acting a role myself, because it was a fun premise for the show, and I wanted to see what would happen. Certainly, in an age where so many Republicans think that Obama is a Muslim, and so many Democrats fear the science of vaccines, we are still open to group think and a mob mentality. I believe we’re still open to political manipulation in the way that created the Nazis. But regarding magic and superstition, education levels have risen in America since 1849, and religiosity has fallen, so there’s really no saying that today’s level of superstitious gullibility is just like yesterday’s. 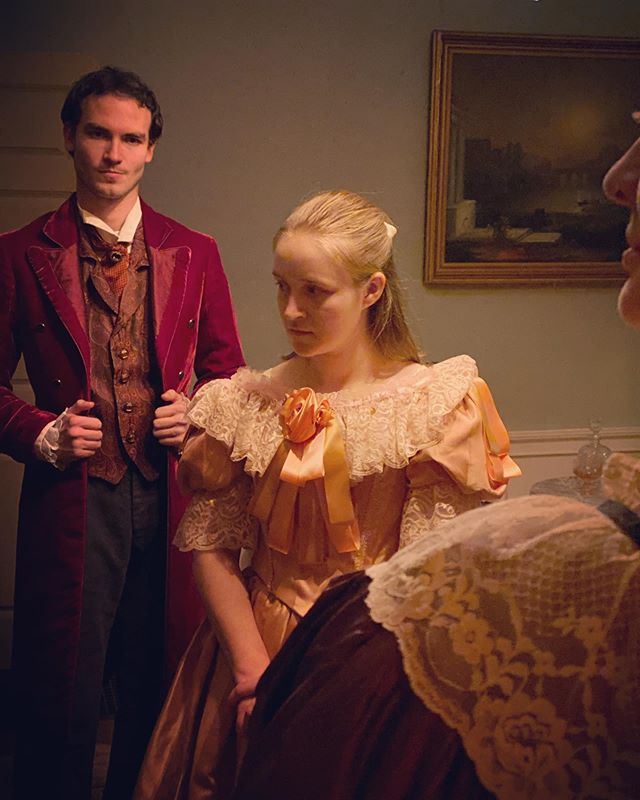 They also told us that they wanted us to experience 1849 and to meet certain characters, to get a sense of history. You don’t go to Plimoth Plantation and expect to solve a murder mystery. The costumed period actors there are all getting along, living in a sort of timeless stasis. The Intramersive show also had a kind of timeless stasis, and unfortunately this affected the storyline. Having 8 actors, there were 56 opportunities for conflict. But only two pairs of actors came into conflict, having something to do with a wrist, and what happened turned out to have no bearing on the ending.

Conflict creates interest in a drama. Without tension, there is no story. There didn’t seem to be character development, or plot twists excepting the one creating the conflict just mentioned.

I also don’t know that the experience counts as a game. In the talk-back, the producers told us they were watching us as much as we were watching them, and that there was no real correct ending. This reminds me of the movie Clue (1985), which came with several endings, each of them showing a different murderer. That was a clever idea, but if there was no correct ending to Clue’s murder mystery, that’s the same as saying that collecting clues and trying to solve it was pointless.

Similarly, it was pointless for me to try to win or “solve” the interactive game of Daemonologie. If the seance was a hoax, I wanted to uncover the who, what, and why. Those are natural story questions introduced by one of the characters, seeming natural that the audience would want resolved. If the seance wasn’t a hoax, I wanted answers there as well. Was someone being blackmailed? Who was this demon, and what did it want, and was there a secret alliance on behalf of some of the 8 characters to harm the others, and why?

I didn’t get anywhere with this approach, and later learned that there sort of was nothing to learn. The only clue I discovered was two characters were romantically involved, which turned out to be irrelevant to the ending. It’s a bit like the TV show Lost, which created an astonishing atmosphere making you so curious, and then turned out to have no answers, no secret framework holding together all the pieces. I won’t give spoilers, but can say that character motivations and plot twist reveals simply weren’t part of the show — except that one previously mentioned conflict about a wrist that, as I said, ended up having no bearing on the ending. This undercut the drama of the story, lowering the stakes.

At the end, the audience was asked to vote on what should happen in the show. We were given four options having to do with the seance and its resolution. Unfortunately, in the fantasy world of the show, we didn’t get the tools we needed to make that decision.

Let’s take the world of Superman as an example. Start by assuming that you know nothing about Superman. But you join a game and learn that Superman is weakened by kryptonite, and strengthened by sunlight. Then you use this knowledge about the world to make decisions. At the end, let’s say Superman is injured, so you decide to remove the kryptonite in his pocket, and move his body out into the sunlight. You have discovered clues, learned the rules of this fantasy world, and saved the day.

With Intramersive, the final audience choice had something to do with Location A and Object G, but we got no information during the show about Location A and Object G. Is it really a game, if there was no way to win it (to get the tools we needed to influence it towards a successful outcome)? Did we really have agency, in an interactive LARP experience, if we did not understand the factors to making choices?

Well, I get it, that Intramersive wanted to show what it’s like to be confused and lost in a mob hysteria, but is being confused fun? Perhaps they should have told us to ask historical questions and not try to resolve the questions of the evening’s drama, being more like witnesses. At times the actors were very approachable, standing individually and taking questions from guests. During much of the show, however, the actors were unavailable, engaging each other directly in apparently prepared scenes, where the audience apparently wasn’t support to interrupt to ask questions.

As a story, the show had an astounding premise and a few good scenes that were wickedly enjoyable, but there were also plot holes, lack of tension, the rules of the fantasy world not congealing into a way that could be understood, a bit of frustration not getting anywhere questioning the actors for a roadmap to the story, a lagging second half, and a grand finale that might have been more spectacular.

This was no accident or lack of talent, but just it seems that the artistic thrust of Intramersive is more of a timeless stasis showcase of the past. As a piece of living history, the experience was fantastic. The acting, costuming, character backstories, historical accuracy, and real setting in an actual historic building, all combined to make a delightful evening. I would recommend either adding more story and game elements, or keeping it a timeless stasis but reframing audience expectations, by not calling it a ‘LARP’ or game, and by asking us to ask questions only about history, not about the mystery and story portrayed.

Intramersive knows exactly what they are doing and they achieve it: a visit to the past that sets a mood. There’s nothing like it in all of New England, and I do recommend it. I’ll give Intramersive: Daemonologie 4.5 stars. Make sure to get the VIP tickets, which get you a special preview to meet the characters in advance of the show, a seat at the seance table, and a bag of goodies to take home with you!