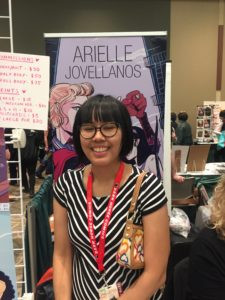 Visiting booths at the expansive Boston Comic Con, I encountered Arielle Jovellanos, a comic artist and illustrator from New York who travels the country and will next be seen at New York Comic Con in October. She kindly agreed to an interview.

Events INSIDER: Your work is striking. How do you explain it to people who haven’t heard of you before?

Events INSIDER: Have you worked on a comic book that readers might know?

Arielle Jovellanos: Yeah. I worked profusely on an anthology called Fresh Romance, which is published under Oni Press now and then I did a short story for the Jem and the Holograms comic for IDW.

Events INSIDER: What makes you different than other comic artists? What’s your niche or your specialty?

Arielle Jovellanos: I love delving into the character of not only [the personality] but the character of clothing or just those little specificities that really create small stories within a larger narrative.

Events INSIDER: Artistic details that ground a story and make it more real?

Arielle Jovellanos: Yeah. I think it also honestly makes it a lot more fun for me as the artist too. In comics and whenever I have to draw a crowd scene, I love drawing my friends and stuff inside the background because it’s just lived-in details like that. Whenever I have a character who has a bookshelf, I love thinking of that. “What would that character be reading or what would be in that character’s room or how messy would this character be?” I think little details like that really make it fun for me. Events INSIDER: How can fans find you?

Events INSIDER: What’s something that would make readers think, “Wow! I’ve got to check out this profoundly grounded, amazing comic book artist.”?

Arielle Jovellanos: I just got into this awesome art residency program in San Francisco where they’re basically paying me for nine months to just work on my own comic and really get the time to just delve into my own stories and I’m really excited about it and everyone else should be too because it’s gonna be really cute and girly and pink and beautiful.