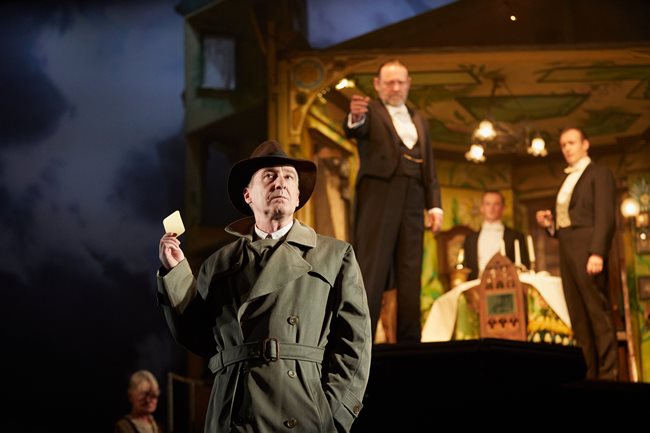 Set in 1912, An Inspector Calls is an evening of intrigue about a wealthy family and the death of a young woman, Eva Smith. Reading “Inspector” in its title, and “classic thriller” and “investigation” in its description, you might assume that the play is a murder mystery. It is actually a surreal morality play. Written in 1945 and performed on Broadway and for six years in London’s West End, the play’s version in 1994 won a Tony award for Best Revival of a Play.

The most striking aspect of the play is its set design, by Ian MacNeil. The set uses foreshortening, the placement of small objects in the background, as though they are on the horizon, to make the stage seem far deeper than it really is. Thus the stage appears to be a long British street with cobblestones, a phone booth, and an entire house! The play starts with fog and rain effects, signaling a spooky evening. Unfortunately, the set is often not put to effective use. For example, the first scene with dialogue takes place inside the house, whose limited windows gives the audience very little view as to what is happening. This makes sense if we’re pretending it’s a radio show. The opening scene of the play has a child turning on a radio (which did not exist in 1912), which is surely a reference to the 1950 BBC radio production of An Inspector Calls. This notion that the entire play is somehow a radio play negatively affected the blocking and staging of the show. It was confusing to the audience not to see the actors just when we’re being introduced to them, while extras on the street outside distracted us rather than keeping still so that we knew where our focus should go.

The house eventually opens like a clam shell, a wonder of staging, showing a marvelous dining room with floral print wallpaper and dark wood table, chairs, and clock. Its foreshortening creates a cramped space for an entire scene, and when the characters do emerge onto the street, at times they seem to represent standing indoors, and at times represent standing outdoors. In a play with no street chase, or reference to the street, one wonders what dramatic purpose the elaborate street scene is meant to convey, and why it was given such a prominent place in the staging.

One explanation is that, at one point in the play, the villains of the mystery are shamed by the glare of the public. A crowd of 15 extras are brought onto stage as villagers, who stand silently, doing and saying nothing. How the villagers were drawn and why they say nothing is not explained; it simply happens. So I guess we need to set the entire play on the street so that these villagers can show up towards the end. (Another way to do it would have been to have the stage given to an all-indoor setting, with the staring crowd added as a video projection above the set, or with villagers appearing in the windows, or even coming into the house.)

Another strange choice for staging has the inspector standing far apart from the suspects he is questioning. At one point, he even retreats off the stage into the audience’s box seating. This has two negative effects. First, it’s not scary to be chastened by an authority figure who is 50 feet away. This is no in-your-face, Al Pachino confrontation. Second, although the actors wore microphones, they raised their voices to each other to cross that wide distance. Shouting, as I have often commented on plays that use no microphones, reduces an actor’s ability to emote.

Although we expect a stage play to be loaded with dialogue, a third problem with staging is that it was too static. Characters mainly stood in place and spoke with each other, instead of moving about. While the plot was clear enough, the play does not perform well as either a morality play or as a thriller.

As a thriller, the play is undercut by odd moments of comedy. It’s typical for a play to reach a great height of tension, and then to let go of that tension, perhaps with some comedy, so that it can be built up again. The comedy in An Inspector Calls instead seemed like pinpoints at the wrong moments, rather than crafted into a big picture ebb and flow. Without spoiling the plot, I can say that the play’s events are ordinary. It needs a mountain of malice added to the script and the acting. The actors are somewhat cruel, but not evil in a way that would make it fun to hate them. The inspector is soft-spoken rather than frightening. Nothing macabre happens like the head of a corpse going missing. The mystery has few puzzles to solve, like a room locked from the inside that no one could possibly have gotten into. Instead, the characters mainly just tell the truth about their misdeeds with a minimum of coaxing.

The play gets right to business with the plot of the mystery, so that we don’t get to know the inspector or the suspects well. Why should we care about these characters? The men are dressed for dinner in identical tuxedos (by costume supervisor Caroline McCall) making it hard to tell them apart. The plot itself has unnecessary coincidences that spoil suspension of disbelief, and while they are eventually explained, it’s a bit like an audience fake-out rather than a satisfying resolution. If the first 80% of your play seems full of unlikely happenings, then 80% of the audience’s experience is undermined, even if the coincidences are eventually explained. Let’s speak directly to the audience about the horrors of class warfare, while the public shames us

As a morality play, An Inspector Calls is also problematic. You’ve heard the phrase “show, don’t tell”. It’s more compelling to show the action, for example the past vignettes in A Christmas Carol, rather than only hear about what happens. In An Inspector Calls, we never meet the victim or see the horrible deeds played out. (This also prevents crystal clarity about what actually happened.) Instead the rich who oppressed her simply talk about it from their perspective. It reminds me of the film The Blind Side, which is about the struggles of black Americans, with most of the screen time given to white people. Productions can and should modify a script when needed; it dates the play when the victim, a 24-year-old woman, is mainly referred to as “the girl”.

In Les Miserables, the main character loses her hair, sells her teeth, and turns to prostitution to try to keep her daughter. In An Inspector Calls, the acts of cruelty are too modest to evoke emotion, and the actions of the rich are only indirectly connected to a tragic outcome. Still, the rich characters break down into sobs of remorse. (Later, they just as suddenly give up the remorse.) The play then preaches heavily morality. It runs thirty minutes past when the mystery is solved, so that characters can wail and their mansion literally explodes (Here I am using the word literally literally. The house explodes and collapses onto the set, a magnificent visual but one that ironically shows how forced the play’s lessons are.) The actors make pronouncements like “There are millions of Eva Smiths!” The play has no intermission and the rows of seating are uncomfortably close if you are tall. We saw two people near us leave early.

You may love this play, if you come to it with the attitude, “This is a throwback to the 1940s, an Orwellian tale and character study that assumes rather than shows you class struggle.” It’s surreal and has powerful visuals. However, to me, its morality flagellates the audience to little emotional result, and as a thriller its tension is undercut by the staging, acting, the structure of the plot, the big twist at the end, and the play’s main direction which is not to be a thriller.

It’s always a challenge to write a negative review, and I take no pleasure it in like some snarky art critics. I’ll give An Inspector Calls 3 stars only, but hope that I have supported my reasons well and shown empathy. Of course the actors, knowing that they are about to moan with remorse, can’t play up their evilness to make the play more of a fun conflict. I get it. This is a difficult play to produce and I applaud the creative risks taken with the amazing set design.

See An Inspector Calls on the Cutler Majestic Theatre website.