The Humans at the Boch Center in Boston (5 stars) 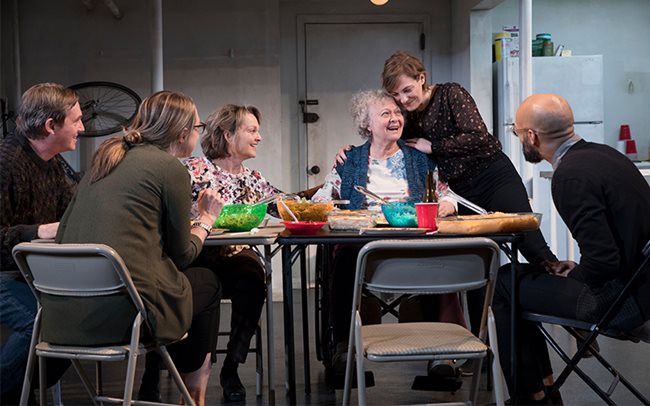 Upon sitting in the Boch Center in preparation to see The Humans you are welcomed to a bleak eyesore of a set that consists of a typical urban apartment that is well past it’s prime.  The walls all are all painted a faded eggshell white.  There is plastic over one window and an old air-conditioning unit at it’s base.  The furniture is bare, a second hand recliner is all that the top floors holds while the downstairs kitchen has only folding chairs and a card table.  Welcome to the reality of Brigid Burke (Daisey Eagan), who invites her parents and grandmother over to her New York Apartment for Thanksgiving.

Erik Blake (Richard Thomas) and his wife Deidre (Pamela Reed) bring their mother Fiona “Momo”(Lauren Klein)  to their daughters place for a Thanksgiving dinner.  Joining them is Aimee (Theresa Plaehn), Brigid’s sister and Richard Saad (Luis Vega).  We have all the workings of a family drama that many Americans can relate too.  Who hasn’t exchanged some regrettable words at the dinner table when at a family gathering?

But the drama is much more.  The Humans greatly captures the relationship between Baby Boomers and Millennials and how their values and habits diverge.  At one point Diedre talks about how much she likes cruises because everything is taken care of while Richard asks if they make an attempt to avoid tourist areas.  Nothing divides the generations such as a Boomers need for security juxtaposed against a Millenials desire for novelty and authentic experiences.  Erik at one point says he has had the same job for 28 years while Richards states it’s rare for his generation to keep a job for more than one.

This tension between generations drives much of the plot and leads to a very dark place both literally and figuratively.  We are constantly reminded that doom is coming by the noisy neighbors making a racket as if some alien monster might invade.  It seems everyone has a dark secret and as they are revealed, so too does the scene get dark.  Light bulbs go out as the antique apartment starts to burn out the lights.  As is typical of the stereotype, the millennials didn’t plan for the future and have no extra bulbs.  The Boomers however have a battery powered lantern they brought in a care package.  The need for security trumps the need for an authentic experience. This play with light and dark directly oversees the dark secrets that each family member deals with in the real world.  As we look at each character we see their future is not certain and that what they expected is very different from what life threw at them.  We have a sister Aimee who seemingly lost everything, her job, her relationship and now her health.   Aimee faces a real future of health problems that may leave her without love and without hope.  Brigid can barely find a job most likely because she “followed her passion” in a crowded field that rewards a few superlatives.  Boomers loved to tell young kids they can be anything they want and then enjoyed watching as idealistic young adults realize they can’t.  Richard is still a student at the age of 38 as if that staves of the real world for him.  But since he will shortly inherit a trust fund, he can avoid reality as much as he wants.  The father Erik reveals he has dreams of a faceless women, who portends his dark future as the climax of the story is in near total darkness.

The shining gem of this production is Momo, the grandmother of the sisters who is suffering from dementia.  She can barely speak with only mumbles and is often confused and paranoid.  Erik and Deidre are dismissive of her at times and other times scared when she briefly disappears.  The tension about the future is embodied in this senior citizen whose mind has given up long after he body remains.  Truly, she is in the dark and unable to come out of it.  The performance given here is stupendous as the actress remains in character the entire show and never seems forced or fake.

The Humans holds up to the awards it has been granted which include multiple Tony awards.  It can be compared to such classic dramas as  A Long Days Journey into Night or Death of a Salesman but with a modern audience in mind.  This is a play to see with your parents and even your grandparents and so few productions bridge generations like this.

The Humans written by Stephan Karam and directed by Joe Mantello will be playing at the Boch Center in Boston between March 13th and the 25th. See http://www.bochcenter.org/thehumans.