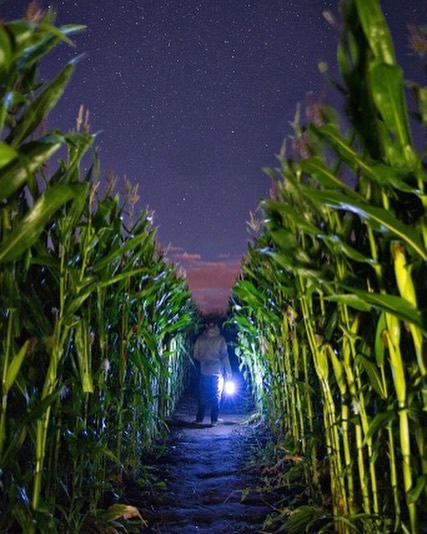 The Beans & Greens Farm, in New Hampshire on the drive up to the White Mountains, is open to the public during the daytime for hayrides, barnyard animals you can feed, and a corn field maze. They also have an extensive farm store selling homemade ice cream, tiny pumpkins, maple syrup, barbecue sauce, corn relish, cookies and pastries, chips, egg salad, chicken wings, honey, apples, and more.

At night, they turn their corn maze into a Halloween attraction, which they call the Spooky Nightmaze, Haunted Nighttime Adventures, or just the Nighttime Cornmaze. Note: they ask you to reserve your tickets online in advance, to avoid crowding.

The best thing about their location is bonding with nature. Beans & Greens Farm is far enough from city lights that you get a stunning view of the nighttime sky and stars. You’ll definitely want to go on a night that’s not cloudy. Just being outdoors at night, on a stroll through a corn field, is a beautiful experience. 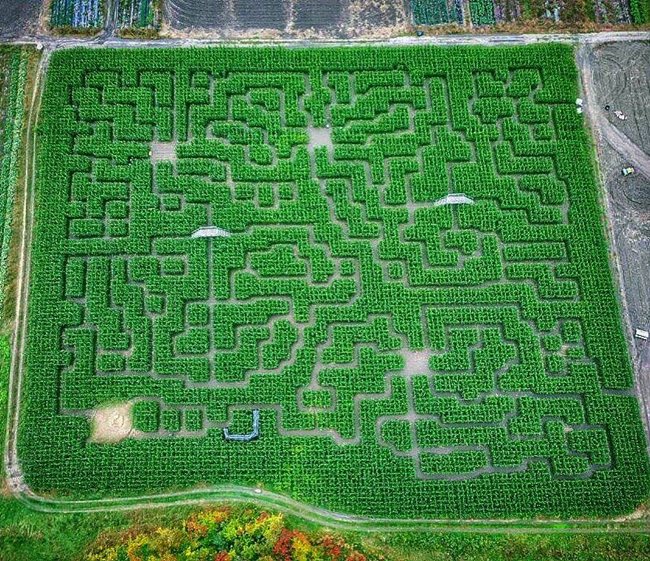 You begin at the farm store, where tickets are sold, and then outside walk a path with some carved and lit pumpkins. Then cross the street an it’s a 5-minute walk to actually get to the corn maze. (During the daytime, they have hayrides that take you back and forth.) Pro tip: you’ll need good shoes, or ideally boots, especially if it’s recently rained, in any corn maze.

Then it takes guests about an hour to go through the maze, while actors in the maze jump out to scare you. They don’t give out maps of the maze, but in my experience, a corn maze map is impossible to follow, especially at night. Your best bet is to orient yourself using whatever you can see, and just try not to backtrack. As long as you don’t go backwards, you’ll eventually get out of the maze. You can peer over the 8-foot-tall corn stalks as best you can looking for reference points, or use your GPS, or use whatever view you get from the bridges, or guide yourself by whatever props and notable locations are in the maze. Recognizing and remembering notable locations is the key to corn mazes. 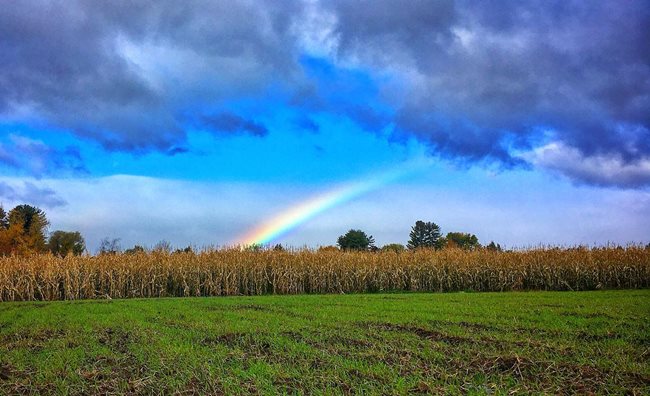 The maze is perhaps 4 acres and they claim it’s one of the most challenging in New Hampshire. Certainly their addition of two bridges makes the maze more of a 3D topology, so that you can’t just rely on following the wall to exit! I don’t know that the more challenging a maze is means that it’s more fun, and for me a 90-minute maze is just too much dang walking. But the 60 minutes at Beans and Greens Farm is just about perfect, and I didn’t meet anyone in the maze who seemed frustrated, and I did witness the actors giving hints to guests who asked for navigational help. So the maze seems the perfect combination of challenging but not overly challenging. 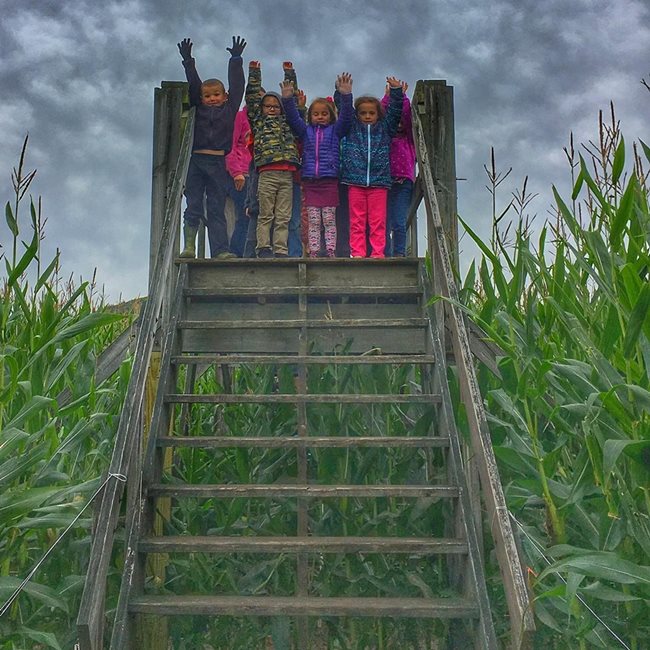 The actors showed good energy, jumping out to startle and scare us, including a guy with a fake chainsaw. However, they wore mainly masks and thrift store clothing and didn’t have lines to say, which would have created theatrical, more compelling scenes. There were no props or decorations in the maze, at least that I could see at night, and no special effects such as fog or special lighting. So from a theatrical perspective, it was a bit of a disappointment. One area was a “tunnel” made from plastic sheeting that was fun to walk through for a few seconds. Delightfully, in another area they have a table where staff sell donuts and hot drinks. Thankfully, there’s no music in the corn maze, so that guests can call out to one another and better bond with the nighttime and nature. 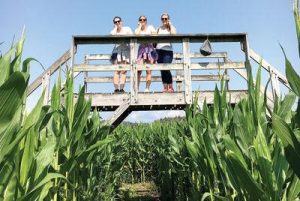 The corn maze paths were free from rocks and depressions that would create stumbling hazards, except in a central area with a circular mound of dirt, where you have to watch your step, and as you’re climbing up and down the stairs of the two bridges. They ask guests not to bring flashlights, so they don’t ruin the surprise of actors jumping out, but those areas should have some lighting for safety, even if it’s just dim LED string lights or glow sticks. The long field path that takes you to and from the corn maze does have some lighting, but it’s not quite enough for guests to see a few ruts in the road where you could lose your footing. I stepped in a puddle in the parking lot. Twice I heard an echoing boom in the distance. What was that, hunters firing a gun? It seemed too far away to be a Halloween special effect.

There’s nothing fancy about the Beans and Greens Spooky Nightmaze, which doesn’t even have a clear name or dedicated page on their website. Actors startling you, and only perhaps a dozen of them, is the most basic type of Halloween thrill, and there are essentially no decorations. But what’s wrong with simplicity, if it works? I keep telling more built-up Halloween attractions not to load up their forest pathways with scrapyard junk and filler. Just keep it natural! It’s naturally scary at night in the woods or in a corn maze!

Because they do have scary actors, Beans & Green Farm Nighttime Corn Maze is more than just a corn maze that happens to be open at night — it is a genuine Halloween attraction. An hour’s walk is a longer experience and with less waiting in line than you would get elsewhere, it’s a pleasant stroll, and the farm store is open late, giving you and your friends a place to chat for a few minutes after you are finished. (Even better would be a bonfire with seating, or if the hayride or animal petting were open at night.) There’s such natural beauty and spookiness to a nighttime walk through rows of corn, that maybe it doesn’t need special effects and theatrical costuming. I’ll give 4 stars to the Beans and Greens Nighttime Cornmaze.