The Harriet Tubman House Wows with Tales and History (4.5 stars) 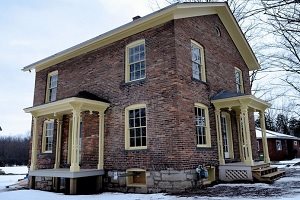 Believe me, as someone who’s been reviewing destinations for 13 years, I know that historic home tours can be boring. (I’m thinking of the home of former US President John Adams, for example, in Quincy Massachusetts.) But wow! The Harriet Tubman home, museum, and tour take you into the sensational, educational, and relatable. If you’re not too sure who Harriet Tubman was, you may have heard her name in the news two years ago, when there was a push to put her on the $20 bill. That’s because she was born a slave in the mid-1800s, escaped, and became a conductor on the Underground Railroad, helping enslaved African-Americans journey to the northeastern states or to Canada. They had to walk the entire passage, knowing that just being spotted as a black person could get you re-enslaved.

During the Civil War, Harriet Tubman was a spy, and then became the first woman in US history to led a military expedition, to raid rice plantations. Then after the Civil War she promoted women’s rights, raised money to educate African-Americans, and opened a home for the elderly. She did it all even though she could not read or write, and suffered a head injury in her childhood bad enough to give her epileptic seizures and headaches throughout her life.

This is not the official design for the $20 Harriet Tubman Bill, but I think it is dope.

It just so happens that her former home, where she lived until she died in 1913, now has a grounds tour and museum in Auburn, New York, near Syracuse. Tours are free, though donations are welcome, so we went. Check the schedule in advance, because tours happen only at specific times. While waiting for the tour, you explore a museum that is small but well curated. They had a few T-shirts and sweatshirts inside to purchase, but not a real gift shop. The bathrooms were acceptable, and they had a water fountain.

Our guide was Rufi, who comes down seasonally to host tourists. Like Harriet Tubman, he comes from Ghana. It was hard at times to understand his thick accent, but his energy was infectious and his jokes made us laugh. For example, he told us that some tourists, coming to learn about the Underground Railroad, actually expect to go underground! We learned a lot, too. Although much of the tour makes you think, “Damn! White people are the worst!”, the tour itself was very inclusive, not preachy or screechy. Rufi did not shy away from painful truths, but he was so measured and grounded in his statements that none of it dangled unsupported. As a 40-something white guy who’s not always hip to what’s lit, I found the tour both fascinating and accessible. Trust me, even if you don’t normally like learning about history, this is a good one worth your attention. Rufi put the story of Harriet Tubman’s life in context with history, so that we didn’t feel lost. It was very engaging. He didn’t just spit off a bunch of dates, and didn’t focus on unimportant nuances. Instead, he connected its importance to what we experience today. For example, I asked a question that related the prejudice of the past to the current debate on immigration. He said we could see the repercussions of history today in the current Black Lives Matter movement, which protests people calling the police to report black teens doing nothing, and police behavior towards African-Americans. Rufi made the tour interactive, asking questions of the audience. At first we were hesitant to speak up, but he asked everyone in the audience where they were from, and after a little audience interaction, towards the end a lot of people felt comfortable speaking up. We learned about the time period and movement as a whole, not just about one person, and didn’t glorify her beyond her actual accomplishments. Harriet Tubman didn’t create the Underground Railroad, and he tied in the other people who helped her.

Unfortunately, the main house isn’t there anymore, but we walked around the property and we saw where some things were, and they do have a couple of houses that are still there, such as the original Home for the Elderly. They managed to renovate and to expand out the property, to make it a nicer to visit, but it’s a work in progress, and their restoration does not seem fully funded. (If you’re in Georgia, the Harriet Tubman Museum there is the largest African-American museum in the US South.)

Without much to see, but with a fantastic tour and a good if small museum, it’s a 4-star attraction, make it 4.5 stars because of the importance of the topic. It’s worth a stop on your way to and from Western New York.