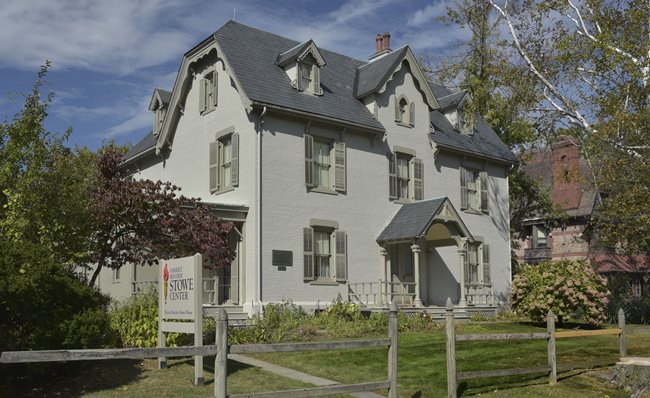 Harriet Beecher Stowe was the 19th century author who wrote Uncle Tom’s Cabin, which helped spark the Civil War and free the slaves, and these days is referred to in commentary on social justice and black accommodation to loss of privilege. Her historic home in Hartford, Connecticut, is on the same campus as the Mark Twain House and Museum, and you can go for a tour.

Chelsea was our tour guide. The tour begins in the visitors’ center, which has a small gift shop. Chelsea spoke animatedly about other books relating to social justice and the African-American experience, and engaged us in an interactive conversation. I’ve been on many tours where the pause to ask for questions is rhetorical, but Chelsea gave us long pauses to allow us the time to think and courage to speak up. This continued throughout the tour, leading into the many rooms of the Stowe House. Modern museum curation relates the historic home to the past and present.

The tour’s main focus is context. As an events writer for 13 years, I’ve been on many historic home tours, which usually get things backwards. First, visitors want to appreciate the importance of the historic person. Only then do we care about the bathtub, the names of the kids, and the dates of their vacations. The Stowe Center tour gets it right. We do learn about Harriet Beecher Stowe, but much more about the history of slavery. The home is partly natural — the original rooms — and partly curated exhibits, which at every turn connect the distant past to the more recent past and today. This makes the tour very accessible. We were shocked by how black people have been portrayed as caricatures in illustrations, movies, and even dolls. Thankfully, there are plenty of places to sit on the tour, and — unlike the Harriett Tubman House tour in New York — many of the home’s artworks and furniture on display were actually owned by its famous resident. We’re given a few items that we can personally handle. The house is well designed as a museum, including mood music in the piano room, and our host could answer any question about the past. The tone isn’t preachy and angry about injustice, but instead well supported and well thought out. They’re also open about Uncle Tom’s Cabin being controversial, with “being an Uncle Tom” these days used as an insult to a minority person who is too happy being the target of repression or prejudice. Stowe in her own lifetime received negative feedback with humility, we learned.

The tour is 75 minutes, and they do a marathon reading of Uncle Tom’s Cabin in March, a birthday celebration in June, their big annual literary prize event in September, and a spiritualism tour in October (which hopefully isn’t anti-scientific, urging visitors to actually believe in nutso ghost stuff.)

The tour felt intimate and unrushed. Towards the end you can write a comment on a paper tablecloth. It’s only a historic home, not the Lincoln Memorial in Washington DC, but Harriett Beecher Stowe was an important voice in history, and the tour does more than relate the facts — it has itself become an important voice educating visitors on social justice issues of yesterday and today. The neighboring Mark Twain House and Museum has a better known author, and its museum has bigger spaces for exhibits and events, but we were more inspired ourselves to change the world on the tour at the Harriett Beecher Stowe Center. Think about it. If we are not to be inspired by a historic home tour, what really is the point of it?

I’ll give the Harriett Beecher Stowe Center a must-see 5 stars. It shared location with the Mark Twain House is my favorite destination in Hartford, Connecticut.