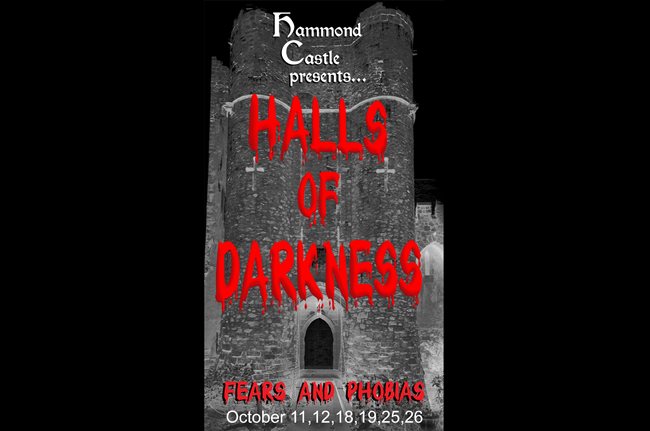 Hammond Castle Museum is a European style castle that was built in the 1920s on Boston’s North Shore, by a scientist and inventor who earned 417 patents. Seated on a ledge above the ocean shore, now it’s a non-profit museum that showcases his inventions and often hosts weddings and festivals. In October, they turn it into a Halloween attraction, Halls of Darkness, which is a charity event to benefit the museum.

You arrive at satellite parking and are taken by bus to the castle, which is a stunning sight. It really is a castle with stone walls and turrets! Out front they sell kettle corn, apple cider, water, and soda.

To get in line, take the stairs to the left, which descend to an overlook where you can see the ocean. Then continue down to the small ‘back yard’ of the castle. While you’re waiting in line, admire the views. At night Hammond Castle is naturally eerie, with its stone walls and ivy. There is no better venue for Halloween than this naturally spooky old castle. The ocean is to the other side. The evening I went happened to be high tide, so we could see and hear the waves crashing against the rocks below. They had two outdoor toilets. Pro tip: there are a couple of chairs across from where you descended, near the entrance, if you wish to sit.

The attraction is an 11-minute walk around the outside and then through the inside of the castle. Because it’s a real museum, the stairs are well lit, and you must work your way around the exhibits. Each group that goes through gets two staff, one to lead from the front the other behind the group. Kindly, they told us explicitly that if we got too scared, we could ask to leave.

The tour begins outdoors with a pleasant walk along the side of the stone castle walls, up a stone stairwell. You pass a Halloween cemetery outdoors and then cross a wooden drawbridge over a dry moat with statues of lions on either side, to enter the castle.

Hammond Castle has no animatronics or special effects, and the decoration is largely amateur, as you can expect at most charity Halloween destinations. For example, you’ll find a lot of that stretchy cotton you can get at Target that is supposed to look like spider webs. There’s a clown’s “fun house” that’s just painted plywood and blacklights. One banquet setting is just a sheet over a table with a banquet pig, and other room had buckets of entrails — interesting but not theatrically set up. The theme this year is “Fears and Phobias”, but that was not made explicit and our guides did not speak with us.

However, the setting itself creates a marvelous effect. You’ll walk past a beautiful indoor pool with spooky blue lighting. There’s a crypt, a stonework basement corridor lit with blacklights. You’ll pass stained glass windows and a gigantic pipe organ, the largest installed in a residence in the Western Hemisphere.

Some of the actors had impressive costumes and makeup, such as Chuckles the Clown and the Goat Devil King. The rest of the crew had interesting masks but were otherwise just dressed in black cloaks or thrift store clothing with blood spatters. Although most of the actors just jumped out to startle us, some had real lines to say, playing out a 5-second vignette. Kudos to the actor who jumped from a height onto the floor to startle us! (Don’t get flat feet from all that pounding.)

Hammond Castle Museum is beyond fantastic as a Halloween venue, but as I often got on my report cards in grade school, Halls of Darkness is not living us to this potential yet. Other destinations place staff all throughout the venue to watch over guests, instead of sending groups in with guards at front and back. This would reduce the size of the groups and reduce waiting in line. The amazing venue is aching for a grant proposal or business plan to properly fund spooky props and interior decoration.

It’s a beautiful venue with a few good costumes and theatrical scenes, but with mainly filler and amateur decorations and costuming. That’s plenty to recommend it, since it’s a good cause, but at 11 minutes and with only satellite parking, it’s just too short for a top rating.