Wild Magic at the Greg Frewin Magic Theater Has World-Class Illusions, and You Can Pet a Tiger, Too (5 stars) 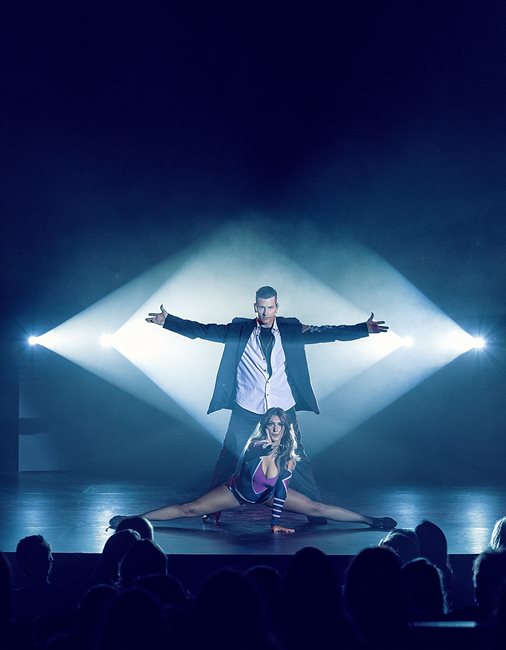 Greg Frewin is a magician who has performed around the world, won first place at the International Brotherhood of Magicians competition of professional magicians, and has appeared on television with Penn & Teller. He runs a theatre space in Niagara Falls, Ontario, on the Canadian side of the border from New York., which hosts performances, mostly tribute bands targeted at older folk, and his long-running magic show. You’ll see tigers, people who disappear, card tricks, and more! The venue is set up with tables so that you can order drinks or food. Come beforehand for the dinner show, choosing from buffet of salads, baked pasta, mixed vegetables, and white fish, chicken, or pork, which we didn’t do. Or just order during the show from a movie theatre type menu — a waiter or waitress will come to your table. They put a real lit candle on the table. Out in the lobby, they have a small gift shop, a parrot exhibit, and you can order drinks there, too. The show is 90 minutes, including an intermission, and there is no opening act except a video.

I have reviewed several magic shows and like to think I know some of the tricks, but I did not do more than take guesses about the how the illusions were pulled off. They are that good. (Hint: when they play music, the beat of the music can be used to coordinate people and mechanisms.) Most of the acts involved magically appearing and disappearing women, perhaps too much so, but with unique props. Greg Frewin, I have learned, designed a lot of his own magic equipment, and they brought out some attractive and over-the-top stage pieces as part of the show. The acts are genuinely astonishing, even for a jaded guy like me who has seen too many magic shows. I get that you can hide one woman in a table, but hiding three women in a table and producing a tiger is pretty great, I have to say! Wow!

Greg Frewin seems in-between. The elaborate video they play before the show builds him up in the same way that David Copperfield’s video does. It’s too much bragging and raucous rock music for me, but that is the Las Vegas style, I suppose, to go big big big. However, there were plenty of moments where Greg Frewin interacts with the audience with humility and warmly, person-to-person, so I sense that he’s a good guy who doesn’t take himself so seriously. Let’s call it 30% god and 70% friend. There is some self-deprecating humor in the show and I was glad that he thanked and named the dancers individually — they do a lot of the work when they’re stuffing themselves into tables or whatever the heck is happening in this show! In addition to the disappearing acts, there are a couple of card tricks, and he even shows the audience how to do a trick, before (and you knew this was coming), bringing a kid up on stage and giving away a magic book that is available for sale in the lobby. But the sell is low key, not annoying.

I’ve been to entire magic acts that don’t require much manual dexterity, for example you think of a celebrity and the magician guesses who it is. Well, the Greg Frewin Magic Show is loaded with skilled manipulations and ingenious contraptions. I really want to know how it all works! Of course, I don’t want it spoiled, so I don’t want to know how it all works. I’m so curious, though. It’s not just an entertaining show but one that shows sophistication and talent. How do they do that thing where Greg disappears from stage and is suddenly sitting in the audience? I’m pretty sure they use lasers and quantum tunneling.

One nitpick, I don’t know that Greg Frewin displays his own unique style. The show is a Las Vegas style glitz and glamour show. You know, the women have to wear skimpy clothing, and the 80s-style guitar riffs seem targeted towards 50-somethings, but of course the audience was also filled with excited kids. Still, the tricks did not look purchased, but rather conceived and created in-house. Offerings during the show include fried foods, ice cream, and toffee pudding, which must be something Canadian. They’ve got bottled drinks, chocolate bars, slushies, popcorn, candy, or an entire pitcher of soda, which they call pop. This is not healthy or even hearty restaurant type food. You can get garlic bread or potato skins or nachos, and of course you can get beer and wine.

Greg Frewin seems to have a warm and direct relationship with the tigers, as shown in his videos. The tigers are impressive, and don’t seem dangerous the way that he holds them by chains linked to their collars. There’s a VIP experience where you can go backstage, meet Greg Frewin, and pet a tiger briefly, and there’s also an illusion where (thanks to a separating mirror or something) you seem to walk into a cage with a tiger right there. So you can do that and get your photo taken. They’ve also got an experience where you go up on stage, and, thanks to an illusion, you appear to walk right into a cage with a tiger. They claim that the profits go towards the caretaking of the tigers. Of course you should check out their full calendar of other shows. You can rent the theatre for private events, get a special rate for a large group, host your birthday party or teambuilding experience there, or work with them to fundraise for your charity. I couldn’t find the calendar, but Greg Frewin also tours with his act and may come to your area.

Greg Frewin’s website calls him The International Grand Champion of Magic, his having won every major award in magic. The quality and charm of his show supports that claim. A full 5 stars for the Greg Frewin Magic Theatre.