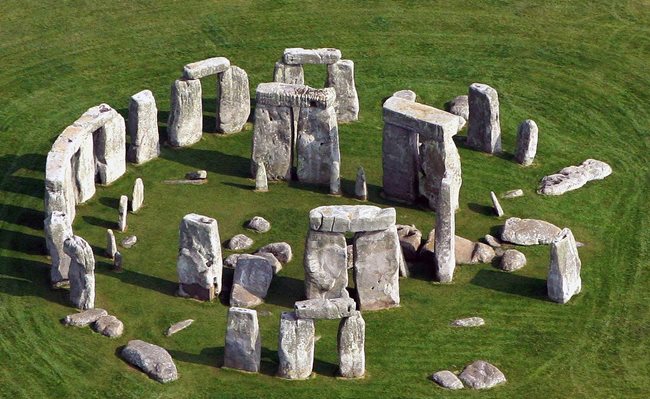 When visiting the United Kingdom, going to Stonehenge is a must. It’s the circle of giant standing stones erected some 4,000+ years ago, 2 hours’ drive west of London. They have a modern visitors center with an award-winning design, and it’s a treat to walk around the paths, but a bit disappointing that you can’t get right up close. Stonehenge Tours is the tour agency that will get you right inside the circle!

The inside tours only take place at dawn and sundown, when the visitors center is closed and regular guests are gone. The limit the size of the groups, I believe, so they can keep watch on everyone, and to limit the damage done by everyone passing through. The day that we visited at sunset, only some 28 tourists joined us, from a few different tour agencies. Your private tour can pick you up nearby Salisbury, all the way from London, or elsewhere, and Stonehenge Tours can give you a whole day of archaeology and history touring, going for example to the Roman baths, Shakespeare’s birthplace, or the secondary ancient sites like Stonehenge. As for us, by special arrangement and because of time limitations, we drove directly to Stonehenge, were admitted by a guard, and met our tour group there, behind the closed visitors center.

Before the tour, our guide Nick educated us on the history. Nick was fun and high energy. He understood that, even at Stonehenge, tourists can be so weary from travel that they need a pick-me-up. He appeared to know everything — and I mean everything! — about Stonehenge and the surrounding lesser ancient monuments. We learned about the ancient people and their huts, tools, and methods of hunting. They made sharp stone tools by “knapping”, a clever way to knock rocks together until they break and flake in sharp pieces. Then you board a bus and get driven up to the Stonehenge circle itself. Make a mad dash and you can arrive first and get pristine photos and video, as though you are the sole people on the entire site. But we found that with some clever positioning, we could get shots the entire time when the other tourists were hidden behind stones. Courteously, Nick took us outside the circle for some more history, whereas other tour groups stood in the center — right where we didn’t want them for our photos. The guards will move out of the way if you ask them politely. This is an actual photo from our inside the circle tour with Stonehenge Tours. You really can get some peace and pretend you are entirely alone there.

The best way to appreciate Stonehenge is simply to silently meditate and to observe it, but you will be seized by the madness of taking too many photos. And also, of course, your tour guide will be speaking nonstop. Truly, we did appreciate Nick and were so eager to learn, but at some point we politely excused ourselves so we could just take in the site on our own, getting a personal moment to contemplate the past.

It’s remarkable. You do feel a connection with the past. On one of the stones is carved the name Christopher Wren, the distinguished 17th century architect who rebuilt London after the fire of 1666. Even to Christopher Wren, this place was ancient. The stones have moss, and some of the stones have fallen. We learned all about the history, what the stone circles were used for, that they’re a calendar. We also learned about the festivals that are held at Stonehenge, for example on the summer solstice, and the people that have come here over time, the processions and rituals.

We did force ourselves to put away our cameras, and carve out a few moments of genuine tranquility. Inside the circle is transformative experience, far more than simply viewing the stones from afar. Because the era of written human history in the United Kingdom began only in AD 43, the year the Romans started their conquest of Britain, these monoliths come from an unknown era, a ghost of as remote a human people as there can be. (That being said, we learned a lot about how archeologists using shovels and sonar are exploring the surrounding miles, which also hold ancient consructions and other secrets.) You feel a sense of bonding with the stones, as though touching the first humans. Stonehenge is the second oldest set of stone monuments. You’d need to go to Turkey or Africa to get relics from further back in time.

Once you’re inside the Stonehenge circle, you really can just do your own thing. You’re not allowed to touch the stones, because human hands have oils, and of course they watch to make sure you don’t try to carve off a sample or something insane, but the presence of the guards and the rules are far from imposing. If you want to listen to the tour guide you can do that, or if you want to break way and take pictures just enjoy a romantic time, you were able to do that too. We were glad to have not just such a knowledgeable, but a cool guide in Nick, although when he confided in his belief in superstitions and got out a divining stick, an unscientific way of sensing the world like a Ouija board, it was too much for us.

Being at Stonehenge at sunset was romantic, and the limited number of tourists gave us a chance to pause and take it all in. That’s an easy 5 stars plus for Stonehenge Tours! You will need to plan in advance to grab these limited tickets, which are not expensive at 99 pounds. Also, each tour group seems to be granted different days of the month, so although I recommend you start with the Stonehenge Tours calendar, if you need a day that’s unavailable, just three or four other tour groups also give tours. (Nobody bonds with Stonehenge like Nick, though.)

If you just can’t make it inside Stonehenge, rent a car and you’ll find there are many secondary ancient stones, dirt mounds, and other past constructions, including hills where the ancients carved out giant white horses. Nearby Stonehenge, I recommend Woodhenge & Durrington Walls, Silbury Hill, West Kennet Long Barrow, Avebury Stone Circle, one of several White Horse locations, Cley Hill, and you’ll find more online. These sites are open all day, every day, and they’re free to visit. But they’re not that well curated, so go online to learn the most. Start at the Avebury Stone Circle, which has a visitors center, a garden, an old manor and stables, with nearby shops and restaurants. That’s something great to do while waiting for your sunset tour with Stonehenge Tours.