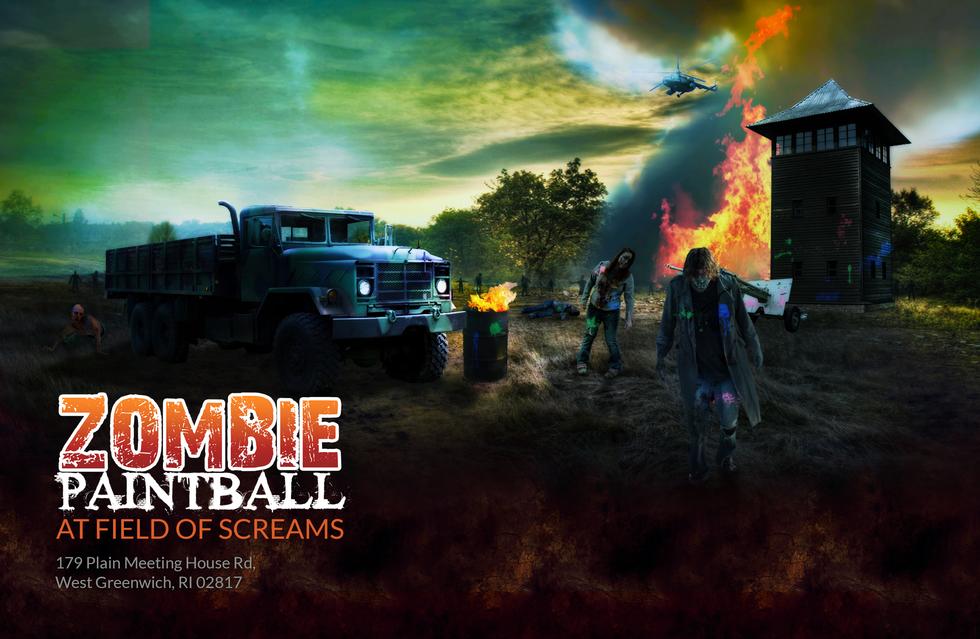 Field of Screams is a Halloween attraction at Big John Leyden’s Tree Farm in Providence, Rhode Island. Like other farm attractions, they have wide open spaces and beautiful nighttime scenery, but because they grow Christmas trees instead of vegetables and animals, there’s no manure smell and no produce farm stand. They have a hay ride strung together with two indoor attractions, plus New England’s only zombie paintball experience, where you’re driven on the back of a truck through fields shooting at actors. At the entrance, they’ve got a food table selling hot dogs, nachos and cheese, chicken fingers, brownies, hot chocolate, candy bars, meatball subs, fried Oreos, french fries, and dough boys.

Start first with the paintball. Of the 250 Halloween attractions I track, I have seen other zombie paintball experiences, but they keep shutting down because nobody wants to stand in the forest getting shot by visitors all night in the cold. (I do know about one zombie shooting range in Auburn, Maine, but you shoot from a staging area, not a moving truck.) So it was a treat to experience this height of creativity and insanity!

You sit in the back of a flatbed on wheels being towed. To your left and right are rows of paintball guns mounted to the sides. (I was told that sometimes they operate only one side of the guns, so that actors aren’t split between sides.) There’s nothing better than being outdoors doing something creative at night, and you can sell the pine trees and see stars clearly in the night. A guide had us test our guns to make sure they were working, and then we drove around, seeing and shooting at static targets and at actors bundled up against the cold and the paint. Such brave people! Your tour guide shouts out the targets coming up, so that you know what you can shoot at. I was reserved with my ammunition and did not need to be, having plenty of shots left at the end. You can also pay in advance for extra paintballs, and perhaps staff should have also sold them in the middle of the trip.

The uneven ground of the farm trails makes the journey bumpy, which interferes with your aim. And a gust of wind can whip away your paintballs. But it was great fun shooting at targets. There was enough light, except in a few places, for you to see where your shots go — essential to enjoying the experience. Idiots with us on the ride deliberately took headshots at the actors, who were wearing masks and presumably goggles, but still — staff might have told us to avoid this. We don’t want to hurt anyone. I did feel a bit guilty shooting at the actors, but the farm’s owner assured us that they get “combat pay”. Some actors moved menacingly, and others seemed defeated, just standing there and taking it. A tough job. Your paintball journey goes around a loop twice, a 10-minute ride. In the attraction, you walk a dirt path seeing ordinary set design with a lot of filler, such as hanging cloth strips, netting, hanging curtains, and plywood walls. But you’ll also find a lot of homemade animatronics, a glow-in-the-dark area, some decorations with skulls, special effects including sparks and blowing air, and an interesting use of mannequins. Actors jump out to startle you, but don’t have lines to say. Part of the tour is a haunted kitchen and haunted bathroom, but you’ll also meet a creepy, mad scientist. While they don’t have fancy lighting or makeup, in places they’ve sprayed the plywood walls with foam, giving it a more sophisticated, less obviously shallow design, and you’ll find paneling with spooky skeletons. The indoor walk takes six minutes, and then continues through a woods walk of another two minutes. Walking outdoors at night anywhere is spooky, and beautiful.

Then you get in line for a 21-minute hayride, which could be the longest haunted hayride in New England. Monsters come out to entertain you while you wait, and after you climb on board. On this ride, you sit on the back of a flatbed being pulled by a tractor. You sit on the left or right, facing inwards, on real seats — there is no hay — and it was great to have real back support. Facing inwards means that you can’t see behind you, and to see directly in front of you, you have to look over the heads of the people sitting opposite. This has been a big problem at other haunted hayrides that I’ve seen. To solve this problem, innovatively, Field of Screams builds most of its hay ride scares on raised platforms! Unfortunately, they play upbeat rock music on the hay ride, which undercuts being spooked, and also detracts from simply relaxing between scares and enjoy the stars, beautiful lake, and the smell of the pine trees, and reminded me of similar issues in my last review 5 years ago. They should replace the rock music with ambient sounds or nothing. However, you’ll find plenty of animatronics, fog effects, and dioramas, including a 10-foot-tall moving demon, a 15-foot tall Santa Claus with a skeleton face, and a haunted graveyard. Sometimes actors, such as a chainsaw guy, will get onto the hayride. But in other places, actors stay on stage and scare you more psychologically. I love it when actors have real lines or act out scenes. For example, one actor operating a guillotine over a victim called out, “Do you want me to cut his head off?” We cheered for him. At another stage, spooky priests come out and shout lines to us. In another place, a wind machine is made to look like a flame thrower held by an evil maniac. There are plenty of actors on the hayride! Some sit next to visitors on the ride, ominously starting, and others yell trying to startle us.

Towards the end, we entered an outdoor tent with gargoyles and a skeleton DJ at a mixing station. Then disco lights and music start, and three monsters came out to dance for us! They wore only street clothing and masks, and it wasn’t scary, but it was a delightful high-energy performance and visual spectacle! So weird, so interesting. It might be the best haunted hayride in New England, competing with Fear on the Farm at McCray’s Farm, near Springfield. After the hayride, you are routed into a 5-minute journey through a 3D circus barn. They give 3D prism glasses that make different colors appear to pop out. Because houses have house-looking walls, not murals, it was difficult to suspend disbelief in the plywood corridors, with amateur painting and filler such as cobwebs and hanging plants. However, blowing air was a nice effect and we love the “Vortex”, a room that seems to spin around you. (Watch your step exiting.) I was glad to see a half-height squeezy hall, where the left and right walls inflate to squeeze you. The full height squeezy halls are too suffocating, and I always wonder if my face is being dragged the same plastic balloon corridor as thousands of previous guests. Then you exit into a one-minute walk through an Enchanted Forest, a field of pine trees with cement “trees” that look alive and a bit goofy, probably a Christmas thing repurposed for Halloween. Hanging cloth strips and blood on plywood don’t quite set the scene.

Finally, you end at the gift shop. They sell no produce (because they produce no produce) but you can buy Halloween masks and costumes. They could use a sitting area or carnival grounds with a bonfire, s’mores, and tire swings or other field games, to allow guests to stay another hour and just relax, as for example at nearby Connors Farm, Witch’s Woods, and Davis Mega Farm Festival.

With its unique zombie paintball, and its possibly best-of-class hayride, and with 45 minutes of scare, plus the Vortex, I would love to give Field of Screams a full 5-stars. Unfortunately the flashes of greatness are not consistent, with too much low-level set decoration. I’ll give Field of Screams an impressive 4.5 stars, which is up from 3.5 stars in my 2013 review, and I forecast 5 stars PLUS coming soon.