Escher, The World’s Best Optical Illusionist, Exhibited at the Museum of Fine Arts 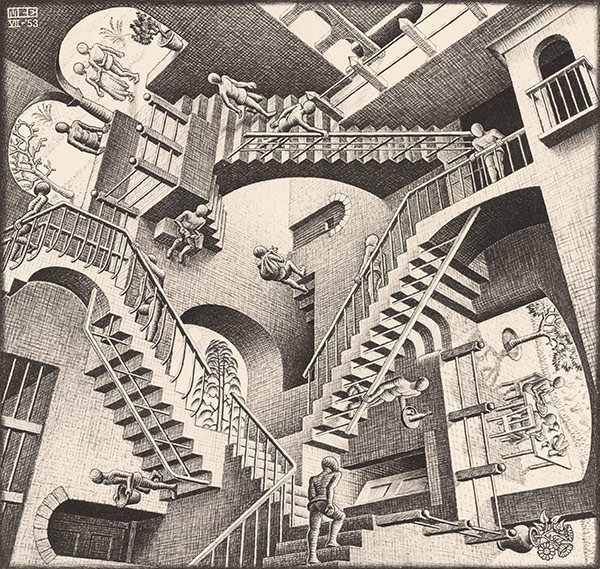 Do you like optical illusions? The Museum of Fine Arts is exhibiting perhaps the finest illusion artist, M. C. Escher., now through May 28, 2018.

Escher was a Dutch artist whose works on display are woodcuts or lithographs. His approach to art is to highlight the mathematical nature of vision. The main study of some of his pieces is perspective, where a reflection, a curve, and viewpoint lines all meeting at the horizon are showcased. At other times, he shows how irregular shapes can be formed into tiles that fit together nearly in a grid pattern. 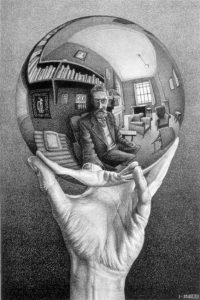 His work is whimsical, with birds, fish, and lizards transforming into one another, and with optical illusions presenting impossible scenes. It really makes you think! A stairwell staircase seems to go upwards, but as it winds around turns, you can see that its end connects with its start, which is not possible. Each portion of the illustration works on its own, but taken as a whole, it couldn’t possibly be real. Typically the trick is that some portion of the illustration is ambiguous. Is the staircase really turning a corner left there, or turning a corner right? The viewer’s interpretation, what’s in your mind when you look at the work, becomes an essential component to interpreting it.

The exhibit at the MFA contains some 50 works of art, including the 13-foot-long Metamorphosis II where tiled creatures change into shape after shape after yet more shapes, in a long series. In the placards next to each work of art, celebrities such as cellist Yo-Yo Ma are quoted giving their own thoughts on the piece.

Having seen a book of Escher’s works and long been familiar with his use in the high-tech community and academia, I had seen before most of the art on exhibit at the MFA, and it was delightful to see it in person. I had no idea that so many of them were woodcuts. They even have an original woodcut itself on display.

The Escher exhibit at the MFA will puzzle, challenge, and delight you. Don’t miss it!