Escape the Room’s Clock Tower is a Challenge but Lacks Story (3.5 stars) 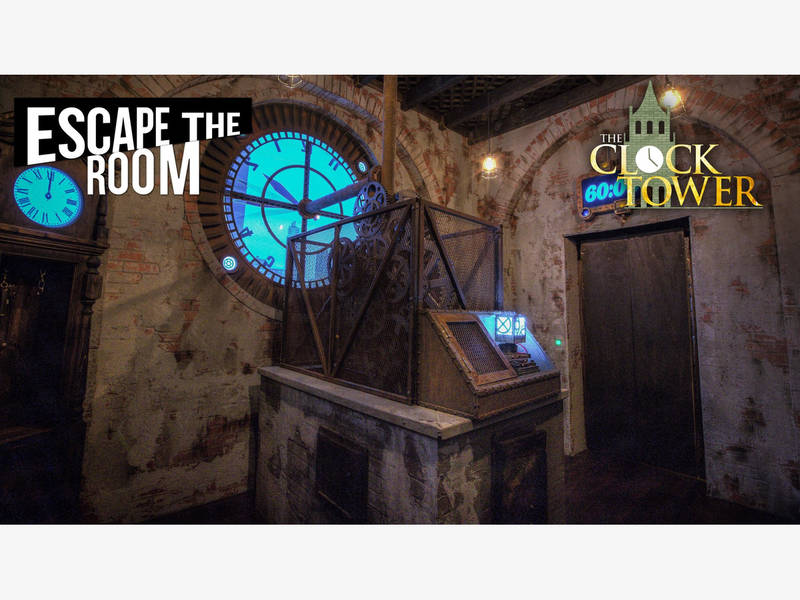 Escape the Room is a puzzle adventure, a sort of miniature theme park that takes place in a single room. First, they lock you in the room with clues. You solve the clues to get out, or fail to, in a single hour. Escape the Room now has branches 18 cities since I gave their “The Dig” attraction 5 stars in 2015.

This time, I went to review their newest experience, Clock Tower. Like the others, you bring friends or meet strangers to form a group of up to 10 people. You enter a room and solve puzzles for an hour. I am a big fan of escape rooms going back to the original Tomb at 5-Wits which I must have attended 15 times in 2007-2010, and more recently giving them 5 stars for their 20,000 Leagues Under the Sea and Spy adventures. So after three years, I was returning to Escape the Room with increased expectations.

While not at the theatrical level of 5-Wits, Escape the Room’s Clock Tower features creative and artistic set decoration. Its theme is time travel, so you’ll find clocks and mysterious tech gadgets, with video monitors providing special effects. Objects that you should not pick up are conveniently bolted down, helping you not to be led astray by red herrings. As you solve each puzzle, a drawer will magically open revealing fresh clues, or a door will open showing you into a new room! If you get stuck, your game host, monitoring you from the remote command room, can give you a hint. Our group got a ton of hints but still failed.

On the positive side, when we knew what we were doing, it was fun to do it. To use a fake example that has no spoilers, you might be given 12 watches and told to arrange them in pairs so that they added up to the same time, or asked to find all the plastic animals and group them by taxonomy (fish with fish, mammals with mammals). Performing tasks is the core of what we had previously experienced elsewhere, at 5-Wits. For example, in the now defunct Tomb (so I can talk about it), an Egyptian ghost asks you to search for hidden gems in the wall and press them (and they light up and chime when you do). That is a fun task that a big group can do in about three minutes.

Unfortunately, context is a major problem with Clock Tower. You spend most of your time wondering what you are supposed to do, instead of actually solving puzzles. This is frustrating instead of fun. If you were, for example, solving a murder mystery, then you can guess from the genre (or can be given it as part of a storyline) that you need to interview suspects, search for clues, and dust for fingerprints. But with a time travel adventure, and only a two-minute description that does not really set up a story, it just seemed too random. None of the puzzles made sense.

To use my non-spoiler fake example, what does sorting through watches have to do with time travel? Why would even a mad scientist put plastic animals in his time machine? Please don’t say that story doesn’t matter. Without context, if you’re given two cubes, you really don’t know if you’re supposed to put them together, or stick them on the walls, or whatever. You end up trying random stuff, and that’s not really puzzle solving, but being lost. Also, story is the bedrock of emotion. We want reasons to care about what’s at stake. (And if not, why should I bother writing a well thought-out review if I can just goob gab plib plob, oh the clocks let’s buzz and bops!)

It’s odd that Escape the Room reaches such heights of sophisticated visuals and gadgetry, but has low standards for storytelling. To give another example, the clue guide said afterwards that more successful groups separated into sub groups instead of everyone focusing on one task at a time. But nothing about the storyline or context suggested this.

A second problem was that the adventure did not scale well. Our group was only five people for a task that is normally ten. Escape the Room has experience with thousands of groups… by now they should know which hints and when to give them that will tend to get people to succeed, especially in a smaller group or with children. Or some of the puzzles should be optional for success for smaller groups. I was shocked to learn that only 26% of groups make it out of Clock Tower under an hour. I felt a bit cheated that our smaller-than-average, five-person group has an even lower (I assume) chance of succeeding, close to none. I’m not suggesting a phony challenge that is simply handed to you, but don’t most groups want to feel like winners? Just for commercial success, not to mention fairness, why wouldn’t you adjust your adventure to get more like 80% success?

A third issue that could be improved was the way that hints are given to struggling teams. Your guide sits in a remote monitoring room, issuing clues via a computer screen. Why not put the guide in the room? Maybe they do it remotely because automation means that guides require less training, saving money. Or perhaps they do it to save money so that a single guide can monitor two separate groups at once. (I was told that our guide was for us alone, though.) Putting the hint guide in the same room with us, as they do at 5-Wits, would enhance the experience in five ways.

First, an in-person guide can act theatrically, further bringing us into the story and making the experience more fun with their personality. Second, at Escape the Room, when you get a clue, it chimes and the whole group stops to look. The clues announce themselves without subtlety. You really cannot avoid feeling, “Oh we are stuck and need another clue. We must be stupid.” Whereas someone standing there in person can more discreetly give encouragement or even whisper a clue to just one person, so the group as a whole doesn’t take notice. Third, an in-person guide can encourage shy people to take part, so that overeager participants don’t always dominate. Fourth, sometimes even the clues (which understandably are not meant to reveal all) were hard to understand, something that a person in the room could sense and finesse better. These things are not possible the remote way that Escape the Room operates. Finally, even though Escape the Room seems shatterproof, someone inside the room can better watch that groups don’t break stuff or go too nuts.

Our clue guide had great energy and I was glad that he led us through the solution to the two puzzles we failed to complete. On the way out, an admin asked me, “Did you have a good time?” I guess he meant that in the way we ask strangers “How are you?” without expecting a genuine response, because when I began to talk shop about game design, he shot me such an evil eye look that I thought, Wow! This guy really hates me! (Or his job.) I said out loud, “Wow, you really don’t want me to talk with you!” and backed away, and he did not correct me.

Escape the Room offers several different experiences, and I can see that Clock Tower improves upon The Dig with its impressive visuals and special effects, but the game design and general setup is too problematic. Only 3.5 stars this time.