The Past Comes Alive for Tourists to York, UK 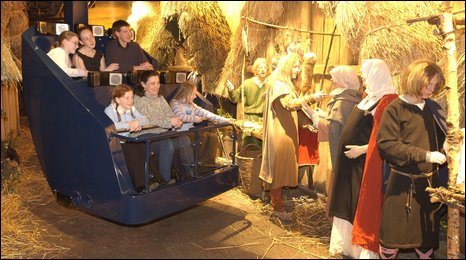 On a recent trip to the United Kingdom, we only had part of a day to spend in York, and wished that he had seen more. It is a fantastic destination well worth the drive from London. I recommend buying a “York Pass”, which gives you access to several destinations around York.

Jorvik is the old timey way of saying York, and the JORVIK Viking Centre is a 16-minute theme park style ride and a museum, which teach you about these ancient people. The ride itself is thrilling, featuring dozens of lifelike mannequins, many of which are animated, including animals and babies, and you get right up close to them. It’s very modern and sophisticated in how the dioramas are arranged to show local Viking life, as recently excavated by archaeologists. The audio comes in many different languages, and was a bit difficult to hear, especially when the animatronic characters were speaking over it, so I would recommend headphones be available. I also found the text distracting. It’s important to take a break and simply enjoy experiencing the ride. It holds quite a few surprises, including sound effects and even smells! And it works just as well for adults who want to learn as for children who may just want a visual spectacle. I felt that I was learning something real but also being genuinely entertained to “look” into the past.

On the way in, I didn’t quite catch the high-level background on the Vikings, which was either missing or easy for a weary tourist to miss. They came from where in Europe? They interacted with the English or ancient Celts in what way? But instead it was very personal. We learned a lot about the daily lives and personal stories of residents and crafts people, and the buildings they lived in.

Then when the ride is over, you can go through museum exhibits and actually see the artifacts that have been dug up. Separately, you can even visit a dig. They have volunteers speaking to kids in a corner of one room with seating. There are dozens of displays, all well curated and interesting. My favorite was the volunteer showing how coins can be made with a hammer mold. It ends in a cute gift shop.

Jorvik Viking Center is only medium sized, but it’s conveniently located in right in downtown York, so it’s next to the other shops, restaurants, and other attractions. We came in thinking from television and movies that Vikings were blood thirsty and always ready to fight in a battle. Then Jorvik Viking Center opened our eyes and we learned more about not only the men but also what the women and the children were up to, along with the elderly and the sick. 5 stars.

You can also see what an archaeological dig looks like, in a separate attraction called The Jorvik Dig, a hands-on archeological adventure giving kids a chance to become trainee diggers. The Merchant Adventurers’ Hall in York was built in 1357 for the merchants’ guild. Think of it as the ancient version of the Rotary Club or local Chamber of Commerce. It’s beautiful and old-looking.

The audio guide is necessary unless you know a lot about merchants. It was excellent and repeated basic points, so you don’t get too lost. This is important because often (such as at the Jorvik Center when we missed where the Vikings came from) weary tourists need a repeat of basic points to keep up with learning.

Oddly, the hall has been fitted for electricity and lighting, and even bathrooms and an aid elevator for wheelchairs. I would think they’d try to preserve the building as it was?

It’s worth a visit, but not hugely accessible. We did not feel an emotional attachment or get the big picture of what this was all about. From the outside it sure looks old, with outdoor seating and a little park. On the indoors, it was a strange mix of old and modern, with a cafe and electric lighting. Good for a quick peek, but perhaps not to stay for an hour. 3.5 stars.

The York Castle Museum is an extensive museum that connects weary tourists to the past better than any other museum we saw in the UK. For example, they have an exhibit on the history of toys, and another on fashion, but they don’t concentrate just on the 1500s or 1700s. They also include the 1900s and today. By putting old and new side-by-side, you can access the past so well. It’s remarkably interesting! You are required to walk through the museum in order, but at least you’ll never wonder what you’ve missed.

Their placards are short and easy to read quickly. They have a chocolate cooking exhibit, cooking chocolate bits and giving out samples. They work to put everything into a modern context, for example showing you how people’s teeth used to be. Or at what time of day people used to eat their meals, compared with today. It is innovative, covering medieval times but also every century up to the present day.

It’s not hugely technological, so you won’t find computerized exhibits or interactive VR for kids. They’ve got more like a little jungle gym, and a blackboard you can write on. There’s also clothing from the past that you can try on and take photos. Although much is behind glass, you can get right up close to exhibits including a stage coach and old bicycles.

The most delightful part of the museum was an entire preserved Victorian street of store fronts. These are actual old timey stores that were brought into the museum, one of them dating from 1640.

So, a rare 5 stars PLUS for the York Castle Museum.

We selected, but did not have time for, so much else that we could have done in York with our York Passes, including the Roman Bath Museum, the Richard III experience and Henry VII experience, the York Cold War Bunker, and Castle Howard. See my reviews of nearby Fountains Abbey and Studley Royal (4 stars), and The Forbidden Corner (5 stars PLUS).

See more about York tourism and the many destinations available with a York Pass at www.visityork.org and www.yorkpass.com.