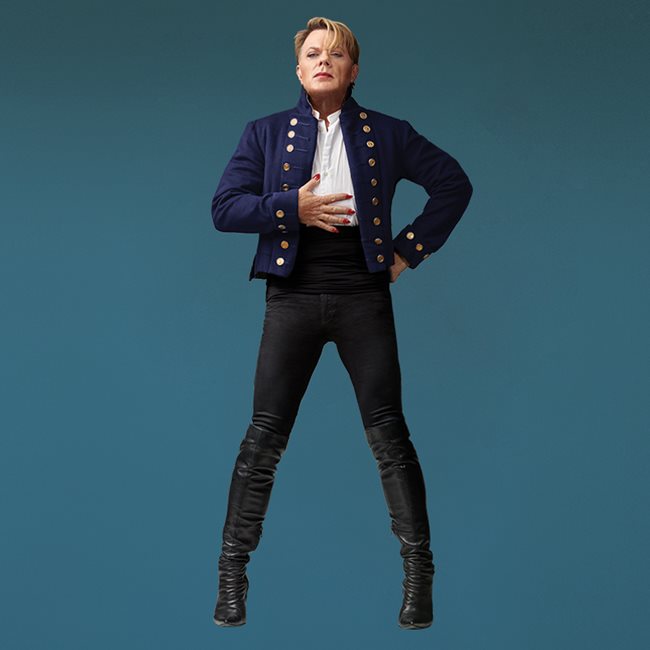 He’s unusual even for a comedian. Comedians make a career from observational humor, so they are smart and insightful. Eddie Izzard is beyond smart, a genius who has become one of the world’s top stand-up comedians, despite the prejudice of his coming out as transvestite and transgender in the 1980s. Or perhaps because of, because his confident embrace of his quirks makes him a hero to those of us who wished we’d be more ourselves.

Such inspiration is a theme of his new tour, Wunderbar, in which he modestly says that, if I can run back-to-back marathons, with an ordinary body, anyone can do it. You could do it. It’s all in your mind.

A  major part of Wunderbar is appreciating Eddie Izzard as a person, with his history of liberal commentary and accomplishments. He spoke to performing the Wunderbar tour in fluent French and German, and he performs comedy in Spanish as well. He ran 27 marathons in 27 days for charity. Next year he plans to run for political office in his home country of Britain, although he didn’t say which.

Eddie’s Boston show, at the Boch Center, took place without staging except for fog, a projected image with the tour name, and strangely bright columns of LED lighting that made looking at the stage uncomfortable. He came out in a skirt and leather jacket and spoke first to his transgender identity. (Earlier in his career he first called himself transvestite, but he described himself as transgender twice in the show.) Delightfully, after intermission he had a wardrobe change.

His stand-up act is delivered rapid-fire and breathlessly, a combination of intelligent commentary and silly humor inspired by Monty Python. He goes through the history of the Universe, describing the funny twists of evolution, religion, the Middle Ages, and then his own personal story including his father. He pokes fun at the definition of strange words, and then acts out scenes with wild voices and hand gestures.

A few nitpicks are possible. Sometimes Izzard’s words all run into each other, affecting his timing, and the dialogue moves so rapidly that if you lose focus for a moment, it’s easy to get lost. Of course in a large theatre any act will be partially disguised by reverb and audience reaction, so good diction and vocal clarity is a must. His having to hold a microphone in one hand sometimes impeded the asides and cutaway scenes that he acted out.

He pandered with the politician’s trick of making empty promises with oratory to make them sound profound, for example saying, “I don’t know what I’m going to do in politics, but I’ll definitely do more than nothing!” The comedy was sometimes laugh-out-loud funny, but sometimes just making amusing good points, but we liberals in Boston loved his points and cheered his persona.

Next year, should he be successful, he will put comedy on hold to enter politics. But he promised, “And then I’ll be back.”

See the Boch Center and Eddie Izzard on the web.