For the month of April I’m going to try posting once a day. Let me know if you like the extra content or if you think it’s just too much.

Of course my real goal is to encourage you to vote again for the Wheel Questions art project. You can vote every day through April and help us win $25,000 to spread community art. Over six months, 1,000,000 people will see it and 20,000 will join in. Please vote here.

Today’s topic is hiking locations. Because I write about one-shot events so much, I often overlook writing about recurring attractions and activities that deserve a shout-out.

The closest big parks to Boston are of course, Boston Common, the Rose Kennedy Greenway, and the Arnold Arboretum. I’ve never been a big fan of Boston Common, although across the street, the half they call Park Gardens is lovely. They’re going to make a carousel a regular feature in the Fall, I hope, and of course there’s wading in the summer and ice skating in the winter. On any given weekend there’s bound to be some kind of festival or road race in Boston Common, also. 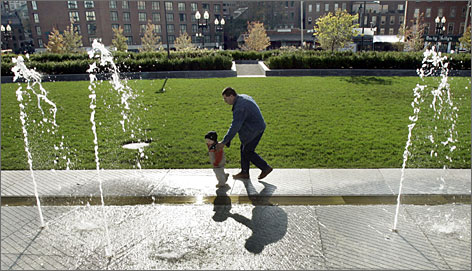 The Rose Kennedy Greenway is the new strip that they built on top of The Big Dig and you can get there on the South Station stop on the red line. It’s still pretty urban, but it’s long enough for a real walk, and it takes you down past the New England Aquarium and towards the North End, where there are great restaurants. They also will hopefully bring back their Spring/Summer carousel this year. The Rose Kennedy Greenway has a number of statues including one that spouts steam like a rocket taking off, and a fancy computer-controlled fountain. Once I made a bet that I could dance around in the fountain and predict all the squirts and not get wet.

Anyway, you’ll never get wet at the Arnold Arboretum. One of its secrets is that the paths are kept plowed and clear all year long, so it’s a good place to go if you feel like a long walk in the winter. Try to find the high hill with its great views. Of course, it’s a real arboretum, so the trees are from around the world, and all marked by species. They have a bonsai display, too and occasional events. Unlike the other urban parks, you can really get lost there or have a romantic moment with your partner alone. And of course, the Franklin Park Zoo and Franklin Park itself are nearby.

Speaking of this area, bring your kites or frisbees to Millenium Park, which is on the Veterans Memorial Parkway just south of the Arnold Arboretum. This is the place the local kite-flying clubs hold their events. I guess it’s especially windy.

Don’t be afraid to explore cemeteries, either. If you can ignore all the dead people, they can be great places not just to walk around but also to explore. The most culturally active ones, and the ones with the most famous people buried there, are the Mount Auburn Cemetery in Cambridge, and the Forest Hills Cemetery in Boston. Both have a variety of guided tours and events. Forest Hills Cemetery both does more and they have modern sculptures dotted throughout the cemetery. However, Mount Auburn Cemetery has a miniature castle tower from the top of which you can see all of Boston.

And lastly, you can’t go wrong with a walk along the Charles River. Just get off at the Harvard Square stop on the red line, or at Copley on the Green Line and walk south to the Esplanade, the big peninsula where they hold the July 4th concerts.

The email servers don’t like it when I do a blog with too many links, so I’ll let you Google all of that to find it. Now that I’ve hit on the major stuff, the rest of this week I’ll go a bit further out, with lesser known parks and hiking locations.

I’m doing my best here to bring you good content. Please take 30 seconds and vote again. As always, the full Johnny’s List of Weird Boston Events is at www.WeirdBostonEvents.org. Thanks!