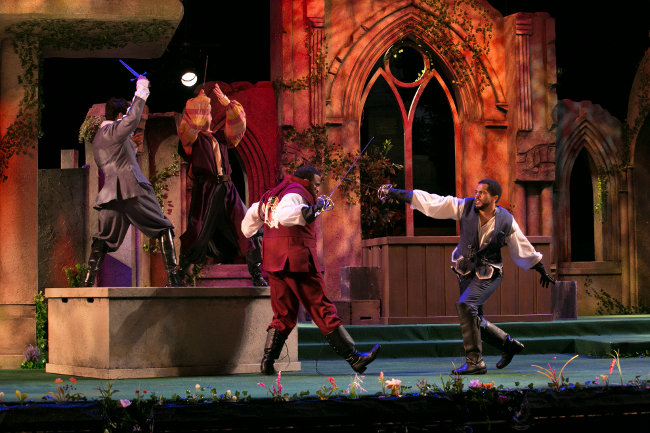 This summer’s outdoor production by Commonwealth Shakespeare takes place on Boston Common under the night sky, and it is completely free. You’ve never seen Romeo & Juliet like this. They showcase the nature of tragedy in two ways.

First, the show’s opening half is laugh-out-loud funny. Every line that could be read as comic is doubled the more so with the cast’s physical comedy, which also serves to make clearer Shakepeare’s Old English prose. Kudos to Kario Marcel who stole the show as Mercutio, the fool of the play. He becomes beloved to the audience as the untouchable comic relief, so his reaction to what happens in the tragedy is shocking to the core. Also kudos to Ramona Lisa Alexander as Nurse, whose larger than life comic portrayal threw a lifeline to the audience during the tragic half of the show.

Second, the portrayal of Romeo and Juliet, by John Zdrojeski and Gracyn Mix, plays up the foolishness of young love in a way that shows how unnecessary the tragic crash is. There are so many moments in this play when the train wreck could have been halted by calmer minds. Gracyn Mix took the best scene of the night in her portrayal of Juliet so in love that it becomes a nightmare of insanity. Love was transformed from something of beauty to something of horror, and the entire play rests on that twist. It’s creepy and thrilling, and ghosts even appear who come out partially into the audience.

As if that weren’t enough, there is swordfighting, with fight direction by Angie Jepson, where the attacks and ripostes seemed real. One attack that begins high minded is degraded by sheer rage into a brutal beating with fists. It’s horrifying. You can’t look away. It’s wonderfully effective at communicating base emotion.

And there’s a wedding, a masquerade ball with a wonderful dance, choreography by Peter DiMuro, and a funeral. The music ranges from prerecorded dance music to beautiful live guitar by Alex Deroo to underscore many scenes. I was delighted to find such a diverse cast, and without a weak performance, except possibly Paris, whom Adam Ewer plays as a straight stand-up guy, without a twist to make it his own.

You’ll hear all the famous lines you remember from high school, but also some surprises you won’t remember. Did you know that at the start of the play, Romeo begins head over heels in love with someone else entirely?

This play brings it all, and when the tragedy comes, the play ends quickly without tiring out the audience from grief. Thanks to costume design by Neil Fortin, you never get lost as to which character belongs to which family. Lighting design by Jamie Roderick effectively changes the mood and scene without needing any change of staging. The backlit forest to represent the rising sun was especially compelling. Kudos to the cast for taking out a dead body on a stretcher instead of the usual where the lights go down for a scene change and the ‘dead’ actor gets up and walks off stage.

You can bring a blanket, but for a good view it’s better to bring a chair, or you can rent one for a small price. I walked the circumference of the audience seated on the grass and confirmed that there were good views even in the back, with a sandwich shack and portable toilets available. A synopsis of the play is provided in the program, but unlike for some Shakespeare plays, you do not need to read it beforehand to follow the plot. There’s a brief intermission followed by a wonderful montage that summarizes and comments on the first half of the play.

An easy 5 stars for Romeo & Juliet. I know that theatre troupes get tired of doing the more famous plays, but this was the Commonwealth Shakespeare Company’s first “top ten” Shakespeare play they’ve produced on Boston Common since Othello in 2010, as I wrote in an analysis last year. See https://bostonevents.org/Boston/Loves-Labours-Lost-is-Delight-Silly-Physical-Comedy. After a difficult turn producing one of Shakespeare’s weaker plays last year, really only to the liking of serious theater-goers, I hope that more crowd pleasers are to come next year, perhaps Macbeth.

They may sacrifice some artistic diversity but in the service of attracting more Bostonians to try the theatre. After all, the outdoor venue is named Boston Common because it’s for everyone. Romeo & Juliet is just the accessible play for a warm summer night.